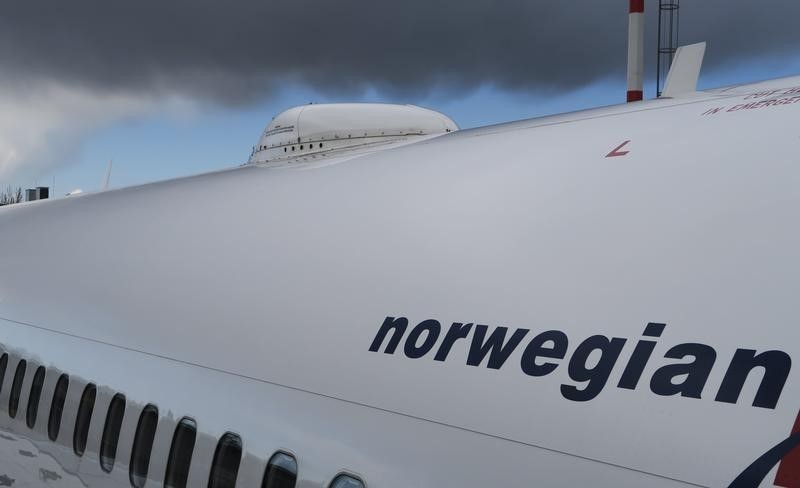 Investing.com — A characteristic of the coronavirus is that it seems to hit people with pre-existing conditions. The same appears to be true of companies.

Airlines, for example, have been roundly savaged by the markets since the outbreak began, as investors priced in a sharp drop in travel first within China, then to and from China, and, finally, globally. The International Air Travel Association said last week that the global airline business could lose $29 billion in revenue this year as a result of the outbreak.

But the airline that has suffered most, both in a European and a broader global context, is one that was already ill.

Norwegian Air Shuttle (OL:) has fallen 46% in the last week as the Covid-19 outbreak has spread decisively beyond Asia. It fell 12.7% by 5:30 AM ET (1030 GMT) on Thursday alone as its profit-making transatlantic routes came under serious threat for the first time, with the confirmation of the first case of locally-transmitted Covid-19 in the U.S.

Norwegian’s well-documented problems with debt and grounded Boeing (NYSE:) 737 MAX aircraft mean that it can’t afford to be flying half-empty planes across the Atlantic, but that is now the threat that it faces, given the increasing signs that the virus is spreading on both sides of the ocean.

The new blow comes just as the restructuring actions taken by new CEO Jacob Schram had appeared to be gaining traction: passenger load factor, a measure of available capacity use, rose to 80.9% in January from 76,1% a year earlier. The airline was able to target a profit for the coming year, even if it didn’t quite convince investors it could do that well (the stock fell over 8% on the day).

Schram outlined further cuts to the carrier’s network two weeks ago when he unveiled its fourth-quarter results, and the airline now intends to cut available seat kilometres by as much as 15% this year.

But part of that announcement was a decision to double-down on U.S. routes. While the relative strength of the U.S. economy made that appear quite logical, the timing has proved unfortunate.

Norwegian isn’t alone in its troubles. Short-haul specialists Ryanair (LON:) and Wizz Air (LON:) have both fallen 21% in the last week as the virus reached Europe, while EasyJet (LON:) has fallen 27%. But none of those has the same kind of profitability problems as Norwegian, which lost over 2 billion kroner ($213 million) before tax in the fourth quarter, and which is struggling to cut debt as quickly as it’s cutting the ability to generate revenue to service that debt.

So far this year, Norwegian has underperformed the two New York-listed Chinese airlines (China Eastern (NYSE:) and China Southern (NYSE:)) by over 20%. The Chinese airlines, however, have shown signs of bottoming out in the last few days. Their European counterparts show no such trend.