Home
Market
StockBeat: Dudley Bows out of BP With a Flourish
Prev Article Next Article
This post was originally published on this sitehttps://i-invdn-com.akamaized.net/news/LYNXNPEC810D5_M.jpg 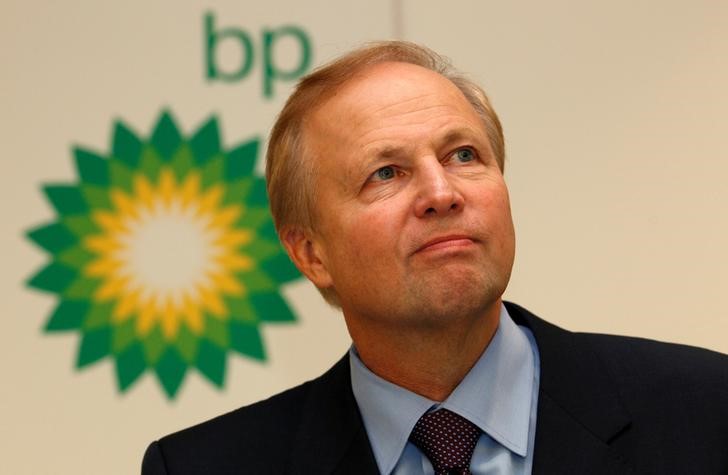 Investing.com — BP (LON:) chief executive Bob Dudley bowed out on the sweetest of high notes on Tuesday, raising the company’s dividend less than a week after arch-rival Royal Dutch Shell (LON:) had been forced to cut the rate at which it returns cash to shareholders.

The company raised its quarterly payout to 10.5 cents a share, from 10.25c previously, after its preferred measure of underlying profit fell less than expected in the fourth quarter of the year. According to data compiled by Investing.com, that takes the yield on one of the U.K. 100’s most reliable dividends up to 7%. The BP (LON:) share price rose 4.5% in response, while the FTSE 100 rose only 1.2%. The benchmark index was up 1.0%.

By contrast, Shell (LON:) had been forced to cut its buyback plans for this year by 60%, and while it left its dividend untouched, the accompanying rise in net debt put questions marks over its ability to stay so free with its cash. Shell, for its part, is now yielding 7.39%.

BP (LON:), at least, is bringing in more cash in these days than it used to. The acquisition of BHP’s shale assets in the U.S. kept the expected decline in upstream profit to less than one-third, and the headwinds from the Gulf of Mexico spill a decade ago continue to drop: this year, BP will pay less than $1 billion in costs related to that accident, down from $2.4 billion last year.

But the sustainability of the new dividend is still likely to be tested. Production is likely to fall from last year’s average of 2.6 million barrels of oil equivalent a day in the current quarter due to the ongoing disposal program, while the company also expects lower refining margins and bigger discounts for its heavier north American crude blends.

Most worrying, naturally, is the impact of the novel coronavirus on global oil demand. Chief financial officer Brian Gilvary told Bloomberg on Tuesday that the company sees the virus wiping out one-third of all forecast demand growth this year – a reality check to those still hoping for a V-shaped rebound in global demand and economic activity. Gilvary said the demand destruction is likely to be in the range of 300,000-500,000 barrels a day.

Given that BP (LON:) and other majors weren’t able to cover their capex and dividends at even $60 a barrel the last time oil prices collapsed in 2015/6, this represents some remarkable progress. But, as Tuesday’s presentation made clear, it depends on rapid sales of marginal assets. BP is targeting over $15 billion in disposal proceeds by the middle of next year. The company may be well on top of its core projects, but unless crude prices turn around, the risk is that it will have to sell some of its better assets to meet that target.