Home
Market
StockBeat: The Harder the Fall, the Higher They Bounce
Prev Article Next Article
This post was originally published on this sitehttps://i-invdn-com.akamaized.net/news/LYNXNPEC480UK_M.jpg 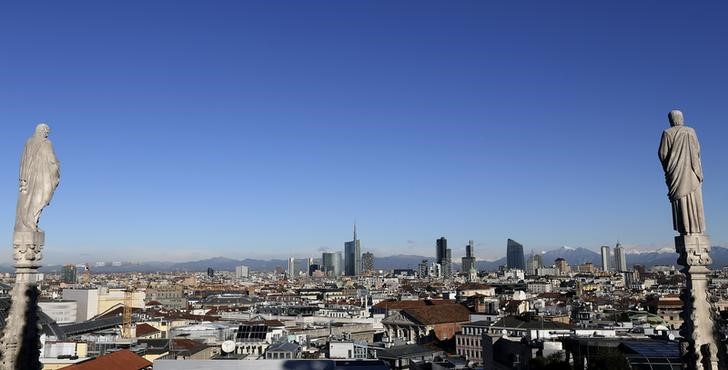 Investing.com  — There’s a broad-based rebound in European stocks on Tuesday, and those performing best are largely those who had the biggest declines in recent weeks.

The Italian and Russian stock markets lead the way: Italy, because the country has now posted two straight days of declines in new Covid-19 infections and a slowdown in the mortality rates (although some doubts have been expressed about the reliability of the data). The FTSE MIB was up 6.7%

“This doesn’t mean we can be sure the downshift in Italy will continue, but the data give real grounds for hope,” Pantheon Macroeconomics’ chief economist Ian Shepherdson said in a note to clients.

Another factor lifting Italian assets is reports citing German officials as saying that they would approve a loan for the country from the European Stability Mechanism – the euro zone’s regional sovereign bailout fund – without significant conditions on its future fiscal and economic policy.

Among the biggest gainers are Salvatore Ferragamo and Moncler. The two luxury groups had been among the worst hit by the collapse in Chinese demand when the Covid-19 outbreak began there. Things turned worse when the pandemic shut their production facilities in northern Italy down.

The 10-year yield spread spread with Germany, which peaked above 300 basis points last week, now appears to have stabilized below 200 basis points. Even so, both the Italian and other peripheral bond spreads are widening after German Economy Minister poured cold water on calls from Spain, Portugal and Italy in the last week for the euro zone to issue debt jointly (‘corona bonds’), something that’s still taboo in Germany and elsewhere in northern Europe.

Russia, meanwhile, is bouncing because crude oil is up on hopes that the U.S. will make some kind of diplomatic move to end the price war, and because the worldwide rush for dollars appears to be easing in the wake of the Federal Reserve’s decision to open the liquidity taps even further on Monday with its announcement of unlimited quantitative easing and its first-ever purchases of corporate debt. Both those factors have stabilized the ruble, which is now back at 78.8 to the dollar, having touched 81.0 last week. The RTS index was up 8.1%

The biggest gainers in Russia are, however, not oil companies but miners. Norilsk Nickel (MCX:GMKN) was up 15.0%, as prices for platinum group metals found a bottom – at least temporarily –  and gold and silver miner Polymetal International PLC (LON:POLYP) was up 11.8%, reflecting sharp rebounds in those metals as forced selling of speculative positions abated.

Elsewhere, BP (LON:BP) rose 27% on hopes that it will avoid cutting its dividend, while Royal Dutch Shell (LON:RDSa) stock and Total SA (PA:TOTF) stock added to Monday’s gains after announcements. Anglo American (LON:AAL) stock rose 8.0% and Rio Tinto (LON:RIO) stock rose 7.3%, shrugging off announcements that they had had to suspend operations in South Africa due to public health measures. Rio has also had to limit operations in Quebec, Canada.