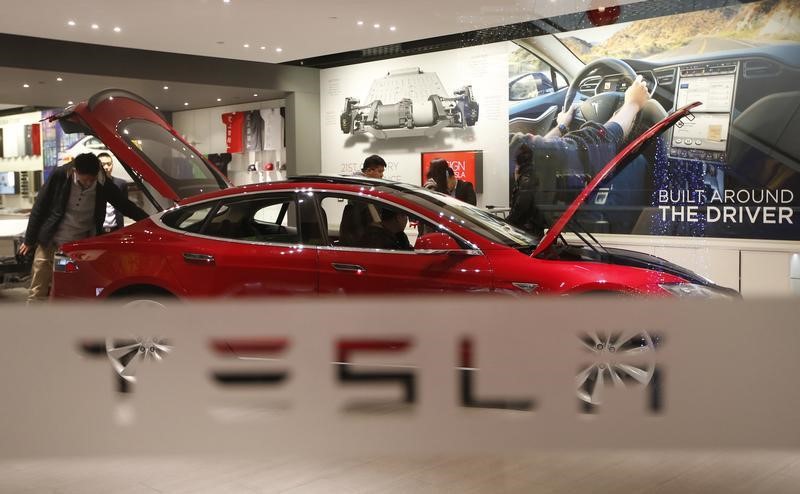 But one stock in particular hogged participants’ attention.

Tesla (NASDAQ:) stock shot up another 16% to a new record high as the company’s recent rally sucked in more and more momentum-based traders. The stock has received several upgrades from Wall Street analysts since a fourth-quarter report that appeared to end most doubts about its ability to scale up production.

CEO and founder Elon Musk said at the time that he expected profit and positive cash flow to be the norm in future quarters after a difficult couple of years in which he repeatedly had to tap the capital markets to build new production capacity in the U.S. and China.

That price valued it at $159 billion, or just over six times its trailing 12-month sales – a valuation more usually seen in tech stocks than in autos.

The surge means more pain for those who have shorted Tesla (NASDAQ:) stock. Short interest in the stock was 18% of the free float at the start of trading, according to data compiled by Shortsqueeze.com.

Overnight, the People’s Bank of China had nipped in the bud a rout in Chinese financial markets, pumping 500 billion yuan (over $71 billion) into the market to “ensure adequate liquidity” as the country grapples with an economic seizure caused by the novel coronavirus.

Optimism was bolstered by a healthy 1.8% rebound in December in the U.S. – albeit November’s number was revised down to a 1.2% drop from the -0.7% originally reported.

There were also signs that markets were pricing in a higher chance of President Donald Trump’s reelection in November after the chaotic Democratic caucuses in Iowa, which gave an unflattering picture of the party’s internal state.

One large-cap missed out on the rally, however. Alphabet (NASDAQ:) stock fell 4% after the Google parent posted disappointing revenue growth and profit for the fourth quarter. The company published a more detailed breakdown of its revenue than usual, but analysts were underwhelmed to realize that YouTube appeared to squeeze less than $8 out of its average user last year.