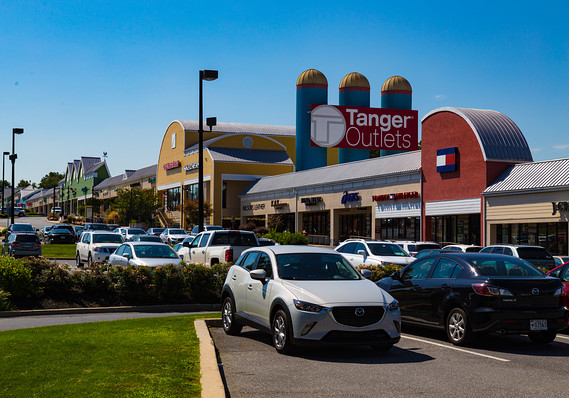 The Tanger Outlets in Lancaster County.

Shares of Tanger Factory Outlet Centers are rocketing higher even as doubts about the future of bricks-and-mortar retailers continue to plague the company, one of the pioneers of outlet-store shopping.

But the big share move upward isn’t because investors have had a change of heart about the “retail-pocalypse”. Rather, Tanger’s declining share price has led its market capitalization to fall below the threshold that keeps it in a popular exchange-traded fund and the ensuing action in the stock is driving its price higher. That’s because Tanger SKT, -4.51%   is one of the stocks that attracts the most interest from short sellers, who bet its price will go down.

As the deadline for removal from the fund draws closer, those investors are caught in what’s known as a “short squeeze.” They’re being forced to buy back shares to close out their positions, thus inflating the share price and, with it, market capitalization.

It’s a situation that raises bigger questions about how ETFs are constructed and what’s in the best interest of investors in the fund. For now, this situation is unprecedented, ETF industry participants say, and those who spoke to MarketWatch had varying views.

“This is the first case where you see the negative effects of high passive ownership,” said Alex Pettee, president and director of research at Hoya Capital Real Estate. “It challenges the notion that it’s always a net-positive (for a stock) to be added to these indexes.”

See: Want to profit from the housing shortage? There’s a new ETF for that.

Dave Nadig, an industry veteran now serving as chief investment officer and research director at ETF Flows, takes a different view. “This shows that a part of the market that everyone always has concerns about is working,” he told MarketWatch. “The plumbing of the market is doing exactly what it’s supposed to be doing.”

In this case, speculation has been building for weeks that Tanger will be kicked out of the index that underlies the SPDR S&P Dividend ETF SDY, -1.04%  , known as the S&P High Yield Dividend Aristocrats. Documents that lay out how the index is constructed explain that companies currently part of the index must have a float-adjusted market capitalization greater than or equal to $1.5 billion as of the “rebalancing reference date,” which in this case was Dec. 31.

In order to close out its position, the fund manager must have all its shares back from being loaned out. As short sellers have been forced to buy back shares of the company they’d previously bet against, it’s driving the price higher. In fact, the stock is over 11% higher in the year to date, compared to a 3% increase for the S&P 500 SPX, -1.57%  .

Tanger missed that market cap threshold as of Dec. 31, but on Friday, was back above it, at $1.522 billion, according to FactSet. Pettee believes that media company Meredith Corporation MDP, +1.21%  , another holding in the index, will also lose its place, for the same reason.

S&P Global, the index owner, declined to comment. State Street Global Advisors, owner of the SPDR suite of ETFs, did not immediately respond to a request for comment.

The committee that oversees the High Yield Dividend Aristocrats index meets Friday, and it’s unclear how they’ll respond to Tanger’s shifting fortunes. “The committee could choose to make exceptions to their rules because of extraordinary circumstances, but I don’t know that this is extraordinary,” Nadig said.

Related: It’s hard for shoppers to avoid Amazon — even in their investments

But for Pettee, the unusual situation raises uncomfortable questions. It’s standard industry practice in a situation like this for the fund manager to start reaching out to other market participants to line up a clean trade: finding a buyer willing to assume the position at a price that roughly makes investors whole. But State Street’s huge position as the largest holder of the stock — 21 million shares or more than one-fifth of the float — skews that calculus, Pettee thinks.

“It challenges the conventional wisdom that bigger is always better. If these ETFs are moving markets with their methodology changes that’s not good for the end investor,” he said.

Pettee also thinks shareholders of the ETF are “potentially hurt by the need to be a forced seller. This is not an efficient way to dispose of a long position,” he said.

Nadig disagrees. “Think about the impact to the investor holding the fund,” he said. “He’s been holding a garbage stock that’s been going down in price. Now this activity of calling in the shorts has caused it to spike.”

Pettee, who includes a real estate-focused ETF under his watch, takes a slightly different view of the company’s fortunes. Tanger wasn’t just a pioneer of the retail outlet mall space, he noted, it had also managed to hang in even as online shopping devastated large swathes of bricks-and-mortar retailing.

What’s more, the company is a “yield-seeker favorite,” Pettee said, because it’s raised its dividend consistently for years. In an early January research note, analysts at Citi said they believe the dividend is “safe for the time being. Additionally, without department store exposure, [Tanger] has much lower capital needs than mall REIT peers, and leverage is relatively low,” they wrote.

Tanger did not immediately respond to a request for comment.

Nadig, meanwhile, was more focused on the logistics of the situation. “This tiny little company meets a weird mechanical hiccup that just might rescue it,” he said.

Related: Malls are dying. There aren’t enough homes. Is there a solution?