Home
Stocks
TaxWatch: Here’s what the Democratic presidential candidates want to do to your taxes
Prev Article Next Article
This post was originally published on this site 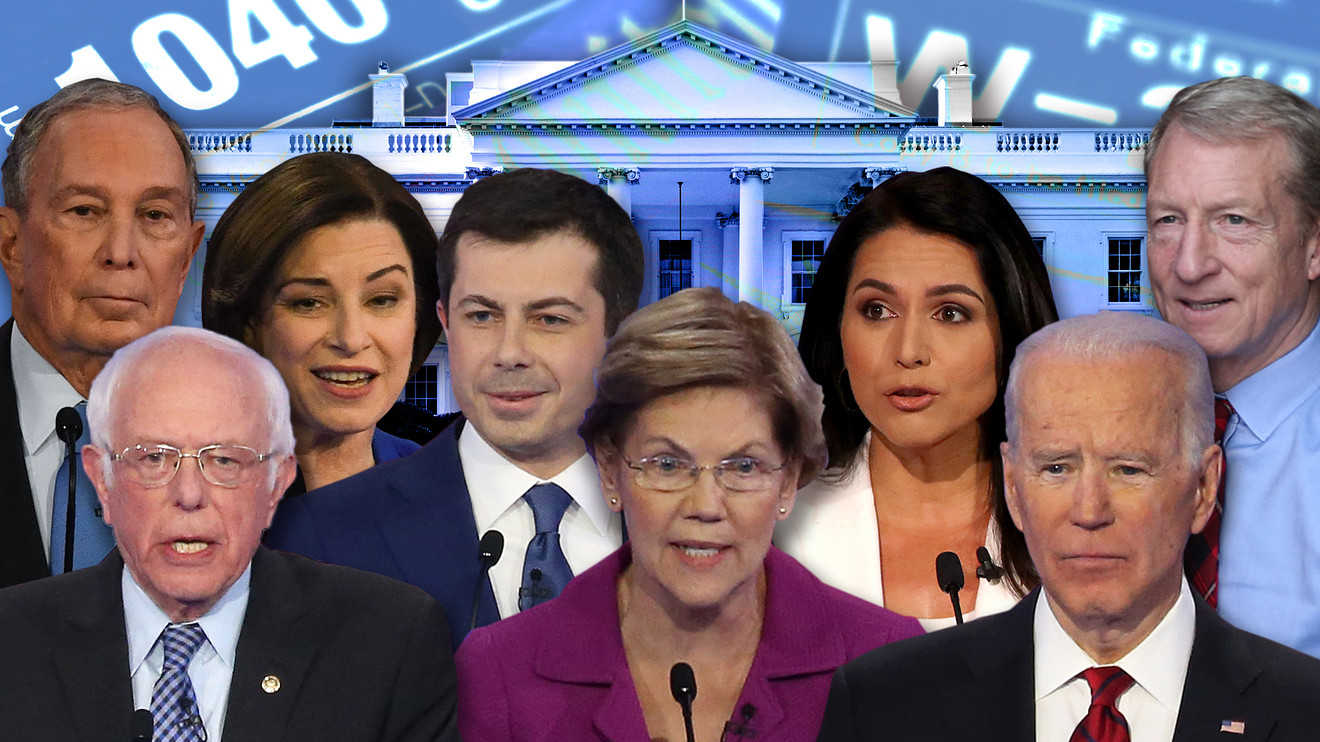 Democratic candidates have varying approaches when it comes to tax policy.

Taxes are at the heart of the Democratic presidential race.

As candidates focus on growing income inequality and propose large scale health and higher education plans to address the problem, more taxes — for corporations and the rich — are the way they want to underwrite their proposals.

For example, Sen. Bernie Sanders and Sen. Elizabeth Warren have proposed wealth taxes, an added levy on millionaires and billionaires, to pay for expanded health care and student loan cancellation.

The competing tax proposals come three years after President Donald Trump overhauled the tax code to reduce income tax rates for individuals and businesses. One provision lowered the personal income tax rate for top earners to 37% from 39.6% and another provision reduced the corporate income tax rate to 21% from 35%. Trump is expected to reveal another round of tax cuts later this year.

Every Democratic presidential hopeful says Trump’s tax cuts went too far, and they are all vowing to raise taxes on the rich and corporations. Aside from that, there are differences in the candidates’ proposals and the extent of taxation they say they want.

Here’s how the plans stack up against each other:

Sanders would also end the so-called “Step-Up in Basis,” a provision that restarts asset appreciation, for capital gain tax purposes, upon inheritance.

Capital Gains Tax: The IRS taxes the sale of an asset that’s grown in value over time, such as a stock. Taxpayers making at least $78,750, and filing single, are taxed at 15%. With some exceptions, single taxpayer earning above $434,550 face a 20% capital gains tax. Sanders’ capital gains tax rate would be the same as the income tax rate for households making over $250,000.

Income Taxes: Biden is proposing to revert the top income tax rate back to 39.6% for earnings above $510,000. Biden would also limit itemized deductions to a reduction of 28% of tax liability. Biden would apply a 12.4% payroll tax on wages above $400,000.

Estate Taxes: Biden would eliminate the step up in basis.

Capital gains: Biden would tax capital gains at the same rate as ordinary income for households making over $1 million — in other words, at 39.6%.

Financial Transactions Tax: None specifically proposed, but Biden has said he supports the concept.

Income Taxes: Buttigieg is proposing to revert the top income tax rate back to 39.6%. He would broaden eligibility for the Earned Income Tax Credit, a long-standing tax credit for low-income working families. He would repeal the $10,000 State and Local Taxes deduction cap for households earning less than $400,000. He would also assess a 12.4% payroll tax on wages above $250,000.

Estate Taxes: Buttigieg would eliminate the step up in basis.

Corporate Taxes: Buttigieg would revert the corporate income tax rate back to 35%

Capital Gains Tax: Buttigieg would tax capital gains at the same rate as ordinary income for the top 1% of households — i.e. at 39.6%. As the consulting firm Andersen notes, Buttigieg would also implement “mark to market” taxation, where the top 1% of taxpayers would pay a yearly tax on the appreciation of their assets. Assets like stocks are now taxed only at the time of sale.

Income Taxes: Klobuchar would bring the top income tax rate back to 39.6% and apply a 30% minimum rate on taxpayers with adjusted gross income above $1 million. She also wants to expand the Earned Income Tax Credit. She would boost the maximum credit by approximately 30% and widen eligibility.

Income Taxes: Bloomberg would bring the top income tax rate back to 39.6%. He would also broaden eligibility for the Earned Income Tax Credit.

Wealth Tax: Bloomberg is proposing a 5% additional tax on household incomes above $5 million.

Estate Taxes: Bloomberg would eliminate the step up in basis.

Financial Transactions Tax: Bloomberg is offering a phased-in tax that will eventually result in a 0.1% tax on all stock, bond and derivative trades. The tax would start at 0.02%.

Income Taxes: Warren would bring the top income tax rate back to 39.6%, and assess a 14.8% high income social security tax on the top bracket.

Estate Taxes: Warren would eliminate the step up in basis.

Capital Gains Tax: Warren would tax capital gains at ordinary income rates for the richest 1% of households. The consulting firm Andersen noted that Warren would also implement “mark to market” taxation, where the top 1% of taxpayers would pay a yearly tax on the appreciation of their assets.

Corporate Taxes: Steyer would bring the corporate income tax rate back to 35%.

Income Taxes: Gabbard has not proposed income tax changes, but she would propose an increase in payroll taxes to go towards Social Security, according to the Urban-Brookings Tax Policy Center, a left-leaning think tank focused on tax policies.