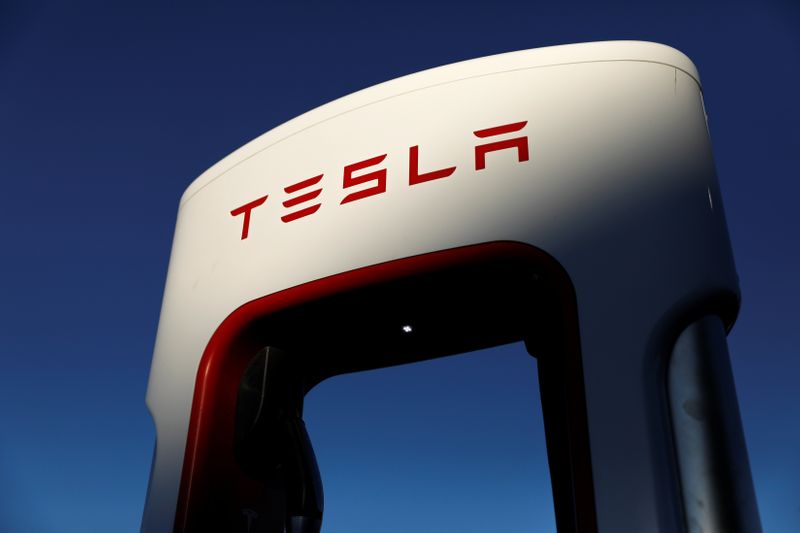 By Akanksha Rana and Tina Bellon

(Reuters) – Tesla Inc (O:) on Wednesday posted the second quarterly profit in a row on record vehicle deliveries and said it would deliver more than 500,000 units this year, as the electric carmaker’s shares surged to new highs.

Tesla on Wednesday said the manufacturing process at its new Shanghai factory was running as expected and said it would increase production of its mass-market Model 3 due to strong demand in China.

The company also said it has started production of its new Model Y, an electric crossover utility vehicle, at its Fremont, California plant this month and plans to deliver the first models by the end of March, ahead of schedule.

Investors overall are betting that Tesla has overcome its production, legal and management struggles and is leading the industry on technological innovation for the next generation of cars.

The investor appetite also is a boon to Tesla CEO Elon Musk, whose mercurial behavior forced him to step down as chairman after a series of scandals and investor doubts about Tesla’s ability to withstand competition from larger, better capitalized global rivals.

Cost efficiencies and high production volumes should allow it to ultimately reach an industry-leading operating margin, the company said. It reported a 4.9% operating margin in the fourth quarter.

“The point Tesla is already starting Model Y production in Fremont was the most notable item in the release. For a company that has always been late, this is a big improvement. First they were looking at a late 2020 Model Y ramp, then pulled forward to summer time, and now we have production in 1Q20,” Roth Capital Partners analyst Craig Irwin wrote in a note.

The company’s cost efficiencies become apparent when comparing revenue and profit on a per-vehicle-basis. A review of Tesla’s results showed that even though revenue per unit delivered rose by only 3% on a quarterly basis in the fourth quarter, operating profits per vehicle rose by roughly 19% in the same time. (Graphic: https://tmsnrt.rs/2uMjS2U)

Tesla’s stock has more than doubled in value since the company posted a third-quarter profit, beat estimates for 2019 vehicle deliveries and ramped up production at its Gigafactory in China.

The latest rally pushed the company to a valuation of more than $104 billion and some analysts questioned the rationale.

“It has a fantastic brand, formidable manufacturing capabilities and (by all accounts) a fabulous product; but is it really worth more than Volkswagen (DE:),” said Hargreaves Lansdown (LON:) analyst Nicholas Hyett.

Volkswagen produced nearly 11 million vehicles in 2018 and reported an operating profit of 13.92 billion euros ($15.44 billion) in the same year.

Boosted by strong demand for its vehicles in Europe and China, Tesla on Wednesday said its cash balance increased to $6.3 billion.

In the three last three months of 2019, total operating expenses rose less than 1% to $1.03 billion.

The company has been trying to keep a tight lid on costs but its new initiatives, which also include the construction of its first European factory in Germany, an electric pickup truck, a new generation of the Tesla Roadster and automated driving features, are likely to put a strain on its cash pile.

The company’s financial results have fluctuated widely in the past and many investors remain skeptical that Tesla can consistently deliver profit, cash flow and growth.

Excluding items, Tesla earned $2.06 per share. Analysts were expecting a profit of $1.72 per share, according to IBES data from Refinitiv.