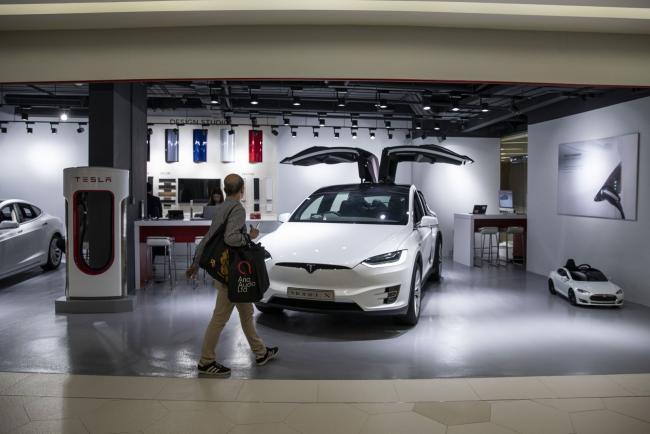 Shares of the electric-vehicle maker fell 9.4% to $803.63, after rising as high as $968.99 Tuesday amid what looked like an unstoppable advance. The breather comes as analysts at Canaccord Genuity cut their rating on the stock to hold following an “electrifying run” on concerns that its Shanghai factory may struggle as China works to contain the coronavirus.

“Look, everybody has a pain threshold,” Steve Eisman, senior portfolio manager at Neuberger Berman Group, told Bloomberg Television’s Tom Keene Wednesday. “When a stock becomes unmoored from valuation because it has certain dynamic growth aspects to it, and has cult-like aspects to it, you have to just walk away.” The investor who bet against subprime mortgages before the 2008 financial crisis said he has covered the short in Tesla he disclosed in 2018.

The rapid run in Tesla shares over the past three months, which accelerated to a dizzying pace over the past week, came on the back of two strong quarterly reports, the quick construction of its China factory, an ahead-of-schedule launch of the new Model Y crossover vehicle and a first profit for the battery plant the company jointly operates in Nevada with Panasonic Corp. Some also pointed to the significant amount of short interest in Tesla and said at least part of the rally was explained by investors exiting bearish positions.

“Many investors are struggling to identify a strong fundamental underpinning for the move,” Morgan Stanley (NYSE:) analyst Adam Jonas wrote in a note to clients, adding that investor feedback from the discussions has been “calm, curious and overall cautious.”

That sentiment may have finally caught up with the stock, starting with the jaw-dropping $109 drop in the price right before the closing bell on Tuesday. The stock closed at $887.06, bringing its 2020 gains to 112%.

Wall Street is pedaling back on some of its enthusiasm, with Canaccord Genuity’s Jonathan Dorsheimer downgrading Tesla to hold from buy, warning of a likely “reset of expectations” in the first quarter and flagging China’s coronavirus as a clear headwind to the Shanghai facility.

Meanwhile, Chief Executive Officer Elon Musk, who added $17.6 billion to his own fortunes on the back of the rally since the beginning of the year, teased the possibility of a new factory in Texas by asking his Twitter followers to vote on the idea.

“At the end of it all, there’s a big sentiment shift,” said Ben Kallo, a Baird analyst with the equivalent of a hold rating on Tesla’s stock. “Eighteen months ago, this was a company going out of business, everyone said. Now, it’s a business people want to invest in. Institutional growth investors are starting to look at it as a real company that can make money.”