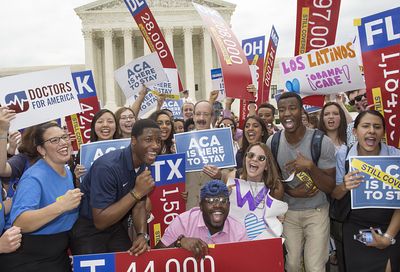 A majority of Americans have favorable views of the Affordable Care Act, according a poll conducted by the Kaiser Family Foundation. But does that mean they are fans of the original requirements of act when it was introduced in 2010?

Some 55% of Americans support the ACA, a record high since the law went into effect a decade ago, according to a new report by the Kaiser Family Foundation, while 37% of the 130,000 respondents in the nationally representative poll hold unfavorable views.

In 2010, when Obamacare was enacted, 46% of the public had a favorable opinion of it and 40% had an unfavorable view. Kaiser, a San Francisco-based nonprofit focused on health policy; it has conducted monthly public opinion polls on the ACA since it was enacted in March 2010.

Ahead of the ACA’s ten-year anniversary, three researchers from the foundation’s public opinion team also published an in-depth analysis of the 102 polls conducted that was published in Health Affairs, a peer-reviewed journal. (That did not include this latest poll released on Friday.)

After President Trump was elected in 2016, “the threat of repeal became so real,” said Mollyann Brodie, the lead author of the report. “It was easy for Democrats to say, ‘Look at this president he’s trying to take your health insurance away from you.”

Also see: As recovery continues, fears that ACA would cause employers to shift to part-time work don’t materialize

In the most recent Democratic debate among candidates seeking that party’s nomination for president, health care was in the spotlight. Both Senators Bernie Sanders of Vermont and Elizabeth Warren of Massachusetts reiterated their plans to enact “Medicare for All.”

If passed, Sanders’ plan would prevent 153 million Americans from obtaining employer-sponsored health insurance, an earlier Kaiser study found. Since 2009, average family premiums have increased 54% and cost $20,576 a year in 2019.

“Partisanship has not subsided when it comes to overall views of the law,” the study states. Given how divided lawmakers and voters are when it comes to “health-care arrangements it would be even harder to get bipartisan support for a Medicare for All plan,” Brodie said.