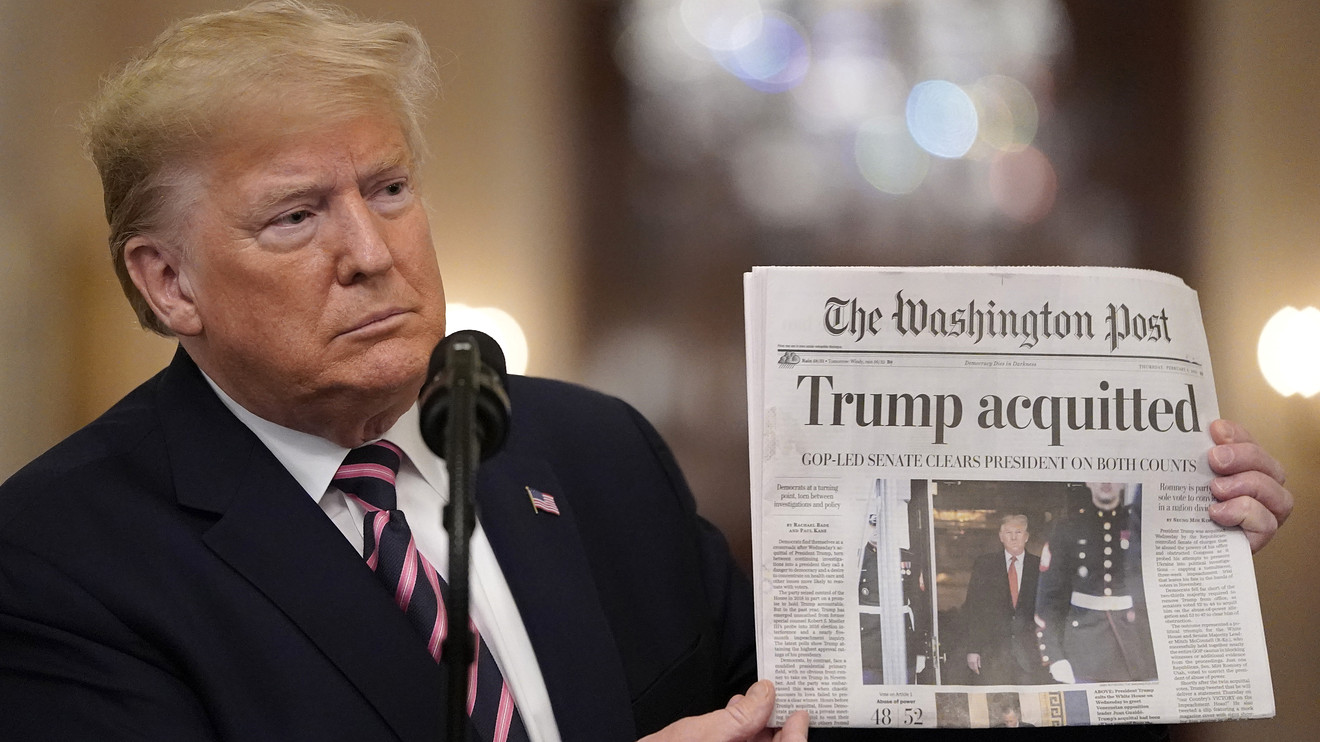 All 47 Democratic senators voted to convict the president on both charges. Senator Mitt Romney of Utah was the only Republican voting to convict for abuse of power.

The Republican senators’ speedy exoneration of Trump marks perhaps the most dramatic step in their capitulation to the president over the past three years.

That process, as I wrote in The Conversation last fall, recalls the ancient Roman senate’s compliance with the autocratic rule of the emperors and its transformation into a body largely reliant on the emperors’ whims.

Along with the senatorial fealty that was again on display, there was another development that links the era of the Roman Republic’s transformation into an autocratic state with the ongoing political developments in the United States. It’s a development that may point to where the country is headed.

Leader is the state

Trump’s lawyers argued that the president’s personal position is inseparable from that of the nation itself. This is similar to the notion that took hold during the ascendancy of the man known as Rome’s first emperor, Augustus, who was in power from 31 B.C. to A.D. 14.

Trump defense attorney Alan Dershowitz asserted that “abuse of power” by the president is not an impeachable offense. A central part of Dershowitz’s argument was that “every public official that I know believes that his election is in the public interest” and that “if a president does something which he believes will help him get elected in the public interest, that cannot be the kind of quid pro quo that results in impeachment.”

This inability to separate the personal interests of a leader from the interests of the country he or she leads has powerful echoes in ancient Rome.

There, no formal change from a republican system to an autocratic system ever occurred. Rather, there was an erosion of the republican institutions, a steady creep over decades of authoritarian decision-making, and the consolidation of power within one individual — all with the name “Republic” preserved.

Much of Rome’s decline into one-man rule can be observed in a series of developments during the time of Augustus, who held no formal monarchical title but only the vague designation “princeps,” or “first among equals.”

But in fact the senate had ceded him both power (“imperium” in Latin) over Rome’s military and the traditional tribune’s power to veto legislation. Each of these powers also granted him immunity from prosecution. He was above the law.

Augustus’ position thus gave him exactly the freedom from oversight — or what Trump calls “presidential harassment” — that the president demands. Such immunity is also the sort that Richard Nixon seemed to long for, most famously in his post-presidency declaration that “when the president does it, that means that it is not illegal.”

So, for example, under Augustus and then his successor Tiberius, insults against the emperor could be considered acts of treason against the state, or, more officially, against “the majesty of the Roman people.”

A critic of the “princeps” — be it in unflattering words or in the improper treatment of his image — was subject to prosecution as an “enemy of the people.”

A physical demonstration of the emerging union of the “princeps” and the state came in the construction of a Temple of Roma and Augustus in cities across the Mediterranean region.

Here the personification of the state as a goddess, Roma, and the “princeps” Augustus were closely aligned and, what is more, deified together. The message communicated by such a pairing was clear: If not quite one and the same, the “princeps” and the state were intimately identified, possessing a special, abiding authority through their union.

Many higher-ups in the Trump administration, from Secretary of State Mike Pompeo to former Secretary of Energy Rick Perry to former Press Secretary Sarah Huckabee Sanders, have spoken publicly of Trump as a divinely chosen figure. And Trump himself declared earlier this year, “I do really believe we have God on our side.”

To this point, however, a Temple of Lady Liberty and Trump along the lines of the Temple of Roma and Augustus has not yet been constructed.

Will the GOP-led Senate’s endorsement of this defense clear a path for more of the manifestations — and consequences — of authoritarianism? The case of the Roman Republic’s rapid slippage into an autocratic regime masquerading as a republic shows how easily that transformation can occur.

Timothy Joseph is an associate professor of classics at College of the Holy Cross in Worcester, Mass. The was first published on The Conversation — “This is how ancient Rome’s republic died – a classicist sees troubling parallels at Trump’s impeachment trial.”