Home
Market
The Greta and Trump show – Davos highlights on Tuesday
Prev Article Next Article
This post was originally published on this sitehttps://i-invdn-com.akamaized.net/trkd-images/LYNXMPEG0K1PX_L.jpg 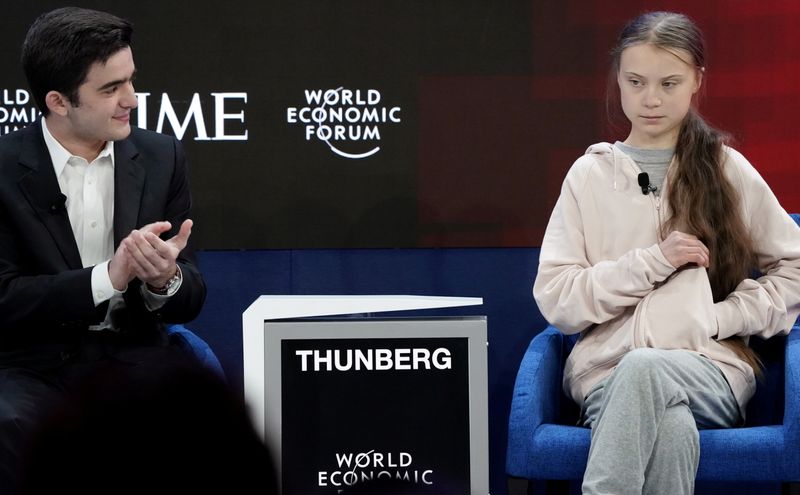 DAVOS, Switzerland (Reuters) – The annual meeting of the World Economic Forum (WEF) kicked off on Tuesday in the ski town of Davos.

Here are the highlights from Day 1:

THUNBERG V TRUMP: A TRILLION TREES IS NOT ENOUGH

Greta Thunberg and U.S. President Donald Trump dominated as they both attempted to frame arguments around climate change. Speaking thousand miles away from where his impeachment trial was due to start, Trump backed a tree planting initiative and dismissed the “perennial prophets of doom” on climate change.

Trump did not name Thunberg, but she was sitting in the audience and responded less than an hour later in a packed auditorium. “Our house is still on fire,” Thunberg said, repeating her warning at the WEF meeting a year ago.

“Your inaction is fuelling the flames,” the 17-year-old added, in the latest to-and-fro with the 73-year-old president.

Often seen as the preserve of rich, old men, this year’s Davos has been invigorated by fresh voices, energy and Doc Martens with many young activists following their role model Thunberg up the Alps.

The first panel of the four-day gathering made clear the shift, with a combined age of 64, much younger than the WEF’s 81-year-old founder Klaus Schwab.

Hong Kong’s leader Carrie Lam and “Team HK”, including its trade secretary, top officials from the stock exchange, airport authority, MTR Corp (HK:) and the head of Swire Group, are on a mission to reassure after a Moody’s downgrade this week.

Lam sought to convince global business and political leaders that the Asian financial hub is open for business.

APPLE CEO TO EAT WITH TRUMP

Apple (O:) chief executive Tim Cook will attend a breakfast meeting with Trump on Wednesday. On Tuesday evening Trump was to dine with several CEOs in a meeting organized with the help of Trump’s adviser and daughter, Ivanka Trump, a source familiar with the situation said.

Saudi finance minister Mohammed al-Jadaan told Reuters on the sidelines of Davos that the proceeds of last month’s listing of oil giant Saudi Aramco (SE:) would be pumped into the local economy over several years, including building up defense systems.

With nearly $30 billion coming from Aramco’s local share offering last month, new and existing local industries, including defense and technology, will get a boost, Jadaan said.

David Solomon, Goldman Sachs (NYSE:) chief executive: “If you bought a package of all the IPOs that came to market in 2019 I think you returned 34% and outperformed the broader market a little bit. But there were companies that did not perform well and did not meet the expectations that were set.”