Home
Stocks
The Margin: 5 must-see Grammy moments, from the Kobe Bryant and Nipsey Hussle tributes to Billie Eilish’s big wins
Prev Article Next Article
This post was originally published on this site 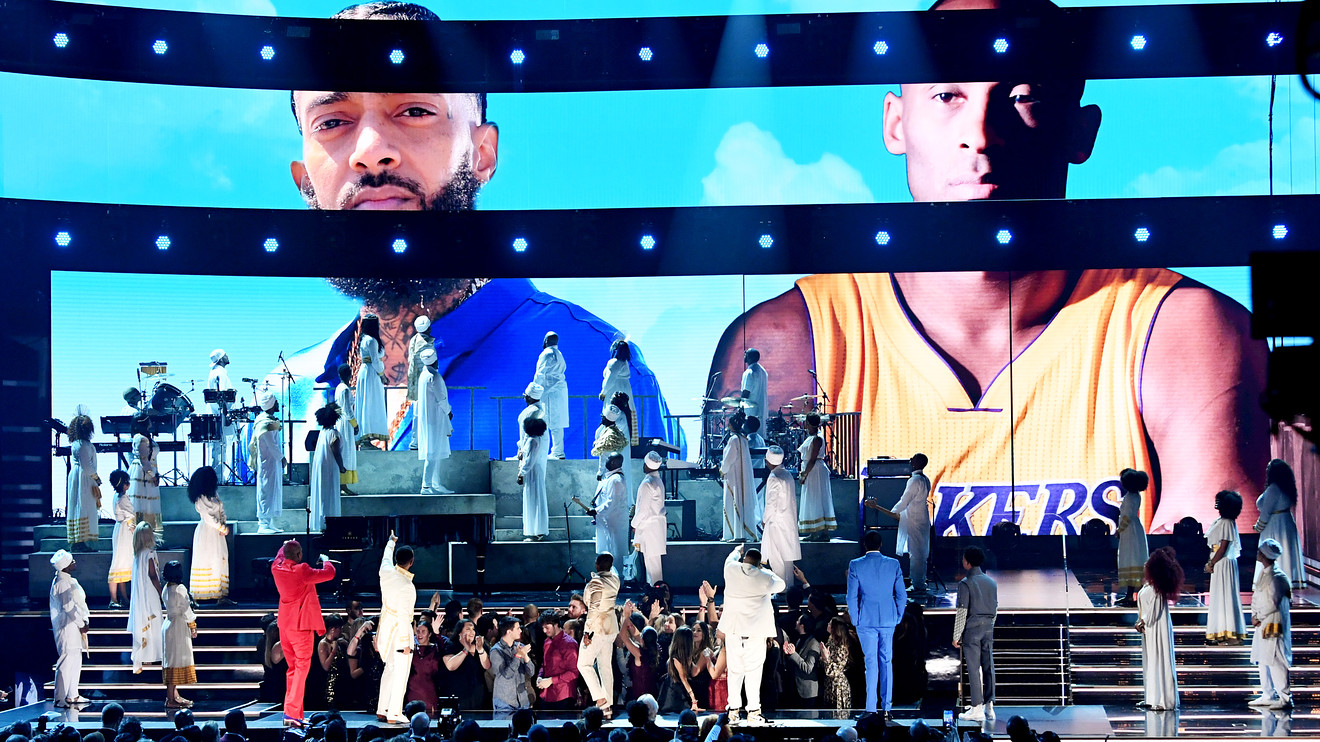 You could be forgiven for tuning out the Grammys on Sunday night, as the shocking death of Kobe Bryant, his daughter and several others in a helicopter crash earlier that day dominated the news cycle.

The 62nd annual Grammy Awards read the room at the Los Angeles Staples Center and took a somber tone, paying tribute to Bryant and late rapper Nispey Hussle, and keeping the politics at a minimum. But there were also powerful performances celebrating these men, as well as crowning new pop queens that raised spirits.

More from Alicia Keys’ tribute to Kobe Bryant at the top of the #GRAMMYs. pic.twitter.com/HZq5TkDVJj

Lizzo also dedicated the performance of her ballad “Cuz I Love You” and chart-topper “Truth Hurts” to Bryant, and the late NBA star’s jersey and image were featured throughout the night, including in the opening of Lil Nas X’s “Old Town Road” and Aerosmith and Run-D.M.C.’s “Walk This Way” performances.

2. Billie Eilish makes herstory: The party’s just begun for the 18-year-old “Bad Guy” singer, who snagged five awards, including Album, Record and Song of the Year, Pop Vocal Album, as well as Best New Artist. She’s the youngest artist to ever win Album of the Year, for her record “When We All Fall Asleep, Where Do We Go?”

3. Women supporting women: But while Eilish was accepting the Album of the Year win with her brother Finneas O’Connell, she said, “Can I just say that I think Ariana (Grande) deserves this…” before she censored while continuing, “‘Thank U, Next’ got me through some s—.” From the audience, Grande was shown blowing Eilish a kiss, waving her comments away and saying, “No, no.”

Honestly that was so sweet🥺💕 pic.twitter.com/ftPNi7ddVy

Viewers could also feel the love between Lizzo and Beyonce, who were both up for Best Pop Solo Performance. While the nominees were being read, the camera showed Lizzo with her eyes closed and her fingers crossed — but rather than wishing for her own win, she was mouthing “Beyonce” over and over again. Lizzo took the win.

Lmaoo @lizzo swishing for Beyoncé to win the award under her breath. A humble queen #GRAMMYs #GRAMMYAwards2020 pic.twitter.com/90RH31BkF3

4. Demi Lovato and Camila Cabello make everyone cry: Lovato has largely stayed out of the spotlight since being hospitalized for a drug overdose in 2018 and completing rehab. But she took the stage on Sunday night to perform “Anyone” — which she wrote and recorded just days before her overdose — and got so emotional that she had to stop and restart the song. The do-over was worth it, as she received a standing ovation at the end.

Demi Lovato, overcome with tears, had to start her #Grammys performance over https://t.co/898TvP9HKQ pic.twitter.com/SSZGblzOvj

And Cabello poured her heart into singing “First Man,” which is dedicated to her father. She struck a chord with viewers by stepping off the stage too finish the song right in front of him, before giving her proud and tearful pop a hug.

Camila Cabello sings “First Man” to her dad from the #GRAMMYs stage as he’s overcome by emotion pic.twitter.com/Xwwpo4tIrP

5. Remembering Nipsey Hussle: The late activist and rapper’s friends and collaborators, including DJ Khaled, John Legend, Meek Mill, Kirk Franklin, Roddy Ricch and YG performed a tribute to the “Higher” singer that was introduced by director Ava DuVernay. Hussle, who was 33 when he was shot and killed last year, was also posthumously awarded his first two Grammy Awards: Best Rap Performance and Rap/Sung Performance.

And then there were the snubs. Grammy darling Taylor Swift, who has won 10 of the Golden Gramophones, lost all three categories she was up for, including Song of the Year, Best Pop Album, and Best Pop Solo Performance.

Fans of Ariana Grande (nominated for five awards), Lana Del Rey (two nominations) and BTS (which wasn’t even nominated, despite their global chart-topping success) fumed on Twitter TWTR, -1.46%  that their favorite artists weren’t recognized. They managed to get the hashtag #scammys trending on Monday morning, with many threatening not to tune into the awards next year.

Recap of the Scammys for people who didn’t watch

-billie brought home pretty much everything

-bts got about 6 seconds of screen time

Ariana didn’t get any grammys when she literally owned the charts with this album? Umm ok, I see what you did there #scammys pic.twitter.com/EUw0tD2G3j

And Grande’s fans were reminded of how Mariah Carey was also invited to perform at the Grammys in 1996 with six nominations — and yet didn’t go home with a single trophy, either.