Home
Stocks
The Margin: More Americans are booking it to the library than going to the movies
Prev Article Next Article
This post was originally published on this site

Let’s all go to the … library.

More Americans hit the books versus the box office last year, according to a new Gallup poll, which found that people made roughly twice as many visits to their local library in 2019 as they did going to see a movie in the theater.

The nationwide survey of more than 1,000 adults conducted in early December 2019 found that the average U.S. adult made 10.5 trips to the library last year. Going to the movies was a distant second with 5.3 trips on average, and attending a live sporting event was third with 4.7 trips. Catching a live music or theatrical event (3.8 trips) and visiting a national or historical park (3.7 trips) rounded out the top five.

The least popular pastimes included going to the zoo, which averaged just under one visit on average last year, and visiting an amusement or theme park, which averaged 1.5 trips. 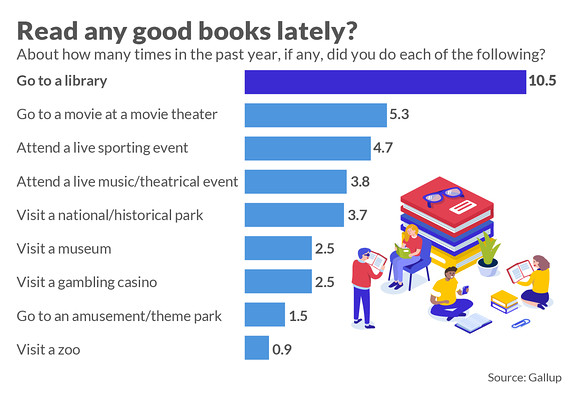 The study noted that young adults (ages 18 to 29), women and low-income families were most likely to frequent libraries. The library is stacked with free and low-cost resources, after all, including Wi-Fi. Besides borrowing books, music and other media (including e-books and digital entertainment), people can also use computers and printers to conduct research, do homework or apply for jobs. Many libraries also offer classes and training for adults and kids — including computer literacy, foreign language skills, yoga and meditation. These tax-funded community centers also provide tax forms and tax preparation services.

Related: Meet the Americans who wanted to be first in line to file their taxes

In comparison, the average U.S. movie ticket cost $9.16 last year, according to the National Association of Theatre Owners — but booking a reclining leather seat can run $20 or more apiece in places like NYC and LA, and this is all before factoring in snacks from the concessions stand for another $15 to $20. Before you know it, a night at the movies for a family of four has hit close to $100, if not more.

On the sports front, the average MLB ticket was $32.99 last year, Statista reports, although the Chicago Cubs, New York Yankees and Los Angeles Dodgers all commanded average ticket prices over $100. And this year’s Super Bowl tickets are approaching $9,000.

Those looking to take in a Broadway show ($123.87 on average during the 2018-19 season, per the Broadway League) or a catch their favorite singer or band on stage ($91.86 per ticket, on average, for one of the 100 most popular tours in North America) would also have to cough up a lot of cash to get some culture.

So the library is looking like a better and better deal for the Americans buckling under a collective $156 billion in personal loan debt, and $1.5 trillion in student loan debt.

Read more: What the new FICO credit score reveals about the precarious state of Americans’ finances

Related: Before you sign up for Disney+, use this calculator to add up the ‘true’ cost of your streaming services

Adults ages 30 to 49 were the most active overall in the Gallup report, and averaged the highest rates of participating in almost all of these past times. Gallup noted this is probably because people in their 30s and 40s are still relatively young, yet enjoying the midlife financial stability that allows them to splurge on experiences outside the house. Indeed, high-income households reported doing activities the most — for example, those earning more than $100,000 a year were more than twice as likely to go to a live sporting, musical or theatrical event than someone earning less than $40,000, on average.