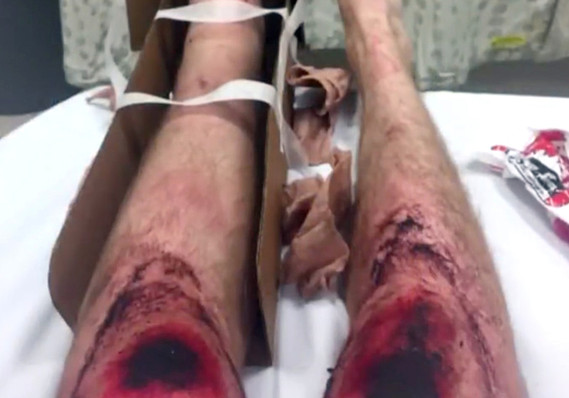 A trail runner crawled for almost 11 hours in freezing temperatures while wearing just shorts and a light shirt after breaking a leg in a remote national park in Washington.

Joseph Oldendorf told KIRO-TV that he had already run 12 miles through a snowy trail in Olympic National Forest when he slipped on ice and his tibia “completely snapped off.”

“I didn’t want my family to hear I died in the wilderness. I think it’d be unbearable,” Oldendorf said as he showed off gruesome wounds to his knees from his hospital bed in Seattle.

“I just figured this is my only chance — I’m going to crawl all the way there.”

Wearing only light running gear — despite below-freezing temperatures — Oldendorf crawled for almost seven hours before getting cellphone service — and then another four hours to finally reach rescuers.

“I had to crawl on all fours … after a while my knees were just raw,” he said of the “rocky, snowy, dirty, wet trail.”

They got so bad, he even tried putting his shoes on his knees as he crawled to “at least have some traction and a little bit of protection.”

“But they’re still really messed up,” he said.

At one point, he stopped to lie down, hoping help would soon be there. “But I was way too cold and there was no way I could do it without moving, so I just decided to keep moving towards them,” he told the station.

Jefferson Search and Rescue noted in a Facebook post that the runner had “little clothing and equipment” in “sub-freezing temperatures with occasional light precipitation.”

This report previously appeared at NYPost.com.

Read on: The secret to being a better runner may be hidden in your stomach