Home
Stocks
The New York Post: Trump suggested he’d like a front-row seat at impeachment trial, and Rand Paul says he has a ticket for him
Prev Article Next Article
This post was originally published on this site 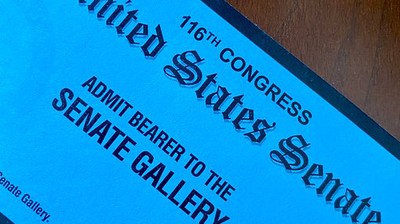 Detail from an image of a ticket to the Senate gallery posted on Sen. Rand Paul’s Twitter account.

WASHINGTON — Sen. Rand Paul is offering President Trump “a ticket” to attend his Senate impeachment trial after Trump mused to reporters about wanting a front row seat so he could stare into Democratic lawmakers’ “corrupt faces.”

“He’s welcome anytime. I’ve got a ticket for him,” the Kentucky Republican told the New York Post. “In fact, I’ll probably send a ticket over to the White House today for him.”

Senators control most tickets in the spectator gallery that rings the Senate chamber. During the first day of the trial Tuesday — which featured a marathon debate on rules and procedure during which Democratic amendments calling for the introduction of witnesses and documents, or to allow Chief Justice John Roberts to determine whether such evidence merited admission, fell in successive party-line votes — many of those gallery seats went unfilled.

Trump floated a visit to the Senate early Wednesday while speaking to reporters in Davos, Switzerland, before returning to Washington.

“I’d sort of love to sit in the front row and stare in their corrupt faces,” Trump said, adding that his legal team “might have a problem” with it.

Sen. Kevin Cramer, a North Dakota Republican, quipped that Trump’s attendance “certainly would make it harder to fall asleep.” Some senators reportedly struggled to stay awake Tuesday during a session that ran till 2 a.m.

“What faces? Corrupt faces? The president would be welcome to attend,” said a chuckling Sen. Steve Daines, a Republican from Montana.

“Ha, ha, ha. I would encourage him to conduct his other business rather than be distracted by this,” said Sen. John Cornyn of Texas, also a Republican.

Democrats, meanwhile, urged Trump to appear ready to testify about his intent in withholding the Ukraine military aid at a time he was also asking them to investigate Democrats including Joe Biden and his son Hunter. 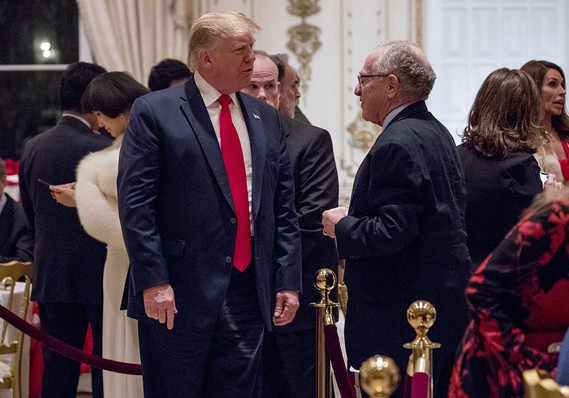 “If he comes, he should be prepared to answer questions,” said Maine Sen. Angus King, an independent who caucuses with the Democrats.

Sen. Patrick Leahy, a Democrat from Vermont, said: “President Trump also said he would like to testify under oath. That I would like to see.”

I heard @realDonaldTrump would like to attend the impeachment trial. Mr. President, would love to have you as my guest during this partisan charade. pic.twitter.com/GhTZ9Ez4U4

A version of this report previously appeared at NYPost.com.