Home
Stocks
The Number One: There’s only one stock millennials prefer over Amazon and Tesla
Prev Article Next Article
This post was originally published on this site

Apex Clearing recently unveiled its fourth-quarter Millennial 100 report, which analyzed more than 734,000 portfolios owned by U.S.-based investors with an average age of just over 31 years. Many of the names are probably exactly what you’d expect, along with perhaps a few surprises

“It’s been exciting to see how millennial’s investing habits have shifted over the past year,” Bill Capuzzi, CEO of Apex, said in a release accompanying the results. “From responding to key market moves, showing a keen interest in recent IPOs, and investing based on their values, millennials have proved to be a unique audience differing from their generational counterparts.” The millennial generation is usually classified as those born between 1981 and 1996.

Here’s the top 10, broken down by percentage of overall holdings: 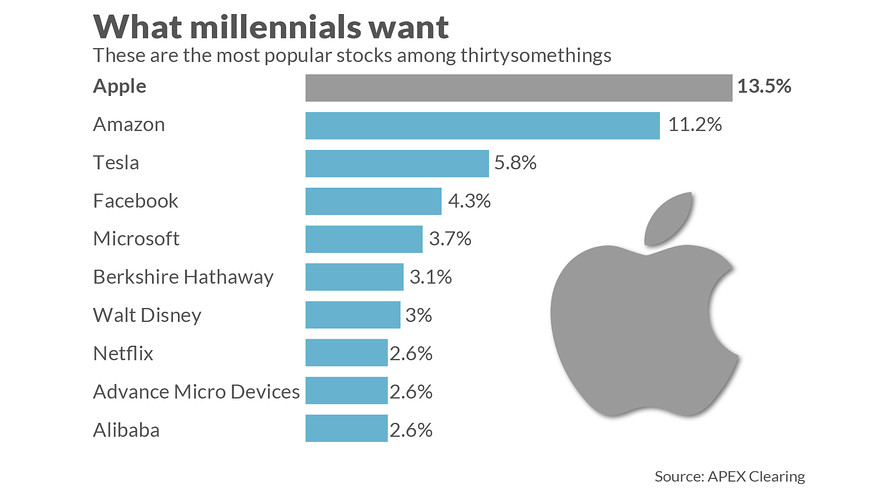 Apple reports its quarterly results after the close of regular trading Tuesday.

Interestingly, Warren Buffett, with his Berkshire Hathaway BRK.B, +0.80% sandwiched in between Microsoft MSFT, +1.96% and Disney DIS, +1.78% on the list, still holds plenty of sway among the younger generation.

Apex pointed out that 30 companies in the group of 100 debuted in the market within the last decade — a testament to millennials’ favoring hot, young, tech-focused investments. Square SQ, +4.77%  , for example, comes in at 21 for millennials but doesn’t crack the top 100 for the older cohort.

Millennials also have a big stake in the streaming wars, with the battle heating up between Amazon, Disney, Apple and Netflix. Also of note, Roku ROKU, +2.53% , which makes media-streaming players and licenses its technology to smart TV makers, takes the 26th spot on the millennial list.

”One thing is for certain — millennials are investing in the future,” Apex CMO Hannah Shaw Grove said. “Their fingers are always on the pulse of tech trends, innovation, and those companies which are in a position to influence the way we live and conduct business, and this quarter was no exception.”