Cusick downgraded the Luxembourg-based satellite services company to a rare underweight rating, after being at neutral the past three months, and at overweight for seven months before that. He removed his price target of $9, writing in a note to clients that “we see little to no fundamental equity value in shares” given Pai’s proposal.

Only 15% of companies covered by J.P. Morgan analysts are rated underweight, while 41% are rated neutral and 45% are rated overweight.

On Thursday, as Pai gave his speech, investors were whipsawed multiple times intraday, swinging between a decline of as much as 13.4% to a gain of as much as 61.2% before closing up 0.5%. The stock was halted for volatility no less than 10 times on Thursday. 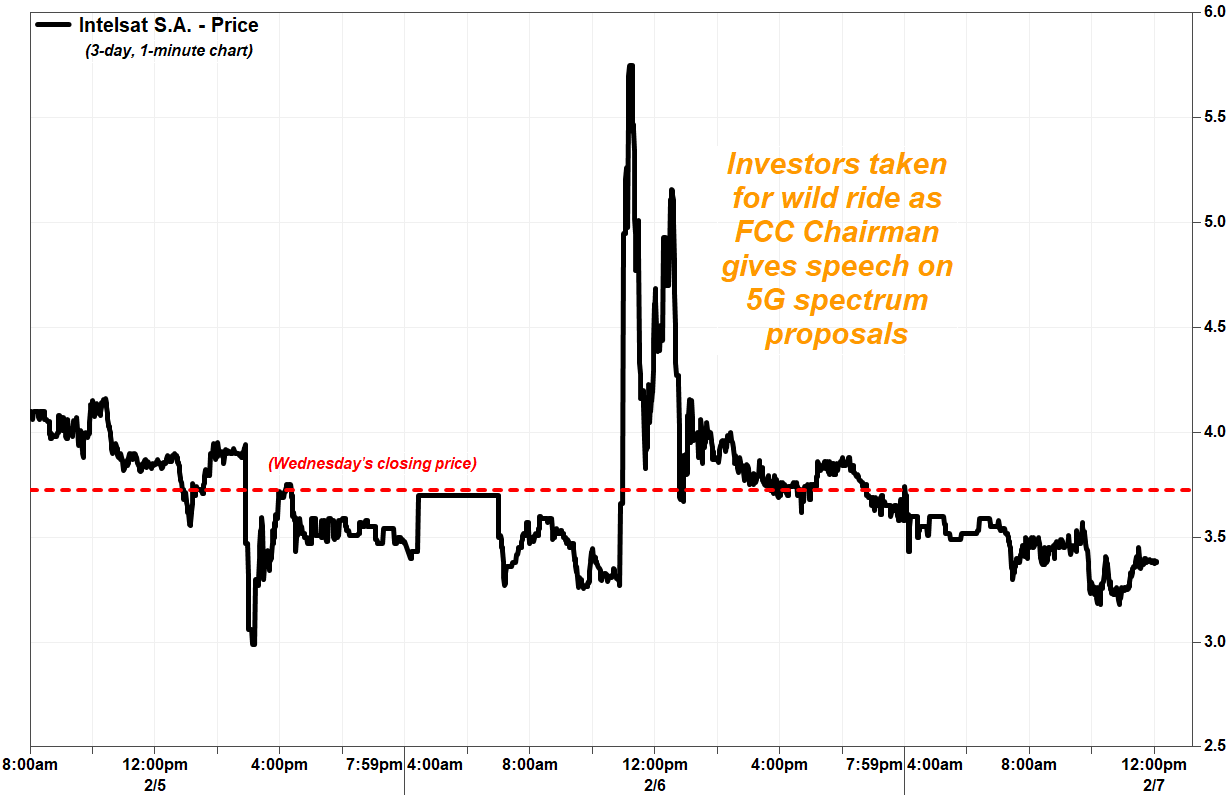 Pai acknowledged in his that “it will cost money” for satellite companies to relocate operations within the C-band, or spectrum in the 3.7-to-4.2 gigahertz band which will be used to deploy 5G networks. He said the FCC estimates the cost to range from $3 billion to $5 billion.

“So under my draft rules, the winning bidders in the C-band auction would be required to reimburse satellite operators for their reasonable relocation costs,” Pai said.

He followed by proposing to give satellite operators the opportunity to receive “accelerated relocation payments” of $9.7 billion, to be split by the operators, if they meet milestones for clearing spectrum quickly.

“This is well below our prior estimate of ~$12 billion, net of move costs, and coming over time rather than up front, rendering Intelsat’s equity worth little given its ~$14 billion debt load and 9.6X [debt] leverage, as well as its very challenged fundamental satellite business,” Cusick wrote in a note to clients.

Moody’s Investors Service said in October that given Intelsat’s leverage “around 10X,” it rated the company’s credit at Caa2, which is eight notches deep into “junk” territory.

In November, the stock lost about three quarters of its value after Pai decided to move forward with the public-auction option for new 5G spectrum, which would require that at least half of the auction’s revenue be reserved for taxpayers.

Cusick said it is possible that satellite companies negotiate for more money, but that’s not likely enough to change his opinion on equity value.

“Today’s comments by Chairman Pai are a significant development in this important proceeding. We look forward to reviewing the draft order, once issued, to place Chairman Pai’s comments in full context.”

Cusick said the fact that the CBA didn’t initially push back implies “some level of knowledge and consent,” and makes it likely that satellite operators will eventually accept the FCC proposal.

That said, not all analysts were so downbeat. Raymond James’s Ric Prentiss reiterated his outperform rating on Intelsat, but acknowledged that could change once details are known about how they payments are split between the satellite companies.