Home
Stocks
The Ratings Game: Starbucks’ U.S. declines are deeper than some analysts expected; others fear customers won’t spend the way they used to
Prev Article Next Article
This post was originally published on this site

A previous version of this article misstated the expectations for fiscal second quarter adjusted earnings per share. It has been corrected. 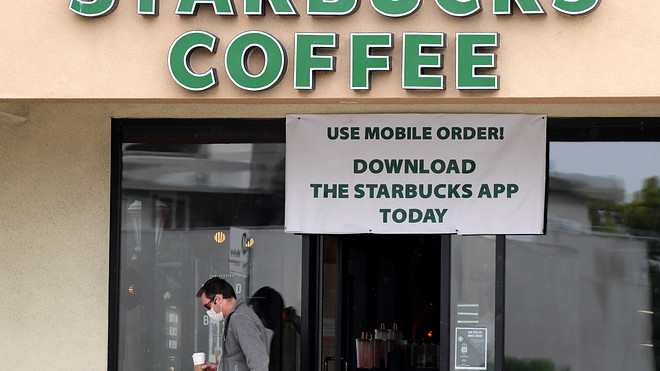 Starbucks Corp. says it expects the impact of COVID-19 on its business to be temporary, but some analysts are concerned about when, or if, consumer activity will return to pre-outbreak levels.

Starbucks SBUX, +3.22% said Wednesday that fiscal second-quarter same-store sales are expected to fall 3%, with the first 10 weeks of the quarter showing a “strong performance” but same-store sales sinking in the range of 60% to 70% in the last week of March.

Adjusted earnings per share for the quarter are expected to be 32 cents, down from 60 cents last year.

“We are leveraging our experience in China to inform our COVID-19 response strategy in the U.S.,” said Chief Executive Kevin Johnson in a letter to stakeholders published late Wednesday.

In China, Johnson said the company is on the road to recovery, with same-store sales down 42% for the last week of March, at the midpoint of a 90% decline in mid-February.

KeyBanc Capital Markets said the decline in the U.S. was sharper than analysts expected.

“Like McDonald’s, we believe Starbucks and other quick-service chains with heavy exposure to the morning daypart are underperforming comparable lunch/dinner-centric brands as daily routines and commuting patterns are upended,” analysts led by Eric Gonzalez wrote.

At the end of the quarter, 58% of Starbucks’ company-operated U.S. locations were drive-thru, of which 76% were open.

Watch:How to pick restaurant stocks that could survive the looming crisis

BTIG analysts maintained their neutral stock rating for Starbucks following the update, citing the lack of visibility on the pace of the U.S. recovery.

“While we believe the issues related to the coronavirus are transitory, we are not yet convinced that consumers will fully return to their prior purchasing habits when the lockdowns are lifted in the U.S.,” analysts led by Peter Saleh wrote.

BTIG expects “staggering” declines in April before same-store sales get back into positive territory in the fourth quarter. Analysts rate the stock neutral and said “China provides a road map to recovery.”

UBS analysts forecast a “gradual recovery” in China, with the benefit of reduced competition as Luckin Coffee Inc. LK, -18.40% manages the fallout from a recent investigation into financial misconduct.

“Brand strength and customer preference remain favorable, even as some perception scores lag Luckin,” UBS analysts led by Dennis Geiger wrote. “But with a focus on the U.S. as the primary driver for shares, we expect upside is limited given concerns that comps could be down significantly in the coming months.”

UBS rates Starbucks stock neutral with a $73 price target, down from $95.