Home
Stocks
The Tell: Stocks headed for a 67% downturn? Seems ‘preposterous’ now, but it did in 2000 and 2007, too, says fund manager
Prev Article Next Article
This post was originally published on this site

It’s hard out there for a bear.

Despite a few notable hiccups along the way, the bull market just continues to prove insanely resilient. The latest evidence of that was on full display during Tuesday’s torrid session as both the Dow Jones Industrial Average DJIA, +1.56% and S&P 500 SPX, +1.65% were staging fierce rallies.

Does that change John Hussman’s mind about what lies ahead? Nope. The man behind Hussman Strategic Advisors is nothing if not consistent, and recent market action only has him digging in his heels in a bearish stance.

“Current hypervalued extremes are likely to be followed by market losses on the order of two-thirds of value of the S&P 500,” he told clients in a note. “I recognize that the notion of a two-thirds market loss. seems preposterous. Then again, so did similar projections before the 2000-2002 and 2007-09 collapses.”

Not only that, Hussman used this chart to illustrate his view that a conventional passive investment mix will deliver a negative nominal return over the next 12 years, a remarkably dark outlook considering the market’s historic returns: 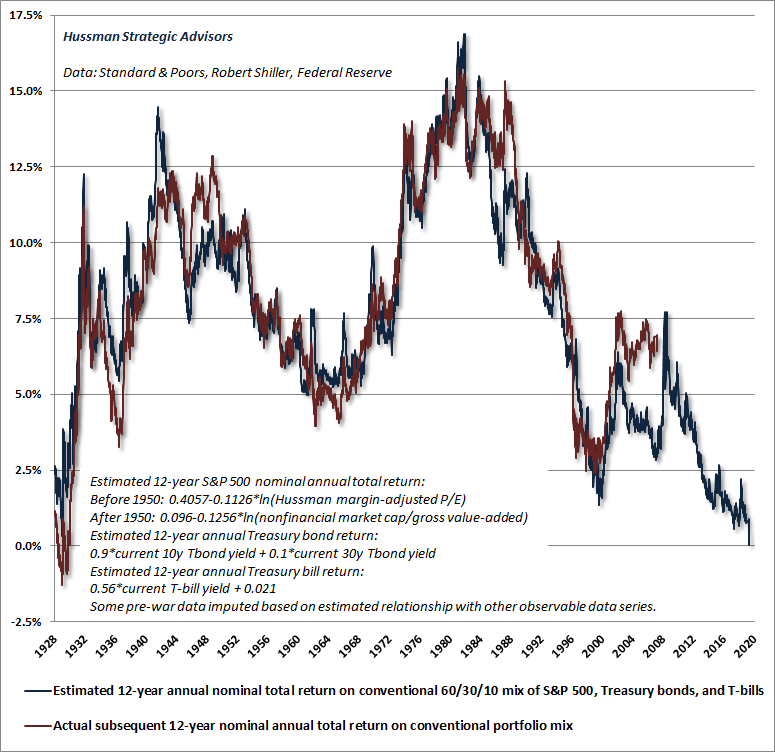 “Understand this: The more glorious this bubble becomes in hindsight, the more dismal future investment returns become in foresight,” he wrote. “Investment is not independent of price. Whatever they’re doing, it’s not ‘investment.’”

Hussman bases his gloomy outlook on the fact that valuations are out of whack — specifically, he pointed out, the S&P price/revenue ratio just reached the steepest extreme in stock market history.

“Having done so, investors now require market valuations to maintain a permanently high plateau at this level in order for continued growth in GDP, revenues, and dividends to collectively produce S&P 500 total returns of even 5.6% annually,” Hussman noted. “This is basic arithmetic.”

As for how he’s gotten it wrong for so long, he said he relied on market cycles across history, in which extremely “overvalued, overbought, overbullish” market conditions have typically signalled tops.

But he apparently didn’t account for the Federal Reserve’s easy-money policies, with benchmark interest rates at a 1.50-1.75% range and trillions of international government debt yielding 0%.

“In hindsight, amid the novelty of quantitative easing and zero-interest rate policy, our pre-emptive bearish response to those syndromes turned out to be detrimental,” Hussman said. “In late-2017, we abandoned the notion that it was still possible to define any ‘limit’ to speculation.”

Nevertheless, he said he believes “the combination of hypervaluation and negative market internals,” are luring investors toward a trap door.

“I’m incredibly hopeful that investors will understand and learn that central lesson — drawn from my error in the recent half-cycle,” Hussman wrote. “What concerns me is that many investors seem have drawn the ‘lesson’ that valuations don’t matter, that the Fed is omnipotent, and that stocks are always an ‘investment,’ regardless of the price.”