Home
Stocks
The Value Gap: ‘None of us are free until we’re all free’: Opal Lee, 94, has campaigned for years to make Juneteenth a national holiday
Prev Article Next Article
This post was originally published on this site 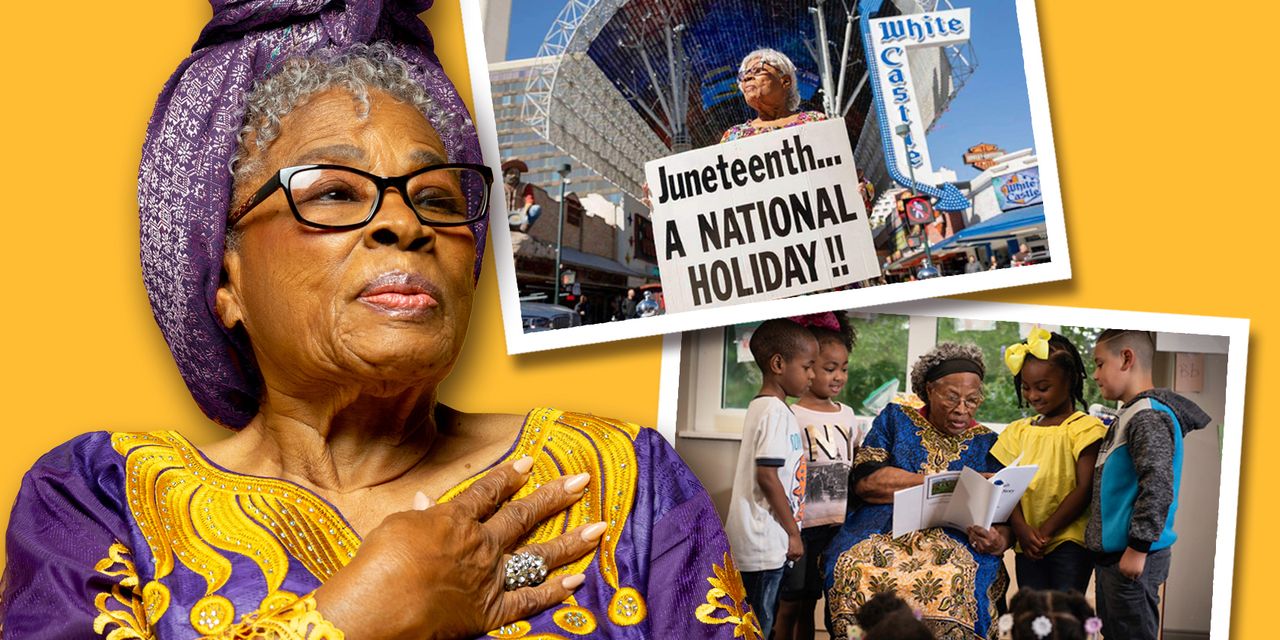 The Value Gap is a MarketWatch Q&A series with business leaders, academics, policymakers and activists on how to reduce racial and social inequalities.

Opal Lee, a 94-year-old activist and retired educator in Fort Worth, Texas, known as the “Grandmother of Juneteenth,” has walked through cities all over the country on her yearslong campaign to make Juneteenth a national holiday, including a 1,400-mile trek to the nation’s capital in 2016.

This week, her vision would finally become reality.

The Senate and House in back-to-back votes passed a bill that would designate Juneteenth, the June 19 commemoration of the last enslaved Black people in Texas learning they were free, as the country’s 12th federal holiday. President Biden is scheduled to sign the bill into law Thursday afternoon.

Lee, who spoke with MarketWatch before Congress passed the legislation, is “ecstatic” about the new momentum in Congress, her granddaughter Dione Sims said Wednesday.

“I want them to know that this is not just one little old lady in tennis shoes wanting it to be a national holiday — that there are people all over this country waiting, watching and hoping that Juneteenth is declared a national holiday,” Lee said in a Value Gap interview Sunday.

Union General Gordon Granger delivered the news to Galveston, Texas, on June 19, 1965 — two months after Confederate General Robert E. Lee had surrendered, and two and a half years after President Abraham Lincoln signed the Emancipation Proclamation.

See also: What is Juneteenth?

Lee, who grew up in Marshall, Texas, and then Fort Worth, has her own fond memories of celebrating Juneteenth as a kid. But on the night of June 19, 1939, when she was 12 years old and living in an all-white neighborhood, a white mob stormed the family home and burned it.

Lee would go on to have four children, work as an elementary school teacher, earn her master’s degree and serve as a school counselor. She dedicated herself to community activism after retiring in 1977, including working to address housing and food insecurity and helping establish the Tarrant County Black Historical and Genealogical Society.

In 2016, Lee embarked on a walk from Fort Worth to Washington, D.C., to raise awareness and support for making Juneteenth a national holiday. She traveled in stretches of two and a half miles to honor the additional time enslaved Texans waited for their freedom, and has continued her symbolic two-and-a-half-mile walks in Texas in recent years.

Lee’s Change.org petition to make Juneteenth a national holiday in 2021 had more than 1.6 million signatures as of Thursday.

Almost every U.S. state recognizes Juneteenth as a holiday or observance, and a handful have also designated it as a paid holiday for state employees. In the wake of last year’s resurgence of the Black Lives Matter movement, an increasing number of companies — among them Twitter
TWTR,
,
Nike
NKE,

— have also made Juneteenth a paid holiday.

Here’s more from Lee on the meaning of Juneteenth, her quest to get it recognized, and why the holiday is a “unifier”:

MarketWatch: A lot of people learned about Juneteenth in recent years, but you’ve obviously had a more intimate understanding of it for decades. Can you share some of your earliest memories of celebrating Juneteenth, and what it means to you personally?

Lee: I was born in Marshall, Texas. And each year on the 19th of June, we’d go to the fairgrounds, where there would be music and games and food, and food and more music and games, and all kinds of things. When my parents moved to Fort Worth, people might’ve had Juneteenth and celebrated in their backyard or something like that.

“
‘I don’t want people to think that Juneteenth is just a festival, because there’s so much more to it than that.’
”

But my mentor — her name was Lenora Rolla — started the Tarrant County Black Historical and Genealogical Society. And we put on the Juneteenth celebration. We had one in a tiny little park called Sycamore Park. Three days, 30,000 people, 10,000 people a day. And I’ve not been able to get that crowd since. I keep trying, but I’ve not been able to get that many people together again. It was wonderful.

And I don’t want people to think that Juneteenth is just a festival, because there’s so much more to it than that. There’s music, and usually young people of different cultures, ethnic groups, get together and learn songs, and then they give a concert.

I want them to understand that there is an Empowering You [event] to our festival. And that portion of it, there’s food given, people are shown how to buy a house, how to get their credit together, their health. … There are so many things that empower people.

MarketWatch: Could you tell me how long you’ve been on this journey to get Juneteenth recognized as a national holiday? How did that start and what’s your ultimate goal?

Lee: I’ve been a part of Juneteenth, belong to the National Juneteenth Observance Foundation that was started by Dr. Ronald Myers. But it was in 2016 that I decided I hadn’t contributed enough.

And so I asked my pastor of my church, Baker Chapel African Methodist Episcopal Church, and the church musicians, and a county commissioner, school board members, several others, to join me when I decided that I was going to walk from Fort Worth, Texas, 1,400 miles to Washington, D.C. And so they gave me a lovely sendoff, and I walked two and a half miles that afternoon. The next day, I picked up where I left off. I did two and a half more miles.

I walked through Fort Worth, Arlington, Grand Prairie, Dallas, Balch Springs, Joppa, when my team says that wasn’t the way it was going to be done. You see, somebody had promised us an RV so I’d have a place to rest, and they changed their mind. They decided what I was doing was too political. And so my team said, “You’ll just go where you are invited and where they have Juneteenth activities.”

Needless to say, I was invited all over these United States. I went to Shreveport and Texarkana and Little Rock and Fort Smith and Denver, Colo., and Colorado Springs. I went to Madison, Wis. and I went to Milwaukee, Wis. Chicago. I went to Atlanta and Birmingham, Ala., and Virginia. I was all over the place.

And so if I left Fort Worth Sept. 2016, I actually got to Washington January 2017. We had asked President Obama to walk with us from the Frederick Douglass house to the Capitol, but he was in Chicago. That didn’t happen; I didn’t get what I wanted. But I’m going to keep on walking and keep on talking till Juneteenth is a national holiday.

MarketWatch: That’s pretty amazing. I can’t walk that far; I know that.

MarketWatch: George Floyd’s murder seems to have been one of the turning points in the movement to get Juneteenth recognized. Have there been other turning points during this campaign that have made people think differently about Juneteenth, like during the civil-rights movement or after Rodney King was beaten?

Lee: I really do think that having those terrible things happen, that there’s more attention being given to Juneteenth. I’m so sorry about those things. Black Lives Matter has also triggered people listening and talking and doing something about Juneteenth. Do you know that there are 48 states that now have some kind of Juneteenth observance? Of course, Texas was first.

“
‘I don’t want people to think it’s a Black thing or a Texas thing. None of us are free until we’re all free. And we aren’t free yet.’
”

And I don’t want people to think it’s a Black thing or a Texas thing. None of us are free until we’re all free. And we aren’t free yet. There are too many disparities that we need to be about the business of working on together.

Joblessness — look at all the things that need to be done. Why is it that people are without jobs? And then some of us, for jobs, we get paid one thing and somebody else gets paid more for the same job. That’s not fair. That’s got to be eradicated.

Our healthcare system — I may be able to get what’s needed when I go to a hospital, but other people can’t afford it. It’s just mind-boggling, the kinds of things we need to put our attention to.

And I’m adamant about climate change. Our scientists have told us that we’re destroying our planet, and we can do so much better than what we are doing.

Those things need to be addressed. We don’t have to have divisiveness when we could work together to dispel these things.

MarketWatch: How are you going to be spending Juneteenth this year?

Last year, because we couldn’t do a [parade] … I walked two and a half miles from the [Fort Worth] Convention Center to the Will Rogers Complex. I thought I’d have 10, 15 cars follow me. There were 300 cars that followed — which means people are listening. They want to share.

MarketWatch: As both a former educator and somebody who wants to see Juneteenth talked about more in schools, what do you think of current legislation that is trying to prevent certain messages about race from being taught in schools?

Lee: I’m hoping that somewhere along the line that those bills will not pass. That we’re going to have the harmony that we need. And so I’m hopeful that Juneteenth will be taught in the schools.

MarketWatch: You’ve called Juneteenth a unifier, something that can bring the country together. Can you talk about why that is?

Lee: I just see people who have been taught to hate can be taught to love. And I think Juneteenth is that instrument that can teach us that we can love one another.

In fact, I advocate that each one of us become a committee of one. Because you know somebody who’s not on the same page with you — so make it your business to change his mind. It won’t be easy, it’s not going to happen overnight. But you can get people to understand that we need each other. To exist, we’re going to need each other.

So I see Juneteenth as being that unifier — that way that we can embrace freedom.

(This interview has been edited for space and clarity.)