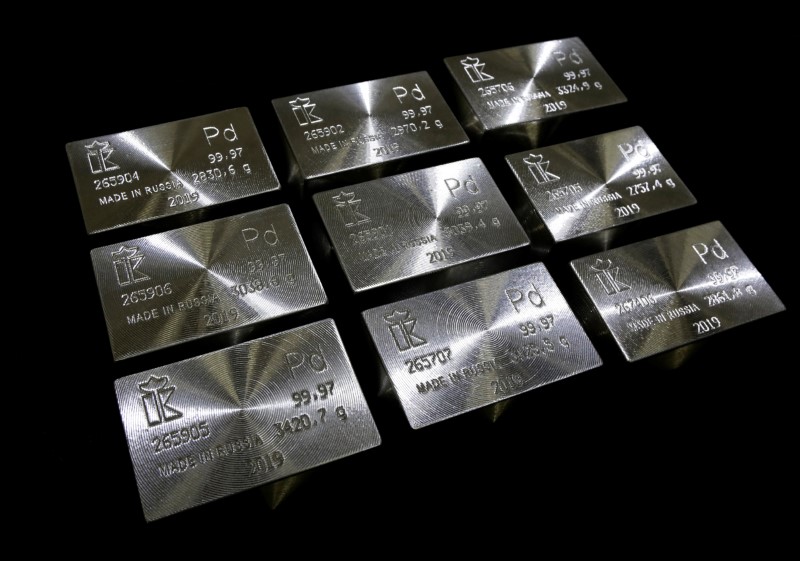 A long-term supply deficit has led prices of the metal, used mainly in engine exhausts to curb harmful emissions, to double over the last year.

Consumers’ immediate needs are often met in the lending market, in which holders of metal put their stocks to work for a profit. However, rates charged to lease palladium have spiked in recent weeks, suggesting availability is tight.

In the futures market, prices of metal for near-term delivery have also moved sharply above those for later-dated contracts – a situation known as backwardation, which also indicates buyers fear a lack of ready supply.

“There’s no metal,” said a trader in London. “Consumers are stockpiling. It’s all been shipped to China.”

The roughly 10-million-ounce a year market has been in deficit for most of the last decade. Standard Chartered (LON:) analyst Suki Cooper said she expects 700,000 ounce shortfalls this year and in 2021, and for prices to rise.

In the last two weeks the market flared into deeper backwardation.

Forward and lease rates have also leaped to around 20%, the highest in a year, from around 3% at the start of January.

South Africa, which produces two-fifths of the world’s mined palladium, released data on Thursday showing its output of platinum group metals including palladium fell 13.5% in November compared to the same month in 2018.

Also helping boost prices, China and the United States signed a trade deal on Wednesday that could spur economic growth, and a Chinese auto industry group said vehicle sales would slow their decline.

Years of deficits have pushed down visible palladium stockpiles, with holdings in exchange traded funds (ETFs) at just over 600,000 ounces, down from 2.5 million ounces in mid-2015, removing a potential supply source.

Even as prices have surged, speculative investors have remained on the sidelines, limiting their power to disrupt the rally by cashing out of their bets.

Potential threats to high prices are if carmakers begin to replace palladium with platinum, which at around $1,000 an ounce now looks cheap, or miners bring forward new production.

“To me it looks like a bubble,” said Fritsch, predicting prices would return to around $1,500 by the end of the year.

However, plenty are still betting on further gains, at least in the next year or two.

“Palladium is just going to go up and up and up,” said Frederic Panizzutti at Swiss dealers MKS.