Home
Stocks
This is how far and fast the coronavirus has spread through U.S. stocks
Prev Article Next Article
This post was originally published on this site

Fears of a potential coronavirus pandemic has weighed heavily on shares of companies in a wide variety of sectors this week, particularly those with revenue exposure to travel into and out of China.

With the death toll reaching 6, and with more than 300 having been infected by the virus, the Chinese government confirmed over the long weekend that the virus can be spread by humans. That sparked fears of a pandemic similar to that of SARS (severe acute respiratory syndrome), another coronavirus that spread from China to more than a dozen countries in 2003 and killed about 800 people.

As airports in several countries increased biosecurity screenings of passengers from China, travel-related stocks were hit hard, especially considering how travel could be curtailed during the upcoming Lunar New Year travel season.

“Market participants fear possible contagion, as hundreds of millions of Chinese are expected to travel this Lunar New Year, which begins Friday, and as the virus has been detected in three countries outside of China,” wrote Charles Campbell, trading desk specialist at MKM Partners, in a note to clients.

The broader stock market’s losses accelerated slightly after the Centers for Disease Control and Prevention confirmed Tuesday that one individual in the U.S. was diagnosed with coronavirus, after arriving back in the U.S. following a visit to Wuhan, China.

The U.S.-listed shares of Shanghai-based Trip.com Group Ltd. TCOM, -8.39%  tumbled 9.3%. Trip.com’s stock were among the biggest decliners in the Invesco Golden Dragon China exchange-traded fund PGJ, -2.86%  , which tracks China-based companies that derive most of their revenue from China, and dropped 2.9%.

“The key risk to the sector is constraints on travel and movement from/to and within the Asian region and, in particular, with regard to the Chinese consumer,” J.P. Morgan analyst Melanie Anne Flouguet wrote in a research note.

Royal Caribbean generated nearly 9% of its total revenue over the last 12 months from China, according to estimates based on FactSet’s proprietary algorithm, while Carnival’s China exposure was less than 3% and Norwegian’s was a little more than 2%.

If there is a bright side for Wynn and Las Vegas Sands, Instinet analyst Harry Curtis wrote that thus far, “health officials have implemented travel precautions without inciting panic.” And if there is no pandemic, that could be a positive catalyst for the stocks.

But companies that may be hurt by the coronavirus weren’t restricted to travel, as the Dow’s biggest decliner was aerospace giant Boeing Co.’s stock BA, -3.55%  , which tumbled 5.5% before being halted for news, and the second biggest loser was energy giant Chevron Corp.’s shares CVX, -1.82%  , which were clipped for a 1.7% loss.

Boeing’s revenue exposure to China was a little more than 13%, according to FactSet, and Chevron’s was about 27%.

Also weighing on Boeing’s stock, the company said it estimated that its 737 MAX will be “ungrounded” during mid-2020.

Meanwhile, shares of 3M Co. MMM, -0.94%  fell 1.0%, as the consumer and industrial products company derived nearly 11% of its revenue from China, but may also benefit as the company makes respirator and surgical masks.

The combined exposure to China of the Dow’s components is 7.8%, according to FactSet. That makes China the top revenue generator of countries outside of U.S., well above Japan at 3.1%. 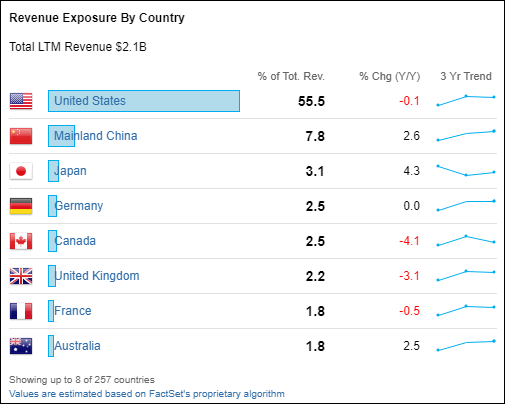 Some stocks actually rose on coronavirus fears, like those of NanoViricides Inc. NNVC, +213.99%  , which makes nano-medicines for viral diseases, Novavax Inc. NVAX, +67.94%  , which is developing vaccines for flu and other infections diseases, and Aethlon Medical Inc. AEMD, +16.35%  , which makes a hemopurifier. Shares of NanoViricides rose nearly four-fold (up 278%), Novavax shot up 63% and Aethlon ran up 21%.

NanoViricides’s stock had been halted for volatility no less than 13 times on Tuesday.

Jaimy Lee and Emily Bary contributed to this article.