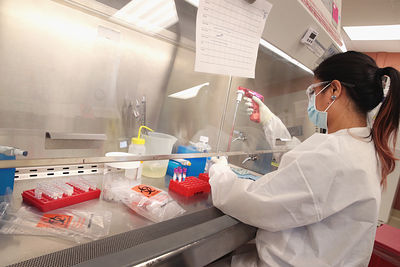 An estimated 94% of new vaccine trials end in failure, according to one study.

If a vaccine for coronavirus is developed there is no guarantee that every American will be able to afford it, Health and Human Services Secretary Alex Azar told lawmakers earlier this week. However, other health experts say that won’t be the case if the government pays for the development of a vaccine.

“We would want to ensure that we work to make it affordable, but we can’t control that price because we need the private sector to invest,” Azar said before the House Energy and Commerce Committee on Wednesday. “The priority is to get vaccines and therapeutics and price controls won’t get us there.”

Unlike European Union countries, the U.S. government does not have the ability to dictate what private manufacturers can charge for a new vaccine. Until third-party competition from another company is established, a private company can demand high prices for a new vaccine.

That said, it can cost $1 billion to fund the research and development of a new vaccine, according to a 2018 study published in Lancet, a peer-reviewed medical journal. On top of which, after months of testing, there is a 94% chance of failure, according to the authors of the study. Because of this, vaccine manufacturers often accept federal funding which allows the government to have a say in terms of pricing it.

So far, the government has pledged $1 billion for coronavirus vaccine research, Azar said.

Dr. Tom Coburn, a former Republican U.S. senator from Oklahoma who is also a physician, said he is “not at all worried” that a coronavirus vaccine won’t be affordable for Americans.

“It should be really cheap,” he said, to manufacture a vaccine once testing is complete. Coburn, an affordable drug pricing advocate, formerly served as a fellow at the Manhattan Institute, a New York-based conservative economic policy think-tank.

However, there are concerns that private pharmaceutical companies that don’t receive federal funding will uncover a vaccine before a government organization such as the National Institutes of Health. Dr. Tony Fauci, director of the National Institute of Allergy and Infectious Diseases at the NIH, said that it would take a minimum of six to eight months to bring a vaccine to market.

Coburn acknowledged that if drug companies create a vaccine without federal money, the cost to consumers would be “out of the government’s hands,” because that the government wouldn’t be able to directly set the prices. But he said he doesn’t think private companies will take advantage of the potential opportunity to charge monopoly prices. “The people I know that make vaccines are patriots,” Coburn, who previously served on a Senate health committee, said.

Others are more skeptical. Dr. Peter Bach, director at the Center for Health Policy and Outcomes at the Memorial Sloan Kettering Cancer Center, does not believe the private sector will have an incentive to make a vaccine affordable.

“If we depend on the private market to develop a vaccine they will demand a very high return for success,” given the high cost of developing and testing a vaccine, he said. “We routinely accede to this basic formulation that there need to be big rewards for undertaking these risks with private capital.”

In light of that, vaccination discovery efforts “should be taken on by the public using public funds, the same way we invest in other areas of public health like sanitation,” Bach said.

Robert Weissman, president of Public Citizen, a left-leaning consumer rights advocacy group based in Washington, D.C. shared similar concerns. “If there is a vaccine discovered and exclusive license and transfer rights are granted [to a private company],” he said, it could establish a “monopoly with no reasonable pricing condition.”

“The manufacturer will charge what they can which won’t be affordable,” Weissman said.

Azar’s comments elicited criticism from Democratic lawmakers including House Speaker Nancy Pelosi, who referenced Azar’s previous position as a lobbyist for the pharmaceutical company, Eli Lilly LLY, -2.37%. The company did not respond to a request for comment.

“I guess yesterday when the Secretary made that ill-advised statement, he was wearing his pharma hat which he wore before he came here,” Pelosi said on Thursday.

On Thursday, Azar reassured lawmakers on the House Ways and Means Committee that if the government were to partner with the private sector they would co-fund the research. Doing so he said would “ensure there’s affordable access to the fruits of that, whether vaccine or therapeutics.”

In the U.S. there were 62 cases of coronavirus, including the first possible case of a transmission of the virus in the community, as of Friday. Worldwide, there are as many as 83,861 cases and 2,867 deaths.