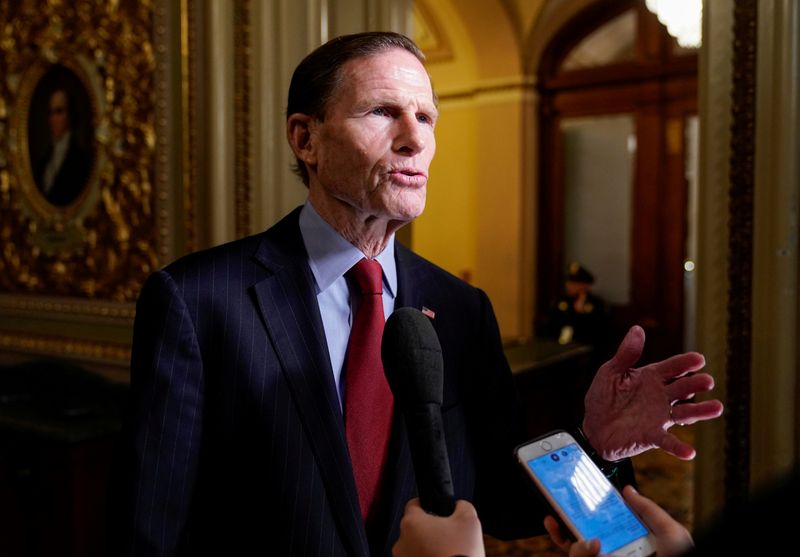 © Reuters. FILE PHOTO: Senator Blumenthal speaks to reporters during a break as the Trump impeachment trial continues in Washington.

The bill would create an independent aircraft certification commission, bar Boeing Co and other manufacturers from tying employee compensation to delivery of airplanes and increase oversight of manufacturers that handle delegated certification tasks on behalf of the Federal Aviation Administration (FAA).

Boeing’s best-selling jet has been grounded since March 2019 and the FAA has been criticized by some for its role in approving the jet’s new safety system in the wake of both fatal crashes.

The FAA did not immediately comment. Boeing said on Tuesday that “as members of Congress work on legislation, we are committed to working with them and the FAA to promote aviation safety.”

The legislation would also give the FAA administrator power to deem airplanes not sellable in certain countries until airlines met training, operating and maintenance requirements. It would require the FAA to assess a country complies with international safety standards before being sold U.S. manufactured aircraft.

The legislation would incentivise potential whistleblowers to report companies attempting to hide serious defects. Whistleblowers could receive up to 30% of monetary sanctions for information leading to a successful resolution.

The bill is backed by major aviation unions including the Air Line Pilots Association, the Association of Flight Attendants and Transport Workers Union of America.

The legislation would also reverse some provisions of a 2018 law limiting when the FAA could maintain oversight of airplane functions or requiring broader delegation.

“Returning power to federal regulators is a necessary first step to restore accountability,” said Senator Richard Blumenthal, one of the three sponsors. “Left to its own devices, the aviation industry has put corporate profits before consumer safety.”

He added: “The system in place is broken and we must make it right before more lives are lost.”

Republicans in Congress have generally said they want to wait for the outcome of investigations before calling for certain reforms.

Several reviews of the MAX certification have called for specific reforms, including improved staffing and experience for Boeing employees handling certification tasks.

The Justice Department has an ongoing criminal investigation of the crashes and the Transportation Department’s Office of Inspector General is reviewing the FAA’s MAX certification.