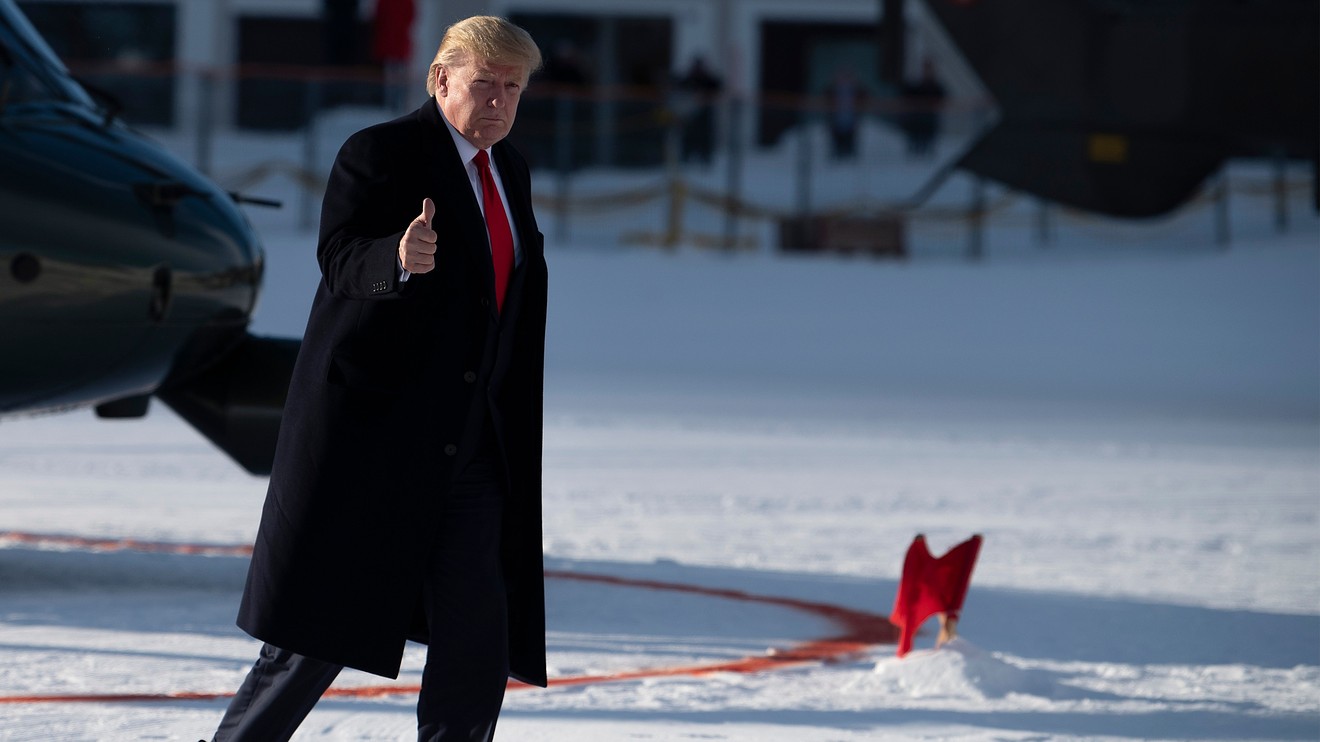 Delegates should “reject the perennial prophets of doom and their predictions of apocalypse,” President Donald Trump said Tuesday in widely reported remarks on the U.S. economy to the World Economic Forum in Davos, a swipe at environmental policy makers and activists.

Those activists include the Swedish teenager Greta Thunberg, who was also a headliner at the high-profile annual event that has made climate change chief among its topics this year.

The biggest long-term risk cited in the WEF report to kick off the summit was the possibility of extreme weather events. Other worries in the survey of more than 750 key decision makers included the failure to properly plan for climate change, man-made environmental disasters such as oil spills, major biodiversity loss and natural disasters, including earthquakes or tsunamis.

The phrase “Act on Climate” was written in the snow at the landing zone where Trump’s Marine One helicopter set down in the Swiss resort town.

Don’t miss: Hot shots can fly into Davos with sustainable fuel, but here’s why it’s so infrequently used

“America is thriving. America is flourishing and, yes, America is winning again like never before,” Trump said in remarks in Davos before talking about a newly signed “Phase 1” trade deal with China and a pending trade agreement with Mexico and Canada. He also spoke of record-low unemployment, stock-market gains DJIA, -0.19% SPX, -0.13% and millions of people removed from the welfare rolls.

Late last year, the Trump administration began pulling the U.S. out of the landmark Paris climate agreement of 2015, which has nearly 200 nations as signatories. Under the deal, each country sets voluntary goals to curb emissions of heat-trapping gasses that scientists say lead to climate change. Trump has called the Paris accord an unfair economic burden to the U.S. economy, in particular as the U.S. nears energy independence. He has been critical of adherence by China, India, Brazil and other nations to the pact and its earlier versions.

Trump’s speech was received in virtual silence from the audience apart from a brief flurry of applause when Trump said the U.S. would join a World Economic Forum initiative to plant 1 trillion trees worldwide, the Associated Press reported.

Nobel prize–winning economist Joseph Stiglitz criticized Trump’s speech for failing to address the climate emergency beyond a commitment that the U.S. would join the tree-planting initiative. “He managed to say absolutely zero on climate change,” Stiglitz said, according to the Associated Press. “Meanwhile, we’re going to roast.”

The decade that just ended was by far the hottest ever measured on Earth, capped off by the second-warmest year on record, two U.S. agencies reported earlier this month. And scientists said they see no end to the way man-made climate change keeps shattering records.

Thunberg, meanwhile, told Davos attendees that her warning last year that “our house is on fire” had achieved nothing, as global emissions of carbon dioxide continue to rise.