Home
Market
Trump Rides Poll Bump to State of Union Before Impeachment Vote
Prev Article Next Article
This post was originally published on this sitehttps://i-invdn-com.akamaized.net/content/picffb36d9962b0929e51339af5ce6532a8.jpg 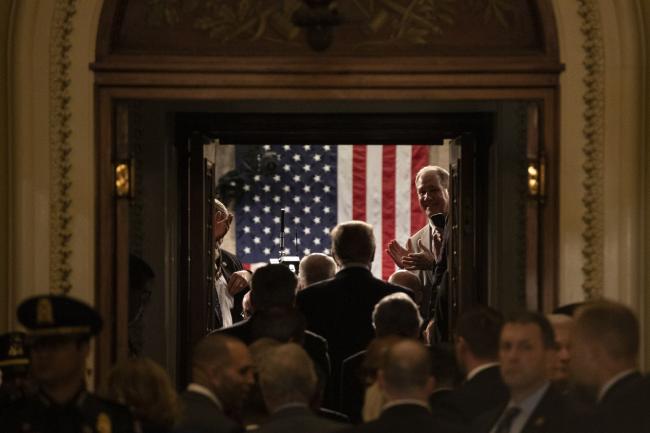 (Bloomberg) — President Donald Trump will try to move past his impeachment and make a case for his re-election in Tuesday’s State of the Union address by taking credit for a strong economy, newly signed trade deals and an immigration crackdown.

Trump said he plans to deliver a “positive” speech — boasting of his achievements in front of an audience that will include as many as five of his potential 2020 opponents. Some of Trump’s GOP allies urged him not to use his prime-time address to air grievances with Democrats over an impeachment that originated with a near party-line vote in the House and likely will end Wednesday with an acquittal in the Republican-controlled Senate.

“Why should he talk about impeachment when we have the hottest economy in history?” said Senator Mike Braun, an Indiana Republican.

One theme of Trump’s speech will be “the great American comeback” under his presidency, Marc Short, Vice President Mike Pence’s chief of staff, told reporters at the White House on Tuesday. Deputy Press Secretary Hogan Gidley told reporters in the early afternoon that the word “impeachment” didn’t appear in a draft of the speech he had read.

It is the second straight year Trump will deliver the annual address to the nation while beset by a major political crisis. The president was forced to postpone last year’s speech due to a record-long government shutdown that stemmed from a fierce battle with congressional Democrats over his demand for money to build a wall along the U.S. border with Mexico.

This year’s speech comes a day after the Iowa caucuses, the first contest in the race for the Democratic nomination for president. The initial results of the caucus, which was plagued by technical problems, are due out just hours before the speech. Trump has sought to elbow Democrats out of the limelight by holding rallies in the region and sending surrogates to campaign in the state.

The president plans to address the economy and trade deals with China, Canada and Mexico, a senior administration official said in a briefing for reporters, which would echo key themes from campaign rallies. He’ll also discuss his efforts to crack down on illegal immigration and lower prescription drug prices. The official asked not to be identified as a condition for participation in the briefing.

Trump was greeted with good news the morning of the speech when the Gallup poll announced that his approval rating had reached 49%, his highest ever in the survey. He has chalked up a series of accomplishments in the last month, including the killing of a top Iranian general the U.S. government considered a terrorist, the signing of a “phase one” trade deal with China and congressional approval of his revision of the North American Free Trade Agreement.

The White House published a list of official guests for the speech that include a black family from Philadelphia that has sought to move their daughter out of a “low-performing” public school and two black men who have benefited from the “Opportunity Zone” program created by Trump’s 2017 tax overhaul. A former Venezuelan police chief will also attend as Trump’s guest, as a symbol of his effort to depose the government of the country’s embattled president, Nicolas Maduro.

The guests also include the family of a soldier killed in Iraq by a roadside bomb the White House says was supplied by the Iranian general, Qassem Soleimani. Two other guests — the brother of a man killed by an undocumented immigrant and the deputy chief of the Border Patrol, Raul Ortiz — will serve to reinforce Trump’s continuing immigration crackdown.

A family with a daughter who was born at less than 22 weeks gestation suggests Trump will again call for abortion to be banned after the 20th week of pregnancy, continuing his recent appeals to evangelical Christian supporters.

Trump has sought to motivate his supporters and raise money by railing against Democrats over impeachment. But the administration official didn’t say whether Trump plans to bring it up in the speech.

“There’s plenty to talk about and it’s an opportunity to move on,” said Senator Roy Blunt, a Missouri Republican. “But the other option is to address it head-on and he often is a head-on kind of guy.”

Trump must also decide whether to invite Democrats to work with him to pass legislation in the coming months. The president on Sunday said impeachment makes it difficult to work with the Democratic leaders, House Speaker Nancy Pelosi and Senate Minority Leader Chuck Schumer.

“I’d like to, but it’s pretty hard when you think about it because it’s been such — I use the word ‘witch hunt,’ I use the word ‘hoax,’” Trump said in an interview with Fox News host Sean Hannity.

The address is expected to be relatively light on new policy announcements, a tacit acknowledgment of how difficult bipartisan cooperation will be in an election year.

White House officials have been drafting the speech for weeks, though the official said the president has the final say and that last minute changes could be made.

White House senior adviser Stephen Miller and Joe Grogan, director of the Domestic Policy Council, both traveled with the president to his Mar-a-Lago resort in Palm Beach, Florida, last weekend to work on the speech, according to a person familiar with the matter. The person asked not to be identified discussing Trump’s preparations for the speech.

Trump’s acquittal in the impeachment trial became all but guaranteed on Friday after senators voted against having witnesses to testify about the president’s alleged effort to pressure Ukraine to investigate former Vice President Joe Biden, a top contender for the 2020 Democratic presidential nomination, and his son Hunter, over their dealings in the Eastern European country.

The outcome has left members of both parties even more divided, with Democrats accusing Republican senators of conducting an unfair trial by blocking witnesses and documents. Several Republicans have said while they don’t condone Trump’s conduct, they also do not view it as impeachable.

Several Democrats who are vying for their party’s presidential nomination to run against Trump are lawmakers and could be present in the House chamber for his address. They include Senator Elizabeth Warren, Senator Amy Klobuchar, Senator Michael Bennet and Representative Tulsi Gabbard.

Past presidents have made a call for unity in their addresses to the nation. Trump used his 2019 State of the Union to inflate his economic achievements and tout numbers that didn’t match up with official data.

Polls show the economy is a bright spot for the president. A Washington Post/ABC News poll released late last month showed 56% of Americans approve of the president’s handling of the economy, up 10 percentage points since September to a high for Trump’s presidency.

In his Sunday interview, Trump said low unemployment and declining poverty among racial and ethnic minorities has created a “positive revolution.”

“I don’t know how anybody could possibly beat me with that vote,” he said.

Trump will attribute the strong economic indicators to “phase one” of a trade deal with China and a revamped trade pact with Mexico and Canada, the official said, as well as other initiatives.

Trump will make specific requests for Congress to act on health care, according to the official. Trump has long spoken about working with congressional Democrats to lower the price of prescription drugs, but the two sides have disagreed on how to achieve that goal.

The White House last year threatened to veto a House-passed proposal that would require the government to negotiate drug prices for Medicare and other insurance plans. It has thrown its support behind a bipartisan Senate bill that also has little chance of becoming law.