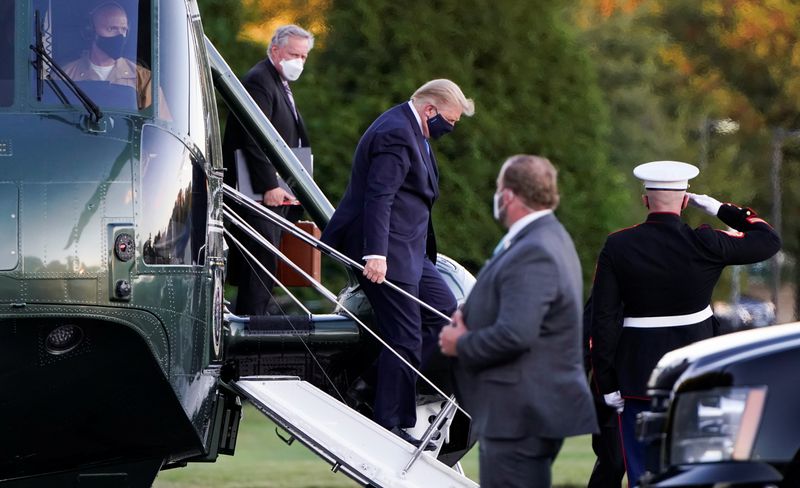 (Reuters) – Investors are gauging how a potential deterioration in President Donald Trump’s health could impact asset prices in coming weeks, as the U.S. leader remains hospitalized after being diagnosed with COVID-19.

So far, markets have been comparatively sanguine: hopes of a breakthrough in talks among U.S. lawmakers on another stimulus package took the edge off a stock market selloff on Friday, with the S&P 500 losing less than 1% and so-called safe-haven assets seeing limited demand. News of Trump’s hospitalization at a military medical center outside Washington, where he remained on Saturday, came after trading ended on Friday.

Many investors are concerned, however, that a serious decline in Trump’s health less than a month before Americans go to the polls on Nov. 3 could roil a U.S. stock market that recently notched its worst monthly performance since its selloff in March while causing turbulence in other assets.

If the president’s health is in jeopardy, there’s “too much uncertainty in the situation for the markets just to shrug it off,” said Willie Delwiche, investment strategist at Baird.

The various outcomes investors currently envision run the gamut from a quick recovery that bolsters Trump’s image as a fighter to a drawn-out illness or death stoking uncertainty and drying up risk appetite across markets.

Should uncertainty persist, technology and momentum stocks that have led this year’s rally may be particularly vulnerable to a selloff, some investors said. The tech-heavy Nasdaq fell more than 2% on Friday, double the S&P 500’s decline.

“If people … get nervous right now, probably it manifests itself in crowded trades like tech and mega-cap being unwound a bit,” Delwiche said

A record 80% of fund managers surveyed last month by BofA Global Research said that buying technology stocks was the market’s “most crowded” trade.

The concentration of investors in big tech stocks has also raised concerns over their outsized sway on moves in the broader market.

Trump’s diagnosis has intensified the spotlight on the fiscal stimulus talks in Washington, with investors saying agreement on another aid package could act as a stabilizing force on markets in the face of election-related uncertainty.

U.S. House of Representatives Speaker Nancy Pelosi, a Democrat, said on Friday that negotiations were continuing, but she is waiting for a response from the White House on key areas.

Fresh stimulus could speed economic healing from the impact of the pandemic, which has put millions of Americans out of work, and benefit economically-sensitive companies whose stock performance has lagged this year, investors said.

For those who are underweight stocks, “we would be using this volatility as an opportunity to increase equities because we think we’re in an early-stage economic recovery,” said Keith Lerner, chief market strategist at Truist/SunTrust Advisory.

Market action on Friday suggested some investors may have been positioning for a stimulus announcement in the midst of the selloff.

The S&P 500 sectors representing industrials and financials, two groups that are more sensitive to a broad economic recovery, rallied 1.1% and 0.7%, respectively, while the broader index declined.

Even with worries over Trump’s condition, “the fiscal program has been the loudest noise in the market,” said Arnim Holzer, macro and correlation defense strategist at EAB Investment Group.

Despite Trump’s illness, futures on the Cboe Volatility Index continued to show expectations of elevated volatility after the Nov. 3 vote, a pattern consistent with concerns of a contested election.

Nagging doubts over whether the Republican president would agree to hand over the keys to the White House if he loses have grown in recent weeks. During his first debate with Democratic challenger Joe Biden on Tuesday, Trump declined to commit to accepting the results, repeating his unfounded complaint that mail-in ballots would lead to election fraud.

“If Trump’s health does not recover … then he might give up on contesting the election,” said Michael Purves, chief executive of Tallbacken Capital Advisors. But “markets are not shifting off the contested election thing right now.”