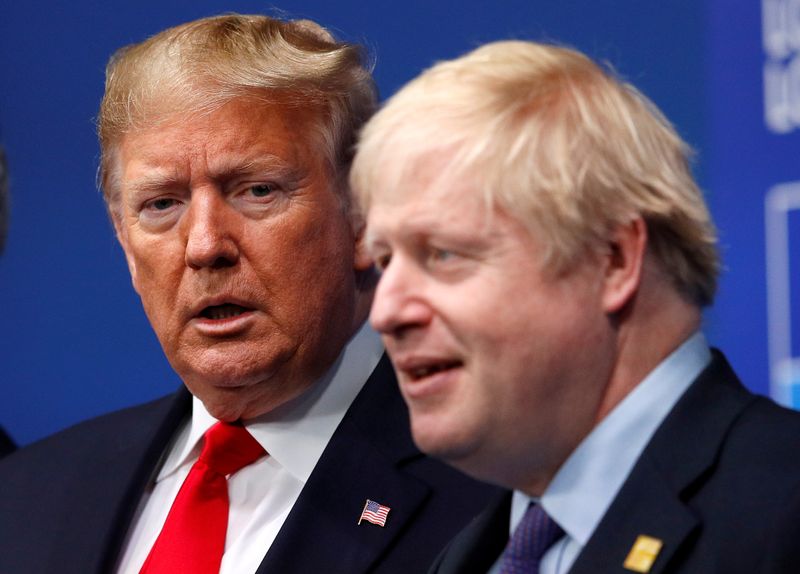 WASHINGTON (Reuters) – Britain is the United States’ closest ally but their long friendship may be sorely tested as the two countries try to forge a new trade agreement after Britain’s exit from the European Union.

U.S. Treasury Secretary Steven Mnuchin said on Saturday in London that he was optimistic that a bilateral deal with Britain could be reached as soon as this year.

But Mnuchin gave up no ground after a second meeting with his UK counterpart, Sajid Javid. Javid has insisted that Britain will proceed with a unilateral digital services tax, despite a U.S. threat to levy retaliatory tariffs on British-made autos.

The UK Treasury declined to comment on the private meeting.

The divide highlights the challenges ahead as the Trump administration seeks a new bilateral agreement with Britain, part of a broader push to rebalance relations with nearly all its major trading partners.

The stakes are high – British Prime Minister Boris Johnson has pegged the trade deal with United States as a way to ease the pain of breaking with Europe, Britain’s largest trade partner. U.S. President Donald Trump, has promised a “massive” trade deal to support Brexit, the product of a populist movement similar to his “America First” agenda.

The goodwill and special relationship the two countries have enjoyed for decades may not count for much, experts say.

“Trump is not going to be doing Johnson any favors,” said Amanda Sloat, a senior fellow with the Brookings Institution in Washington. “He’s not going to give him a trade deal without major concessions.”

The United States also wants Britain to change the way its National Health Service prices drugs and allow in more U.S. pharmaceuticals, which could prove politically unpopular for Johnson’s government.

Reaching a meaningful deal will be “exceedingly difficult,” said Jacob Funk Kirkegaard, a senior fellow at the Peterson Institute for International Economics in Washington. “There are very deep-rooted issues on which the United States and the UK are diametrically opposed.”

Differences over those and other issues meant three years of U.S.-European Union trade negotiations ran aground during the Obama administration.

Tensions boiled over at the World Economic Forum in Davos, Switzerland.

Britain exported $11 billion in passenger cars, engines, tires and other automotive components to the United States in 2018, the largest sector in a total of $127 billion in exports.

Eliminating the existing 2.5% U.S. car tariff and averting future auto tariffs will be a high priority for Britain in the talks.

Britain will also seek greater access to U.S. state and local public procurement contracts, and services such as U.S. coastal shipping. But those are areas governed by U.S. laws, and a trade agreement may not apply.

That includes the removal of non-tariff barriers, such as restrictions on chlorine-treated chicken, genetically modified crops and hormone-treated meat. Such products are common in the United States but shunned in Britain.

The United States is also pressing for full market access for U.S. pharmaceutical products and medical devices. That would require changes to Britain’s NHS pricing restrictions, and could increase the cost of drugs in Britain.

In comments https://www.phrma.org/-/media/Project/PhRMA/PhRMA-Org/PhRMA-Org/PDF/PhRMA-Comments-on-US-UK-Trade-Agreement.pdf to the USTR last year, a U.S. pharmaceutical trade group argued that the NHS’ cost controls for pricing “innovative” drugs did not “recognize their value to patients and society.”

That is not likely to sway British officials. “The NHS is a religion in the UK. That’s where the real red line is,” said Sam Lowe, a senior research fellow at the Centre for European Reform in London. “If the U.S. is saying: ‘Pay more for medicine,’ that’s quite difficult to get past the Treasury and the taxpayers.”

Some analysts say Washington’s best bet is a limited “Phase 1” deal with Britain, as was recently signed with China. Such an agreement would not likely require approval by the U.S. Congress.

That would provide short-term political victories for both Britain’s Johnson and Trump, said Lowe. Trump is seeking re-election in November.

A mini-deal could focus on financial services and convergence on some product and services regulations. It would fall far short of a deal that provides an alternative to Britain’s unfettered access to the European Union that both Trump and Johnson have promised.