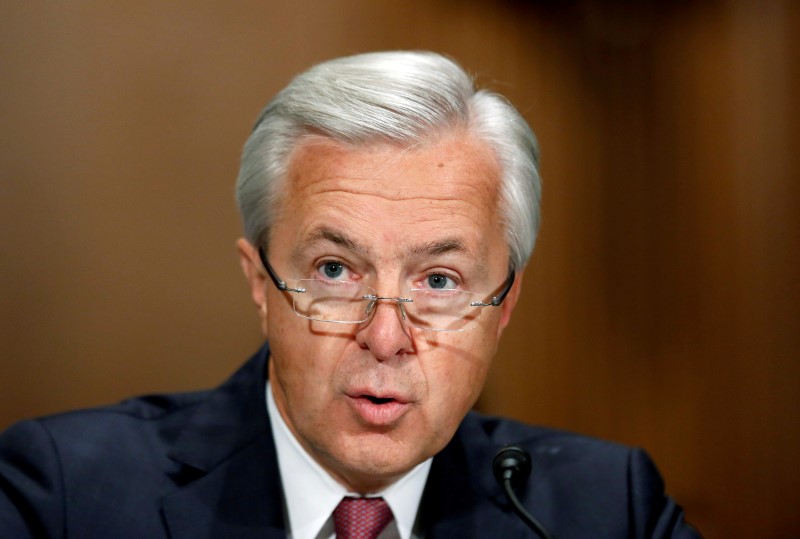 By Chris Prentice and Imani Moise

WASHINGTON (Reuters) – Wells Fargo (NYSE:) & Co’s U.S. regulator on Thursday announced it had banned former Chief Executive John Stumpf from the banking industry and charged him and seven other former executives combined more than $58 million in civil penalties for their roles in the bank’s multi-year sales practices scandal.

The action by the Office of the Comptroller of the Currency (OCC) marks a rare example of senior executives being held personally accountable for failing to put a stop to misconduct at their bank. It also broke new ground for the regulator, which forced Stumpf to pay $17.5 million to settle the charges against him – the largest ever penalty it has secured from an individual.

The OCC’s probe is one of several into the San Francisco-based lender, with investigations by the Department of Justice and the Securities and Exchange Commission ongoing. One person with knowledge of the OCC probe said it was far-reaching and that more individuals could be charged.

“We do not expect these penalties will end Wells Fargo’s troubles in Washington…Yet this is still a positive development for Wells Fargo as this was a hurdle that the bank was always going to have to clear,” said Jaret Seiberg, an analyst at Cowen Washington Research Group, in a note.

Some of the OCC’s findings, though, contradict Wells Fargo’s 2017 board report into the scandal, which largely pinned the blame on a small number of executives, in particular the bank’s former retail banking head Carrie Tolstedt. But on Thursday, the OCC said many members of the bank’s senior leadership were culpable, a finding that is likely to spark further questions by lawmakers who may push for criminal convictions, said Sieberg.

Stumpf, who could not immediately be reached for comment, also agreed to a lifetime ban on working for an OCC-regulated bank. He abruptly left the company in October 2016 after a nearly a decade at the helm.

Five other former executives refused to settle, including Tolstedt who is facing a potential $25 million civil monetary penalty, James Strother, the former general counsel, and Claudia Russ Anderson, the former community bank group risk officer, who both face $5 million fines. They and two auditing executives may ultimately fight the charges before a judge under the OCC’s administrative process.

“Throughout her career, Ms. Tolstedt acted with the utmost integrity and concern for doing the right thing. A full and fair examination of the facts will vindicate Carrie,” a lawyer for Tolstedt said in a statement.

In a statement, Strother’s lawyer said the former Wells Fargo executive “acted with the utmost integrity and transparency” and that the OCC’s charges are “false and unfounded.”

Russ Anderson could not immediately be reached for comment.

In a memo to Wells Fargo employees, CEO Charlie Scharf said the company was reviewing Thursday’s filings and will determine what, if any, further action is appropriate in respect to any of the individuals who were named. The memo added that the bank would not make any remaining compensation payments that may be owed to those individuals in the meantime.

Wells Fargo, the country’s fourth largest U.S. lender, has paid out more than $4 billion in fines and penalties since the 2016 revelation that the bank’s sales practices encouraged employees to open potentially millions of unauthorized bank accounts in order to hit lofty sales targets.

Since then, internal and external probes have uncovered issues in each of Wells Fargo’s major business lines, including wealth management and the commercial bank. The fallout has also resulted in the Federal Reserve imposing an unprecedented growth restriction on Wells Fargo’s balance sheet until it proves it has fixed its risk management and controls.

While Wells Fargo has inked multiple federal and private settlements for its sales practices, the OCC action marks the first federal action against individuals for their roles in the scandal, instead of just the institution.

In its complaint, the OCC said that senior bank leadership must have been aware of rampant sales misconduct, citing large numbers of employee complaints and years’ worth of other evidence. For example, an internal investigation conducted by the bank in 2004 found that instances in which staff “gamed” the sales system to meet targets climbed 979% from 2000 to 2004.

The number of calls to the bank’s internal ethics hotline steadily climbed from 2006 through 2014, the OCC said, with nearly half of all cases investigated related to sales misconduct.