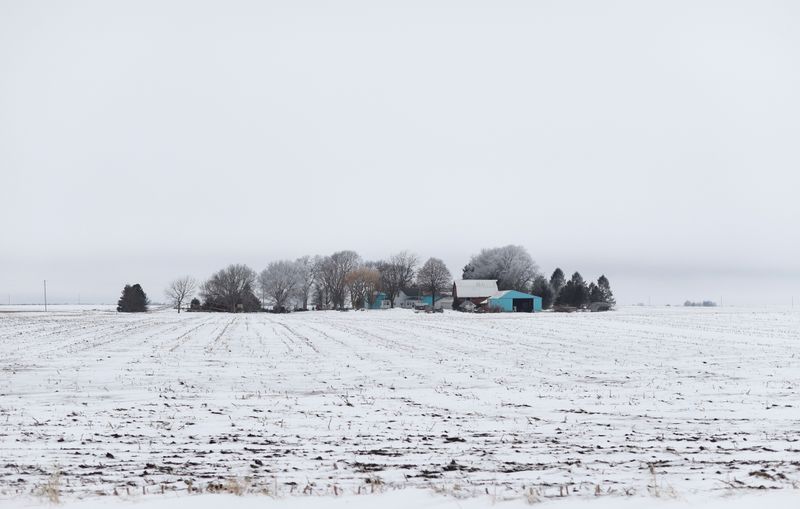 © Reuters. FILE PHOTO: A small rural farm is seen in a field of snow near Nevada, Iowa 2/2

CHICAGO (Reuters) – U.S. farm bankruptcy rates jumped 20% in 2019 – to an eight-year high – as financial woes in the U.S. agricultural economy continued in spite of massive federal bail-out funding, according to federal court data.

According to data released this week by the United States Courts, family farmers filed 595 Chapter 12 bankruptcies in 2019, up from 498 filings a year earlier. The data also shows that such filings – known as “family farmer” bankruptcies – have steadily increased every year for the past five years.

Farmers across the nation also have retired or sold their farms because of the financial strains, changing the face of Midwestern towns and concentrating the business in fewer hands.

“I just had a farmer contact me last week, telling me he can’t get financing for his inputs this year and he doesn’t know what to do,” said Charles E. Covey, a bankruptcy attorney based in Peoria, Illinois.

Chapter 12 is a part of the federal bankruptcy code that is designed for family farmers and fishermen to restructure their debts. It was created during the 1980s farm crisis as a simple court procedure to let family farmers keep operating while working out a plan to repay lenders.

Even billions of dollars spent over the past two years in government agricultural assistance has not stemmed the bleeding.

Nearly one-third of projected U.S. net farm income in 2019 came from government aid and taxpayer-subsidized commodity insurance payments, according to the U.S. Department of Agriculture.

Some of the biggest bankruptcy rate increases were seen in regions, such as apple growers in the Pacific Northwest, that did not receive much or any of the latest round of trade aid from the Trump administration.

The bankruptcy data “signals that things have not turned around,” said John Newton, chief economist for the American Farm Bureau Federation. “We still have supply and demand uncertainty. If we see prolonged low prices, I wouldn’t expect this trend to slow down.”