Home
Market
U.S. farmers increased support for Trump ahead of 'Phase 1' signing – Reuters/Ipsos poll
Prev Article Next Article
This post was originally published on this sitehttps://i-invdn-com.akamaized.net/trkd-images/LYNXMPEG0F1QU_L.jpg 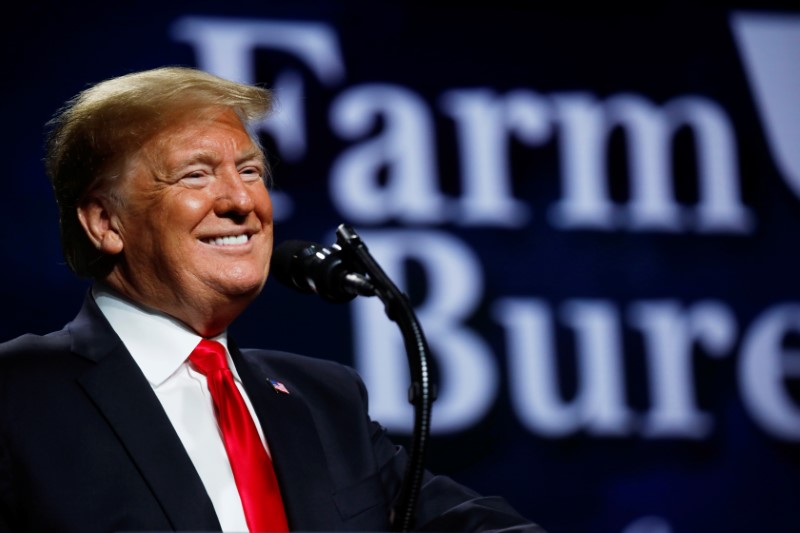 By Tom Polansek and Chris Kahn

The results show American farmers increasingly backed the Republican president as he sought to pause a drawn out trade war with Beijing that cut deeply into U.S. agricultural sales. The trade deal, announced Dec. 13 and signed on Wednesday, paves the way for increased farm exports to China, though critics have said it failed to address structural economic differences.

The nation’s some 3 million farmers broadly voted for Trump in 2016 but have suffered more than other sectors from the tit-for-tat tariff war with China that started in 2018.

Among those polled in late December who said they or an immediate family member work in the agriculture industry, 49% approved of the way Trump is handling American farming and 40% disapproved. In September, 43% approved and 45% disapproved.

Of the poll’s total 4,441 respondents, 39% said they approved of the way the president is handling American farming, up from 36% in September, while 41% disapproved, down from 44%.

“Everybody’s hoping it’s going to get all in place andthere’s going to be a boom,” Esin Zimmerman, 53, a surveyparticipant and Republican from Madison, Minnesota, said about the trade deal. Zimmerman, whose husband works for agricultural trader Cargill Inc, voted for Trump in 2016 and wants to see him re-elected.

Trump’s critics say the trade war has not been worth the lost sales of soybeans, pork and other goods in 2018 and 2019 and call the deal’s target of nearly doubling the value of U.S. farm exports to China from 2017 levels unrealistic.

Trump faced anger from farmers last year because his administration’s Environmental Protection Agency has roughly quadrupled exemptions for oil refiners that are required to blend corn-based ethanol into gasoline. Corn growers and biofuel producers say this has significantly undercut demand for ethanol.

However, many farmers see few alternatives to Trump.

“Even during those darkest days, his support among farmers only fell off about 5% so I think that it’s not going to be hard for him to regain 5%,” Republican U.S. Senator Charles Grassley of Iowa said on Tuesday during a call with reporters. “The good news has come since then.”

Poll respondents from agricultural areas said they also supported Trump due to the country’s low unemployment rate, record highs in the stock market and his attempts to limit immigration.

About 35% of respondents from farm country said the federal government made it tougher for American farmers to succeed, down from 45% in September.

“I think he’s trying to bring this country back to where it should be,” said Susan Pavlish, 58, who describes herself as a farm wife in Crete, Nebraska. Her husband grows corn and soybeans across 1,200 acres.

Trump’s standing also increased slightly among residents of coal-producing areas. About 40% of those respondents from top coal-producing states said they approved of the way Trump was handling the sector in December, up from 36% in September, while 38% disapproved, down from 43%.

Among those respondents whose livelihood is linked to manufacturing, 49% said they approved of Trump’s handling of the industry, down from 52% in September. About 38% said they disapproved, up from 34%.

Industrial swing states such as Michigan, Ohio and Wisconsin that supported Trump in 2016 are now shedding thousands of factory jobs.

The Reuters/Ipsos poll was conducted between Dec. 17-23. It gathered responses from 4,441 adults in all, including 374 people who said they were personally employed as farmers, had immediate family members who were farmers or were employed in a business closely tied to the U.S. agriculture industry.

It also gathered responses from 549 people who were personally employed by American factories or had immediate family members who were, and another 533 people who lived in major coal-producing states including Wyoming, West Virginia, Kentucky, Pennsylvania and Illinois.