Home
Market
U.S. futures fall in choppy trade as stimulus measures in focus
Prev Article Next Article
This post was originally published on this sitehttps://i-invdn-com.akamaized.net/trkd-images/LYNXMPEG211FP_L.jpg 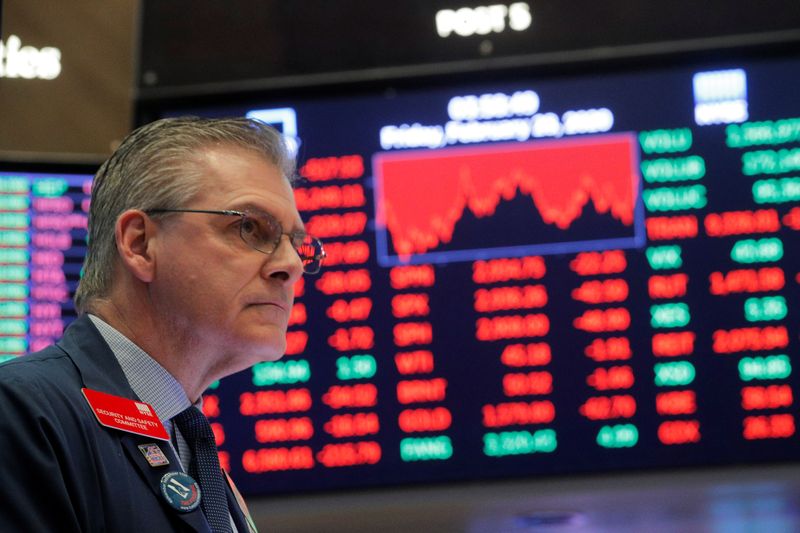 (Reuters) – U.S. stock index futures fell in volatile trading on Monday, as investors weighed the efficacy of interest rate cuts amid growing evidence of the economic impact of the coronavirus outbreak.

Wall Street recorded its biggest weekly decline since the 2008 financial crisis on Friday amid rampant fears of a recession resulting from the epidemic, which has now infected around 86,000 people and killed more than 3,000.

Latest data from China showed factory activity in February contracted at its sharpest pace on record, underlining the impact on the world’s second biggest economy from drastic travel curbs and other public health measures.

The figures prompted reassurances from the U.S. Federal Reserve and the Bank of Japan to intervene with monetary stimulus, if needed, sparking hopes of a coordinated effort by central banks to inject liquidity and shore up growth.

Investors now expect the Fed to deliver a 50 basis points rate cut when it meets on March 17-18. [USD/]

Financial markets are also awaiting final readings of the U.S. Markit and ISM manufacturing indexes to gauge the health of the domestic economy.

Flash readings of the indexes last month showed business activity in both the manufacturing and services sectors stalled in February.

Cruise operator Carnival (NYSE:) Corp fell 8.1% in premarket trading as the travel and leisure sector continued to reel under disruptions caused by the virus outbreak.

Airline stocks were further pressured by a jump in oil prices, which rose on hopes of a deeper output cut. [O/R]

In a bright spot, China’s JD.com Inc rose 4.9% after it forecast at least a 10% rise in revenue for the first quarter, after posting better-than-expected quarterly results.