Home
Market
U.S. may take targeted steps to stimulate economy amid coronavirus: Kudlow
Prev Article Next Article
This post was originally published on this sitehttps://i-invdn-com.akamaized.net/trkd-images/LYNXMPEG251EG_L.jpg 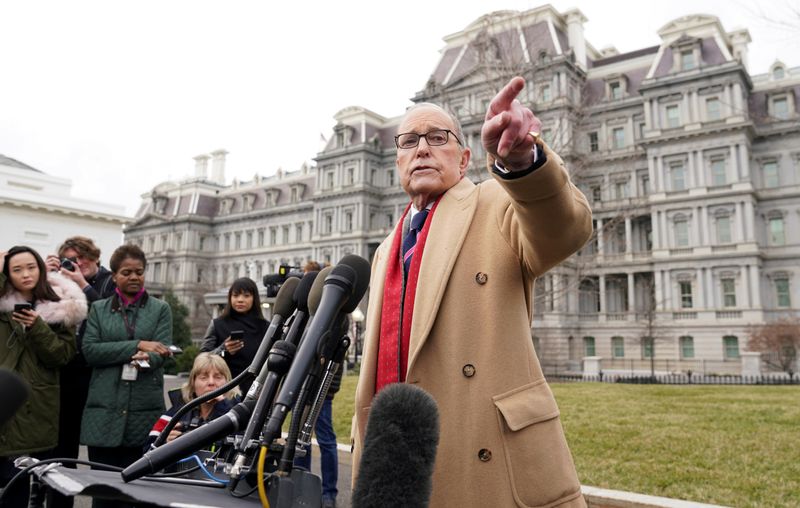 WASHINGTON (Reuters) – The Trump administration may take targeted steps to stimulate the U.S. economy amid the coronavirus outbreak that is likely to temporarily drag down some sectors, White House economic adviser Larry Kudlow said on Friday, adding that more information was needed first.

Kudlow, speaking in an interview on CNBC, said it was too early to determine the magnitude of any slowdown but that the nation’s overall economy remained fundamentally strong and that it was not headed for a recession.

U.S. officials were concerned about people who may have to stay home because of the outbreak and lose wages, as well as about small business and airlines, he told Bloomberg News in a separate interview.

“We’re looking for targeted measures that will do the most good in a short period of time,” Kudlow told Bloomberg News.

“To pull that trigger will not take much time at all,” possibly via an executive order, he added, saying more information would likely come next week.

He added that the White House could also turn again to Congress, which this week approved an $8.3 billion bill aimed at efforts to boost the U.S. response to the outbreak, including money for drug and vaccine development as well as the public health efforts.