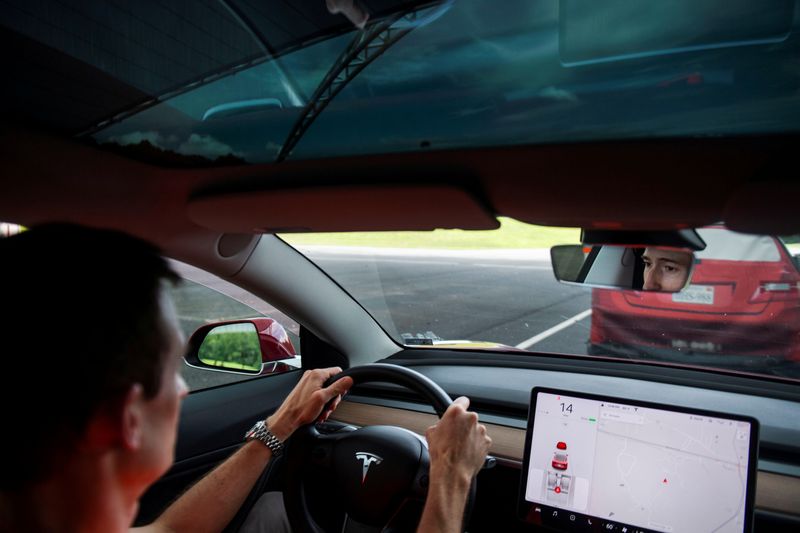 (Reuters) – Autopilot, Super Cruise and Drive Pilot are different names given to technology that automates steering and braking in a growing number of vehicles, but none of it can safely “pilot” cars without regular human intervention.

These systems and the potential for consumers to misunderstand and misuse them are putting pressure on regulators everywhere to overhaul safety testing and consumer rating systems that have not kept up with the pace of deployment of new semi-automated driving technology.

That may be especially true in the United States, where the National Transportation Safety Board chided regulators this week for lagging their European counterparts in efforts to ensure consumer and road safety.

The acting head of the U.S. vehicle safety regulator said on Wednesday that his agency would make changes this year to a testing program that assigns safety grades to new and future vehicles.

NHTSA in December 2015 issued proposed rulemaking for testing procedures that would be similar to more comprehensive testing done by European regulators.

No rules have been put forward since then, however, and Owens’ comments came a day after the NTSB sharply criticized NHTSA for its hands off approach to overseeing semi-automated driving technology. The NTSB, an independent U.S. government agency, also compared NHTSA’s testing and ratings unfavorably to consumer safety systems put in place by European agencies.[nL1N2AP0SD]

Surveys have shown that consumers overestimate the capabilities of semi-automated systems, as automakers race to deliver on the promise of truly driverless cars. Safety advocates also criticize manufacturers for using misleading terms to market those systems, including Autopilot, Pro Pilot Assist and Traffic Jam Pilot.

European regulators have been expanding their rules and ratings to evaluate new technology such as automatic braking and lane-keeping, while U.S. regulators have done little to change their traditional “five star” crash test grading system.

In 2018, European Union regulators required the installation of acoustic and visual warning signals for lane-keeping systems every 15 seconds if drivers take their hands off the wheel.

As a result, Tesla (O:) had to issue a software update to its Autopilot system in the EU.

A regulatory body is currently working on rules for more advanced hands-off systems that can control braking, acceleration and lane changes at speeds of up to 60 km/h (37 mph).

Under draft EU rules, carmakers among other things need to show how the system safely hands control back to the driver, how the car monitors the road and how it reacts in emergency situations.

Euro NCAP began rating automatic braking systems in 2014. It is testing the performance of advanced cruise control, lane-centering systems and blind spot detection since 2018 and beginning in May will also grade how well a car’s system is keeping the driver engaged.

The group is a non-governmental body but funded by some EU countries and also receives money from national motor clubs and insurers. Matthew Avery, a Euro NCAP board member, said the group was sharing testing methods with NHTSA and the NTSB on a regular basis.

“The manufacturers initially scream blue murder and say our targets are impossible to achieve, but then one of them does it and everyone follows,” he said.

Carmakers in the United States are allowed to self-certify that their vehicles comply with existing rules, said University of South Carolina law professor Bryant Walker Smith, who focuses on automated driving. But there are currently no rules for ADAS.

NHTSA also publishes an annual New Car Assessment Program (NCAP), which evaluates the crashworthiness of a vehicle and outlines what semi-automated features a car comes with. But the agency does not assess the safety of those systems despite nearly all modern cars being equipped with some features like automatic emergency braking.