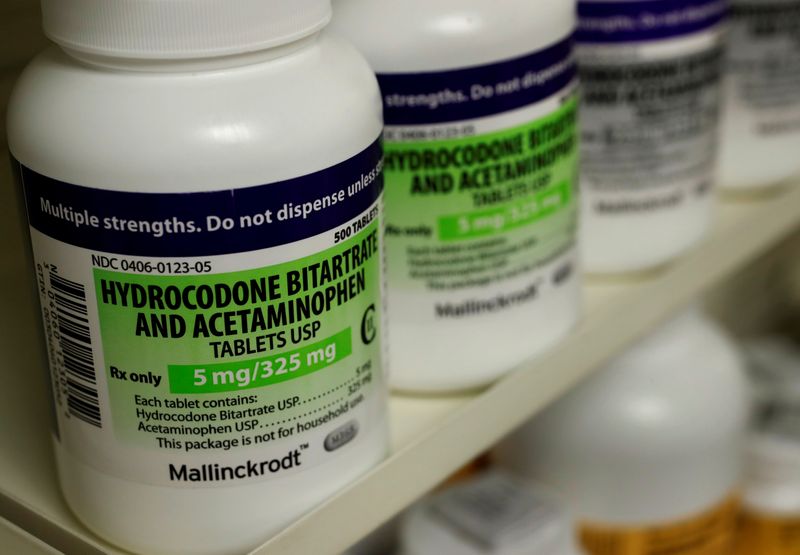 © Reuters. Bottles of prescription painkillers Hydrocodine Bitartrate and Acetaminopohen, 5mg/325mg pills, made by Mallinckrodt sit on a shelf at a local pharmacy

(Reuters) – The United States sued a unit of the drugmaker Mallinckrodt (NYSE:) Plc on Tuesday, accusing it of defrauding Medicaid out of hundreds of millions of dollars as a result of “meteoric” price increases for its biggest-selling drug, Acthar Gel.

The drug is used to treat spasms in infants as well as multiple sclerosis, and generated about 30% of Mallinckrodt’s $3.16 billion of net sales in the Staines-upon-Thames, England-based company’s latest fiscal year.

Mallinckrodt had sued the U.S. Department of Health and Human Services last May over the calculation of Acthar rebates, and said the judge there has barred any enforcement action while the case was pending.

In a statement on Tuesday, Mallinckrodt accused the government of attempting an “end-run” around that case by filing “an unnecessary, duplicative and wasteful lawsuit on the exact same issue.”

Under the Medicaid Drug Rebate Program, drugmakers pay quarterly rebates to state Medicaid programs in exchange for Medicaid’s coverage of their drugs.

The program shields Medicaid when drug prices rise faster than inflation, by calculating rebates based on a drug’s price in 1990 or when the drug was first marketed, whichever is later.

But the government said that while Acthar was first marketed in 1952, Mallinckrodt and its predecessor Questcor calculated rebates as though marketing began in 2013, reflecting Acthar’s then-recent regulatory approval to treat infantile spasms.

The government said Mallinckrodt’s rebates did not reflect the increase in Acthar’s price per vial to nearly $30,000 in 2013 from $50 in 2001, when Questcor acquired the drug, and that Mallinckrodt has defied government warnings to address this.

U.S. Attorney Andrew Lelling in Boston: “The government will always target this kind of exploitation of a program designed to provide health care to vulnerable members of our society.”

Mallinckrodt bought Questcor for about $5.8 billion in 2014.

The False Claims Act lets whistleblowers sue on behalf of the government, and share in recoveries.