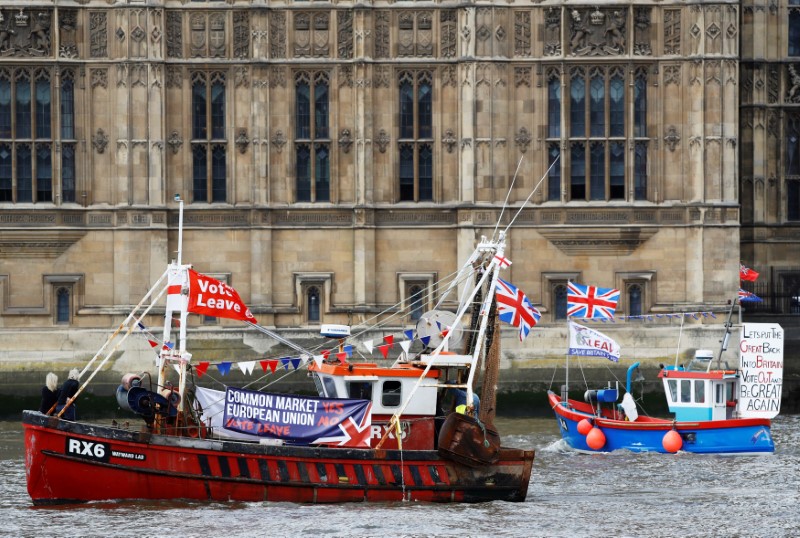 © Reuters. FILE PHOTO: Part of a flotilla of fishing vessels campaigning to leave the European Union sails past Parliament on the river Thames in London

LONDON (Reuters) – Britain’s finance sector is losing hope of securing even basic access to European Union markets from Dec. 31, as talk that the EU wants UK fishing rights in exchange draws the industry into a political struggle between the bloc and its departing member.

But bank sources say a push by the EU for fishing access to UK waters and London’s stance that it will diverge from EU rules are prompting them to review hard-Brexit plans that could see more jobs than anticipated move to Europe.

Sources from three international banks fear that access will depend on a broader trade-off such as Britain allowing fishing in its waters — a concession they feel the government is reluctant to make.

“We’re now hearing very explicitly — it’s not even the rumor mill — the European Commission has said these are politically linked to progress in phase-two negotiations,” one banking source told Reuters.

“As one official put it to me, if ‘fish for financial services’ is going badly, this will impact the Commission’s willingness to grant equivalence.”

The fishing industry is valued at about 169 times less than financial services and official data shows it employs just 8,000 people compared to more than a million in finance.

But regaining control of Britain’s rich fishing waters was a totem for Brexit campaigners.

A European Commission spokesman referred to a January EU document saying the bloc and Britain should endeavour to complete equivalence assessments before June 30. He declined to comment further.

Since the 2016 Brexit vote, the sector has reorganized to preserve a foothold in the EU, launching or beefing up subsidiaries and relocating staff and capital. Many banks and money managers are preparing for a further transfer of resources after a transition period ends in December.

Consultants EY said this week that around 7,000 financial services jobs will move from Britain to staff new EU hubs.

Failing to obtain equivalence could add risk-management, compliance, middle and back office roles to that figure, as well as trading and client-facing jobs, the sources said.

Finance minister Sajid Javid said last week that Britain would not be a rule-taker after Brexit, even though some businesses could suffer from regulatory divergence.

He wants “outcomes-based” equivalence in financial services, meaning UK rules need not be identical to those in the EU but should have the same effect.

The EU updated its equivalence policy ahead of Brexit, saying third-country regimes like those in Japan and the United States do not need to be identical but must have the same “outcomes” as EU rules to give access to its markets.

But it would impose tougher scrutiny of “high-impact” countries, expected to include Britain.

The EU’s withdrawal of share trading equivalence from Switzerland during a dispute over a partnership treaty, not because of any divergence in rules, showed how equivalence can be politicised.

Bankers say jobs transferred to Europe as politicians wrangle are likely to stay there, even if equivalence is eventually granted.

“The sector’s approach has always been to prepare in a way for the worst,” a second senior banking source said.

Speaking at the World Economic Forum in Davos this week, Deutsche Bank (de:) CEO Christian Sewing recognised the risk that a trade deal would not be finalised before end-2020.

He said his bank “could do everything out of Frankfurt” but that Britain would remain an important capital market.

Financial lobby groups have warned that if Britain does not get equivalence, the government will lose valuable tax revenue.

The bloc is the biggest customer for Britain’s financial services exports, worth about 26 billion pounds annually based on unfettered access.

But lawmakers from Johnson’s Conservative Party say the City could cope with the fallout if negotiations turned sour.

“London is a marketplace. The marketplace doesn’t come to them (the EU) … the health of the City doesn’t depend nearly to the extent that is believed on having some privileged position in the EU,” said Peter Lilley, who sits in parliament’s upper chamber.

A second Conservative lawmaker, Tim Loughton, said Johnson would not consider swapping assets such as fishing rights to cut a better deal for banks, which have struggled to rebuild their image since the 2008 financial crisis.

He said the EU was bluffing and would not politicize financial services because it, too, risked losing access to the region’s deepest markets.

“It would be a massive exercise in cutting off your nose to spite your face,” he said.