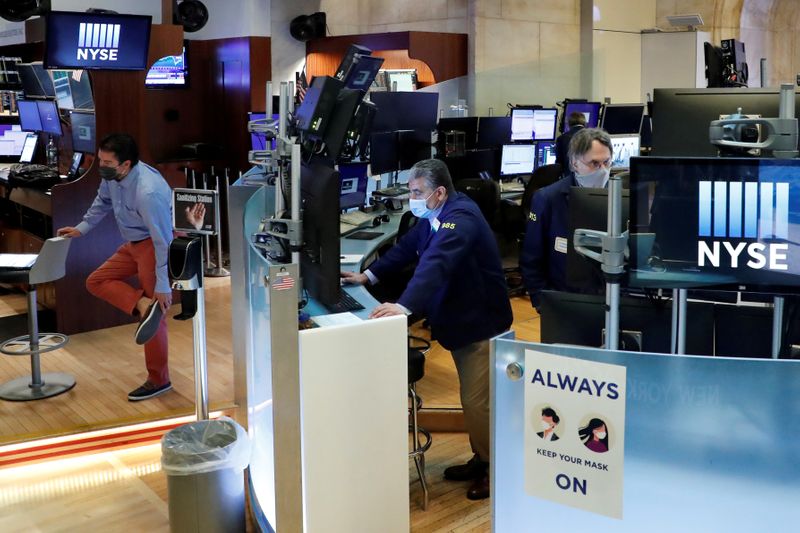 (Reuters) – As world stock markets end a turbulent six months near record highs, investors appear to be betting heavily that economies will recover quickly from the coronavirus crisis, fuelled by zero interest rates and abundant monetary and fiscal stimulus.

Despite the economic ravages of the pandemic, the total market capitalization of global stocks is now 52% of expected global economic output — the highest such ratio in 25 years.

If investors seem to be overlooking the prospect that business earnings may not recover in time to justify such lofty stock valuations, it is because of a lack of alternatives, a fear of inflation and the cheapness of stocks, analysts say.

“First, new, mostly young investors have been lured into the market by cheap commissions and a gamblers’ mentality,” said Tim Bain, president at Spark Asset Management in Statesville, North Carolina.

Bain said global stocks at this year’s troughs were down roughly 35%, which was the average decline in bear markets since the Great Depression.

“At that point the risk/reward shifted in favour of risk takers, and the stocks of companies deemed essential that had fallen as much as any other stock all of a sudden looked cheap.”

The rally has been narrow, however, with investors preferring well-established large-cap stocks to smaller ones.

According to Refinitiv data, large-cap stocks have risen over 12% in the past two months, while small- and mid-cap firms added just 6%.

The disconnect between the markets and economies could continue until large-cap names reach bubble levels, Spark’s Bain said, adding that defining those bubble levels was subjective.

The drop in bond yields has added allure to equities, despite worries over earnings and the hit to revenues this year, analysts said.

Earnings yield, which measures how much a stock investment may earn for investors, was much higher than bond yields in most markets, Refinitiv data showed.

He pointed to 10-year U.S. Treasury yields at around 0.68% implying a price-to-earnings (PE) ratio of 147 for Treasuries.

“By contrast, the S&P 500 PE ratio of 25 times earnings seems like a bargain,” Johnson said.

Some analysts expect the disconnect between markets and real economic indicators could persist as long as stocks are perceived to be a hedge against inflation in stimulus-flooded economies. (Graphic: Earnings yield vs 10 yr benchmark yield, https://fingfx.thomsonreuters.com/gfx/mkt/jbyvrrrjlve/Earnings%20yield%20vs%2010%20yr%20benchmark%20yield.jpg)

“For most situations, the place to avoid incoming inflation is equities,” said Clem Chambers, chief executive officer at ADVFN in London.

“The apparent disconnect between the world economy and stock prices comes from the fact the latter are not rising because the market thinks companies are going to do well — instead it’s because money is going to nosedive in value.”