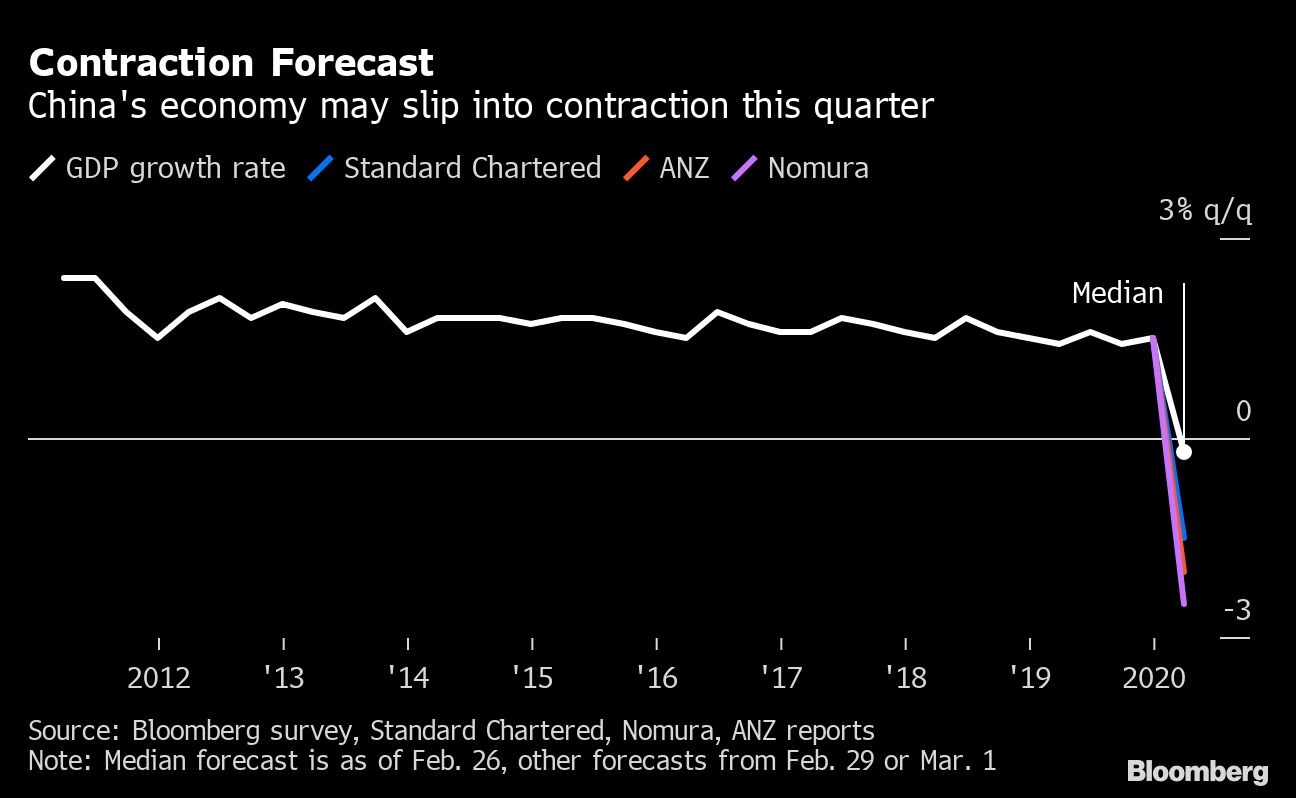 (Bloomberg) — Asia’s manufacturing took a tumble in February under the weight of the rapidly spreading coronavirus, with a severe contraction in activity in China driving down output across the region.

The numbers show how the outbreak is rippling through the region, disrupting supply chains and depressing demand. Travel restrictions are widespread, schools and businesses are shuttered in some countries and governments are scrambling to provide stimulus.

Global stock markets, which took a battering last week on concern about the virus, halted their slide on Monday. That was partly due to anticipation about central banks stepping in with monetary easing.

The Bank of Japan and the Bank of England pledged action aimed at stabilizing financial markets, days after the Federal Reserve issued its own statement that opened the door to interest rate cuts. Also on Monday, France said that Group of Seven finance ministers will hold a conference call this week to coordinate their response to the virus.

In Europe, headline manufacturing numbers were better in February than the previous month, though there were clear signs of the virus hitting business, with widespread delivery delays and steep declines in foreign orders.

“The concern is that coronavirus-related delays in shipments threaten to constrain production in the coming months,” said Chris Williamson, an economist at IHS Markit. That could prolong “a downturn that already extends to over a year.”

Manufacturing in Thailand, Malaysia and Vietnam also shrank in February. Growth at India’s factories cooled from the fastest pace in almost eight years.

China’s official PMI plunged in February to a record-low 35.7 from 50 at the start of the year, according to figures released Saturday. That signals a worse-than-expected first-quarter contraction, with Nomura Holdings Inc. projecting the economy will shrink 2.5% compared with the previous period.

“We expect China’s PMIs to see some improvement in the coming months. Yet the continued disruptions in the supply chain and weakness of the Chinese economy could put downward pressures on the regional economies for some time.”

China’s economy is gradually returning to work with activity likely running at 60%-70% capacity last week, according to a Bloomberg Economics report, up from about 50% two weeks ago.

“Evidence of factories re-starting — albeit very unevenly and tentatively — means that the recovery will be somewhat short of a resounding V-shaped rebound,” said Vishnu Varathan, head of economics and strategy at Mizuho Bank Ltd. in Singapore. “The bigger picture of a tepid recovery from brutal seizures remains.”