Home
Market
Virus Jolts China Economy, Forcing Rethink on Almost Everything
Prev Article Next Article
This post was originally published on this sitehttps://i-invdn-com.akamaized.net/news/LYNXNPEE1I0M7_M.jpg 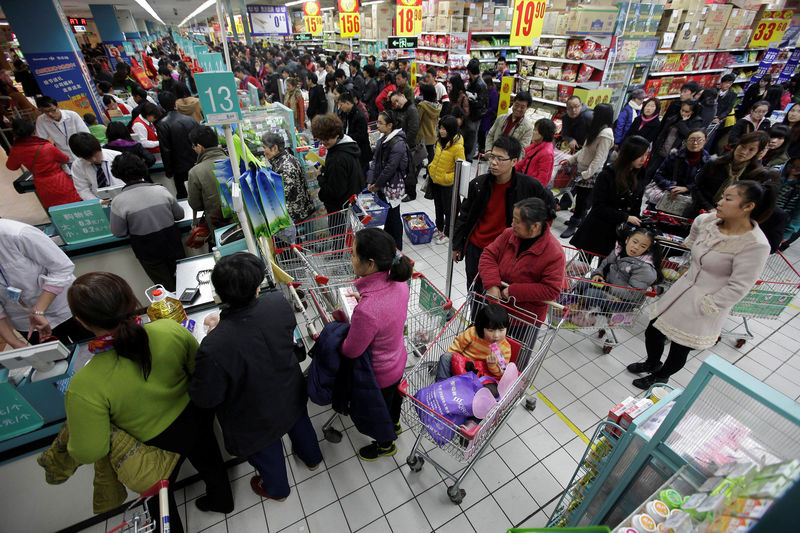 (Bloomberg) — China is preparing steps to adjust to a slower rate of economic growth as coronavirus shows few signs of abating.

Officials are evaluating whether to soften the economic-growth target for 2020, while state-owned liquefied importers are considering declaring themselves unable to fulfill some obligations on cargo deliveries — known as force majeure — according to people familiar with the matter. And authorities in Beijing are hoping the U.S. will agree to some flexibility on pledges in their phase-one trade deal, people close to the situation said.

Two-thirds of the Chinese economy will remain closed this week as several provinces took the extraordinary step of extending the Lunar New Year holiday to help curb the spread of the disease that’s claimed more than 360 lives, with confirmed cases reaching almost 17,400.

Below is a wrap of the considerations:

The annual growth target is typically unveiled in March at the country’s legislative session after being endorsed by top leaders at the yearly closed-door Central Economic Work Conference in December. Economists had expected China would aim for output growth of “around 6%” this year after seeking a range of 6% to 6.5% in 2019. Bloomberg Economics reckons growth could dip to 4.5% in the current quarter.

Officials are also considering further measures to shore up the economy, including selling more special government bonds, said the people, who asked not to be identified discussing the private talks. They also could increase the planned cap on the ratio of the budget deficit to gross domestic product, they said.

This year’s legislative gathering, which is scheduled to begin March 5, could be delayed as the epidemic disrupts work across the country.

China’s State Council Information Office didn’t immediately respond to a request for comment. Any changes to the growth target would have to be approved by top leaders of the Communist Party.

Oil consumption in China, the world’s the top crude importer and second-biggest LNG buyer, is already estimated to have dropped by 20%, which is expected to cause fuel makers to cut back production and seek to delay some oil shipments. A decline in gas demand is similarly forcing buyers to consider postponing deliveries to cope with high inventories.

LNG importers including China National Offshore Oil Corp. are still assessing the impact on consumption and haven’t decided yet whether to make the declarations, said the people, who asked not to be identified as the information isn’t public. Firms declare force majeure when they’re unable to meet contractual obligations for reason beyond their control.

CNOOC and PetroChina Co. have begun drafting the necessary documents to issue the declarations, in case they decide to move ahead, said the people. Sinopec Corp. is also considering force majeure.

PetroChina and Sinopec declined to comment. Nobody answered multiple calls to CNOOC.

The U.S. and China on Jan. 15 sealed the first phase of a trade agreement that’s supposed to take effect in mid-February. It has a clause that states the nations will consult “in the event that a natural disaster or other unforeseeable event” delays either from complying with the accord. It’s unclear whether China has formally requested such a consultation yet, but the people familiar with the matter said the plan is to ask for it at some point.

In the first year of the deal, China committed to buy an extra $76.7 billion of American goods beyond what it did in 2017, and an additional $123.3 billion in the second year. Purchases of agricultural products are particularly important for the livelihoods of American farmers who’ve been hurt in an escalating tariff war with China over the past two years and are a key base of support for President Donald Trump.

Read the latest on impact of the coronavirus from Bloomberg Economics

Even before the outbreak, China’s economy was already slowing amid weak domestic demand, a crackdown on debt and the trade war with the Trump administration. GDP expanded 6.1% last year, the least in almost three decades, and just within the range targeted by President Xi Jinping’s administration.

In a containment scenario — with a severe but short-lived impact — the virus could take China’s first-quarter gross domestic product growth down to 4.5% year on year, according to Bloomberg Economics. That’s a drop from 6% in the final period of 2019 and the lowest since quarterly data that begins in 1992.

Most of China’s provinces said before the virus became widespread they’re expecting slower economic growth in 2020, with at least 22 out of 31 major cities, provinces and autonomous regions cutting their targets as of Jan. 21, according to their work reports which lay out plans for this year.

China’s central bank took its first concrete steps to cushion the economy and plunging markets from the blow of the virus, providing short-term funding to banks and cutting the interest rate it charges for the money.

The People’s Bank of China added a net 150 billion yuan ($21.4 billion) of funds on Monday using 7-day and 14-day reverse repurchase agreements. The rate for both was cut by 10 basis points, driving down the cost of the money to “ensure ample liquidity during the special period of virus control,” it said in a statement. PBOC adviser Ma Jun indicated he expects further rate cuts later in the month.

The cash injection was part of a raft of supportive measures announced over the weekend to soften a market sell-off and help firms affected by the disease outbreak and extended holiday.