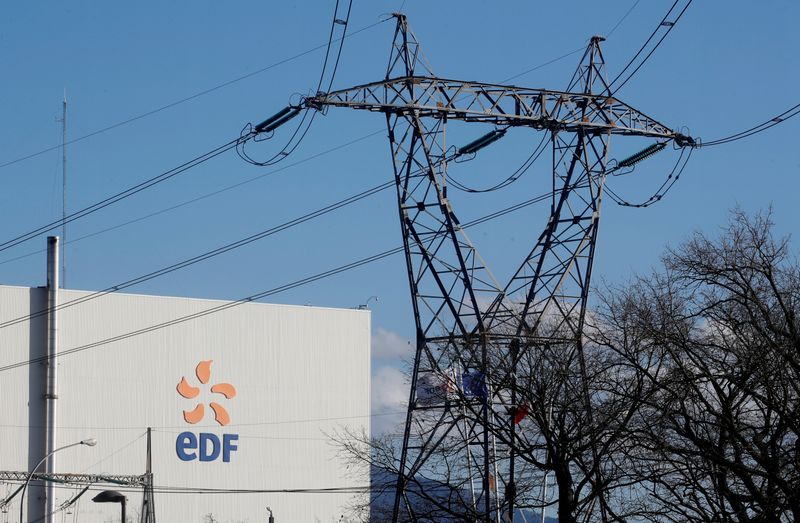 PARIS (Reuters) – Plummeting electricity demand and falling power prices during the coronavirus outbreak could leave EDF (PA:EDF) in need of a capital injection by the end of 2020 to avoid a spiralling debt crisis, a source close to the French firm and analysts said.

The state-controlled utility, which operates the world’s largest nuclear fleet, has long been weighed down by a 41.1 billion-euro debt pile.

Shrinking income due to the health crisis and likely delays in reforming France’s electricity market, which could have boosted the firm’s earnings power, are now adding to its challenges and pressuring its financial ratios.

A source close to EDF’s management said the company may need a capital injection towards the end of the year to cushion the shock, with one analyst putting the size of any rights issue at several billion euros.

“The current crisis has plunged EDF into financial difficulties… due to the fall in production and power prices in wholesale markets. This will strongly penalise the company by 2021,” the source said, requesting to remain anonymous.

The source added that although EDF’s production was hedged for this year, “difficulties will come at the end of 2020 and capitalisation may be necessary at that time.”

The need for a recapitalisation has not been broached by EDF’s board yet, the source said.

A spokesman for EDF declined to comment, saying only that the group had strong liquidity.

At the end of 2019, this included cash, cash equivalents and liquid financial assets available for sale of around 22.8 billion euros ($24.75 billion), according to a company statement, and revolving lines of credit of around 10.3 billion euros.

EDF has withdrawn all its financial targets for this year and next, scrapped plans to pay a final dividend for 2019 and cut its projected 2020 nuclear power generation to a 30-year low.

The French government, which holds an 83% stake in EDF, has set aside 20 billion euros to help large companies that need to shore up their capital base due to the pandemic.

A spokesman for the French finance ministry said that although it does not comment on individual companies, EDF was not the company most affected by the crisis.

The government is already in talks with other firms such as airline Air France-KLM over state support such as government-guaranteed loans.

EDF last raised capital in early 2017, with the government coughing up 3 billion euros of a 4 billion-euro injection.

EDF, which has 57 nuclear reactors in France accounting for around 70% of the country’s electricity needs, has also had maintenance schedules disrupted due to the outbreak.

Discussions to restructure the company and the French electricity market, which could have helped EDF cover its investments, have been delayed as the French government and the European Commission focus on the pandemic response.

A spokesperson for the European Commission said that contacts between the Commission and France were ongoing but timing and outcome could not be prejudged.

EDF’s two major capital-intensive projects – the construction of the Flamanville 3 EPR nuclear reactor in northern France, and the Hinckley Point C nuclear reactor in Britain – are already facing heavy cost overruns and delays, and could be delayed further due to the crisis.

“The current situation is not sustainable because part of our investments bring us nothing, which forces us to dig further into debt,” the EDF source said.

Borrowing more would further strain EDF’s targeted debt to EBITDA (earnings before interest, taxes, debt and amortisation) ratio, which is likely to be breached by the end of 2020, the source added.

This could trigger downgrades by credit ratings agencies and further increase borrowing costs.

“All signals are at amber level, even red,” the source said.

Tancrede Fulop, an equity analyst at Morningstar, said in a research note that EDF’s production would only gradually recover over the next few years and that a rights issue in 2020 was unavoidable.

“We calculate that a 4 billion euro rights issue will be required to rein in the leverage ratio below 3 in 2020 and 2021,” it said.

S&P Global Ratings, which placed EDF on credit watch negative after the company revised its nuclear output lower, said the company’s rating still benefited from the high “likelihood of support from the French state if needed.”