Home
Market
Wall Street flirts with correction amid pandemic fears
Prev Article Next Article
This post was originally published on this sitehttps://i-invdn-com.akamaized.net/trkd-images/LYNXNPEG1Q1AE_L.jpg 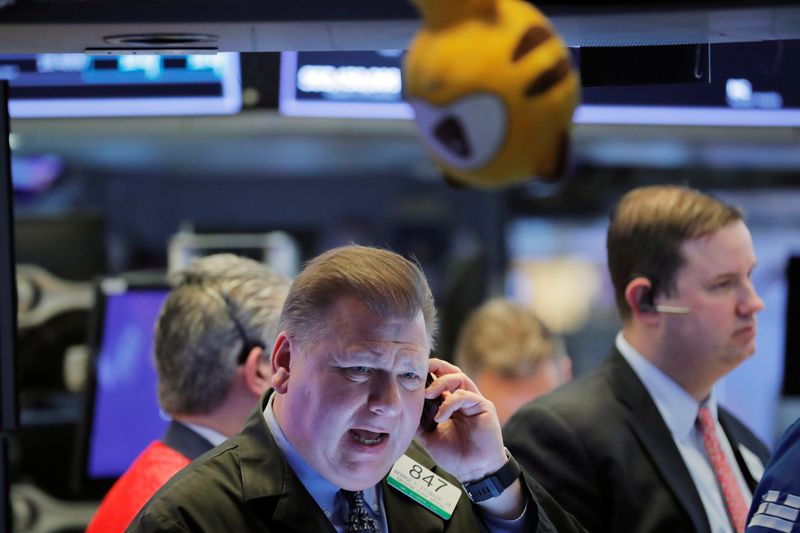 © Reuters. Traders work on the floor of the New York Stock Exchange shortly after the opening bell in New York

(Reuters) – Wall street’s main indexes tumbled for the sixth straight session on Thursday, reaching a territory that could mark a nosedive from record highs last week amid a global spread of coronavirus that intensified fears about growth and earnings.

While U.S. stocks had pared losses in early afternoon trading, the fell as much as 11.2% from its record closing high hit on Feb. 19 and the Nasdaq dropped 12.2% from its own peak.

The Dow Jones Industrials declined 12.1% from its Feb. 12 closing high at session lows. If the indexes end at these levels, it would confirm a correction.

The indexes were set for their steepest weekly pullback since the global financial crisis, as new infections reported around the world surpassed those in mainland China.

Governments battling the epidemics from Iran to Australia shut schools, canceled big events and stocked up on medical supplies.

In the United States, the Centers for Disease Control and Prevention confirmed an infection in California in a person who reportedly did not have relevant travel history or exposure to another known patient.

“It’s not a China thing, it’s becoming more global … in terms of the spread of the virus and its economic impact,” said Willie Delwiche, investment strategist at Robert W. Baird in Milwaukee.

“There’s a lot of uncertainty right now about where that impact lands … it’s also possible that forecasts are over-reacting to the downside.”

Microsoft Corp (NASDAQ:) dropped 2.6% after it warned of weakness in PC business due to a hit to its supply chain from the coronavirus, echoing similar statements from Apple Inc (NASDAQ:) and HP.

Industry analysts and economists continued to sound the alarm as they assessed the fallout of the outbreak, with Goldman Sachs (NYSE:) saying U.S. firms will generate no earnings growth in 2020.

The NYSE Arca Airline index dropped 2% on fears about travel disruptions beyond China, while the , comprised of China-exposed stocks, fell 1.5%.

Bucking the trend, 3M (NYSE:) Co rose 4% after an analyst upgraded the stock, citing possible benefit from higher sales of respirator masks during the outbreak.