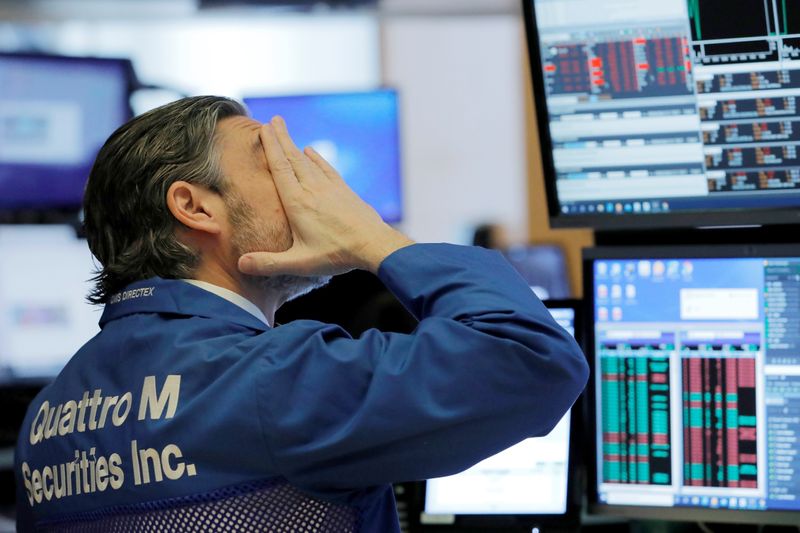 © Reuters. a trader works on the trading floor at the New York Stock Exchange (NYSE) in New York City

By Medha Singh and Sanjana Shivdas

(Reuters) – U.S. stock indexes dropped more than 2% on Thursday as the swift spread of the coronavirus in the United States led California to declare an emergency, while airline stocks were hammered by crippled travel demand.

Down almost 12% last week – its worst since the 2008 financial crisis – the had recovered some poise as Joe Biden’s surge in the Democratic primaries distracted traders from the widening impact of the virus.

The benchmark index, however, is still about 7.5% below its record close on Feb. 19 and fears about the economic fallout remain at the forefront of investors’ minds.

The U.S. death toll from the outbreak rose to 11 on Thursday and California reported the first fatality outside Washington state, a day after lawmakers approved an $8.3 billion bill to combat the outbreak.

“Volatility is the norm right now as we ascertain how much economic damage is going to be done in the wake of the coronavirus epidemic,” said Art Hogan, chief market strategist at National Securities in New York.

All of the major S&P sectors were in the red with technology stocks weighing the most on the benchmark index.

The rate-sensitive bank sub-sector dropped 4.6%, while the broader financial sector slipped 3.7%. [US/]

Traders are betting on more monetary easing after an emergency interest rate cut by the Federal Reserve earlier this week, further pressuring U.S. Treasury yields. [US/]