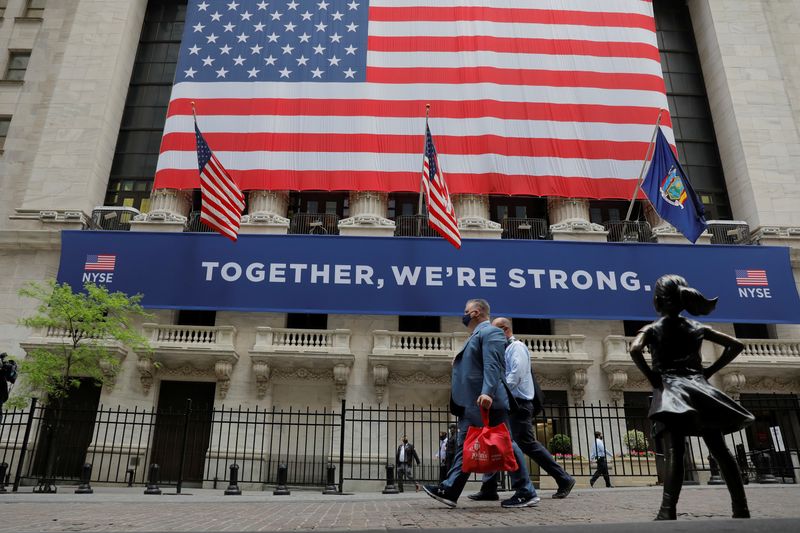 NEW YORK (Reuters) – Expectations that the global economy has dodged the worst-case coronavirus pandemic scenarios have led to a dramatic sell-off in U.S. government bonds from their record highs, pushing the yield curve to its steepest level since March.

Investors will get a chance next week to see whether the U.S. Federal Reserve agrees with their optimism. The U.S. central bank’s two-day meeting, ending on Wednesday, will be the first since April when Fed Chair Jerome Powell said the U.S. economy could feel the weight of the economic shutdown for more than a year.

The meeting will follow a surprise gain in the Labor Department’s closely watched jobs report on Friday that pushed benchmark 10-year Treasury yields to the highest since early March.

“The sell-off in the bond market in the last few weeks seems to be justified,” said Subadra Rajappa, head of U.S. rates strategy at Societe Generale (OTC:SCGLY).

While the Fed could introduce additional bond-buying programs known as quantitative easing or yield-curve control measures to target short-term rates, fund managers say they expect yields will need to rise significantly to justify any intervention in the bulk of the curve. Instead, they are watching for hints that the central bank believes the worst part of the coronavirus crisis has passed.

“They are really in this transition phase,” said Eric Stein, co-director of global income and portfolio manager at Eaton Vance (NYSE:EV). “Markets are functioning, if not all the way back to pre-shock levels, with very strong debt issuance and market improvement, even though the real economy is incredibly weak.”

As a result, Stein is looking for signs that the Fed believes the economic rebound can support the rise in yields.

“The Fed will be OK with a slow creep higher, particularly with a backdrop of a recovery, but if it moves too much and destabilizes the recovery, there’s a reason for concern,” he said.

“The Fed is likely to communicate that there is more scope for fiscal measures but that is a very uncomfortable spot to be in,” he said. “We won’t have a clear sense of direction of the economy until well into the fourth quarter because all the sequential data now is massively positive.”

“Recent economic reports in the U.S. have been uniformly weak, though not any worse than expected,” said Kevin Cummins (NYSE:CMI),senior U.S. economist at NatWest Markets.

Eddy Vataru, lead portfolio manager at Osterweis Capital Management, said the larger risk for the Fed is that rates remain too low, making it unlikely that there will be a significant push for yield curve-control measures.

“We can now discredit the worst outcomes of the virus. The sentiment around the risks around the virus have really changed,” he said, pointing to declining infection and fatality rates in coronavirus hot spots such as the New York City region.

As a result, he is moving into corporate debt and mortgage-backed securities and shying away from Treasuries, which he said have “no investment value” at their current yields.

“At the end of the day, we have a ton of stimulus, both fiscal and monetary, and the markets have reacted to it,” he said.