Home
Market
Wall Street Week Ahead: Hopes are high for tech stock 'Cadillacs'; so are their prices
Prev Article Next Article
This post was originally published on this sitehttps://i-invdn-com.akamaized.net/trkd-images/LYNXMPEG0N1V2_L.jpg 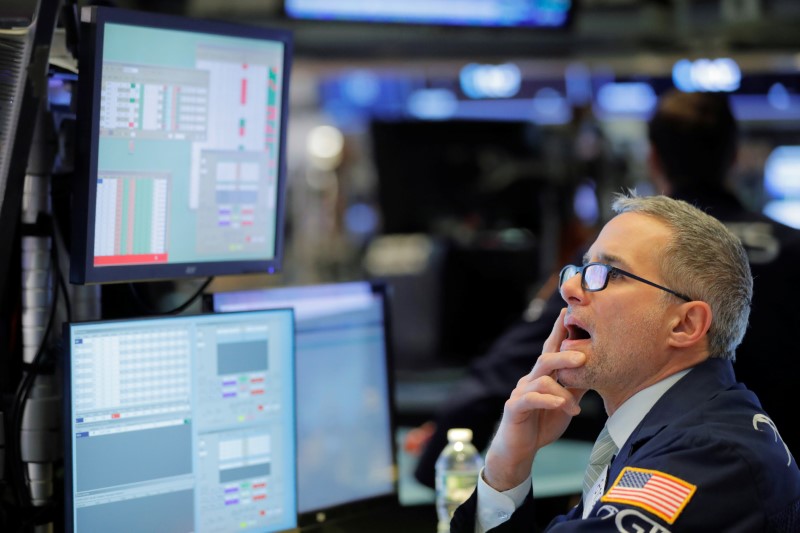 © Reuters. A trader works on the floor of the New York Stock Exchange shortly after the opening bell in New York

New York (Reuters) – Wall Street is betting that the most popular U.S. technology and internet stocks can keep outshining the broader equities market but their latest rally leaves little room for error this earnings season.

Investors dashed for the exits after Tuesday’s less-than-stellar quarterly report from Netflix (O:) – the N in FAANG – an acronym for the group of U.S. tech companies that have been the biggest drivers of the bull market.

Hopes remained high for the other FAANGs – Facebook (O:), Apple (O:), Amazon.com (O:) and Google parent Alphabet (O:), as well as Microsoft (O:), ahead of their financial reports.

Daniel Morgan, portfolio manager at Synovus Trust in Atlanta, Georgia describes the group as the “Cadillacs” of the technology sector, and said they should keep providing an outsized boost to the .

“They’re still going to be the show-business highlight stocks that everybody focuses on, and I expect them to do well,” said Morgan, a long time technology stock investor.

Analysts also see the group reporting faster revenue growth than the broader S&P 500 for the December quarter and faster earnings growth in some cases.

However with recent gains among most of the group far outstripping the broader market, general equity strategists say the market’s superstars may need to provide outsize positive surprises in their quarterly numbers and their forecasts for future growth.

In comparison to the S&P 500’s gain of roughly 12% from the start of October to Thursday’s close, Apple rose about 43% while Facebook climbed about 24% and Google jumped almost 22%, just beating Microsoft’s 20% advance.

“We do believe there could be downside for the stocks if they do not over-deliver on earnings and narrative,” said John Augustine, chief investment officer at Huntington National Bank in Columbus, Ohio. “To push the stocks higher from here, both earnings and guidance need to beat expectations.”

Here is a graphic looking at valuations for the group compared with the S&P 500 over the last year: https://fingfx.thomsonreuters.com/gfx/mkt/13/1502/1477/forwardPEfaanmgvsSPX.gif

The S&P 500’s fourth-quarter earnings are expected to decline 0.8% and revenue is seen rising 4.4%, according the latest estimates gathered by Refinitiv.

In comparison, Apple earnings for its fiscal first quarter ended in December are seen rising 8.7% while revenue could climb 4.8% year-on-year when it releases results on Jan. 28.

On Jan. 30, Amazon.com is expected to report a revenue rise of 18.7% in the same timeframe, although earnings per share are seen declining more than 30% because it announced it would beef up investment in its package delivery business during the fourth quarter.

The last of the group due to report, Google’s parent Alphabet, is expected to announce a decline of 1.7% for fourth-quarter earnings and a revenue increase of 19.5% in its Feb. 3 release.

Of all the group Morgan, at Synovus, favors Amazon most as he expects strong growth and profit margins in its cloud computing business. Plus, the stock has underperformed its peers, and the S&P 500, with a 8.6% gain since early October.

Kim Forrest, chief investment officer at Bokeh Capital Partners in Pittsburgh favors Microsoft because of its “great suite of products with no true replacement” but also cites a solid outlook for Facebook, Apple, Amazon and Alphabet.

They’re “core holdings for so many managers that they would have to have serious issues for them to be sold. Plus, when people buy an index, they are buying a lot of these companies given the market weight cap of an index,” said Forrest.

But she added: “They need to have a good enough quarter and forecast a better 2020 and be able to list the reasons why it’ll be better than 2019.”

Ken Mahoney, chief executive of Mahoney Asset Management in Chestnut Ridge, New York, said Netflix faces tough new competition from companies including Apple and Walt Disney Co (N:) but the rest of the group have “wide moats,” including consistent growth and strong balance sheets. But he is not buying more of the group, arguing that valuations are too high.

“I’d look to add on some of these names in a pullback,” said Mahoney.