Home
Stocks
‘We feel entitled to artificially inseminate a cow and steal her baby.’ Joaquin Phoenix’s Oscar speech will be welcomed by America’s growing army of vegans
Prev Article Next Article
This post was originally published on this site 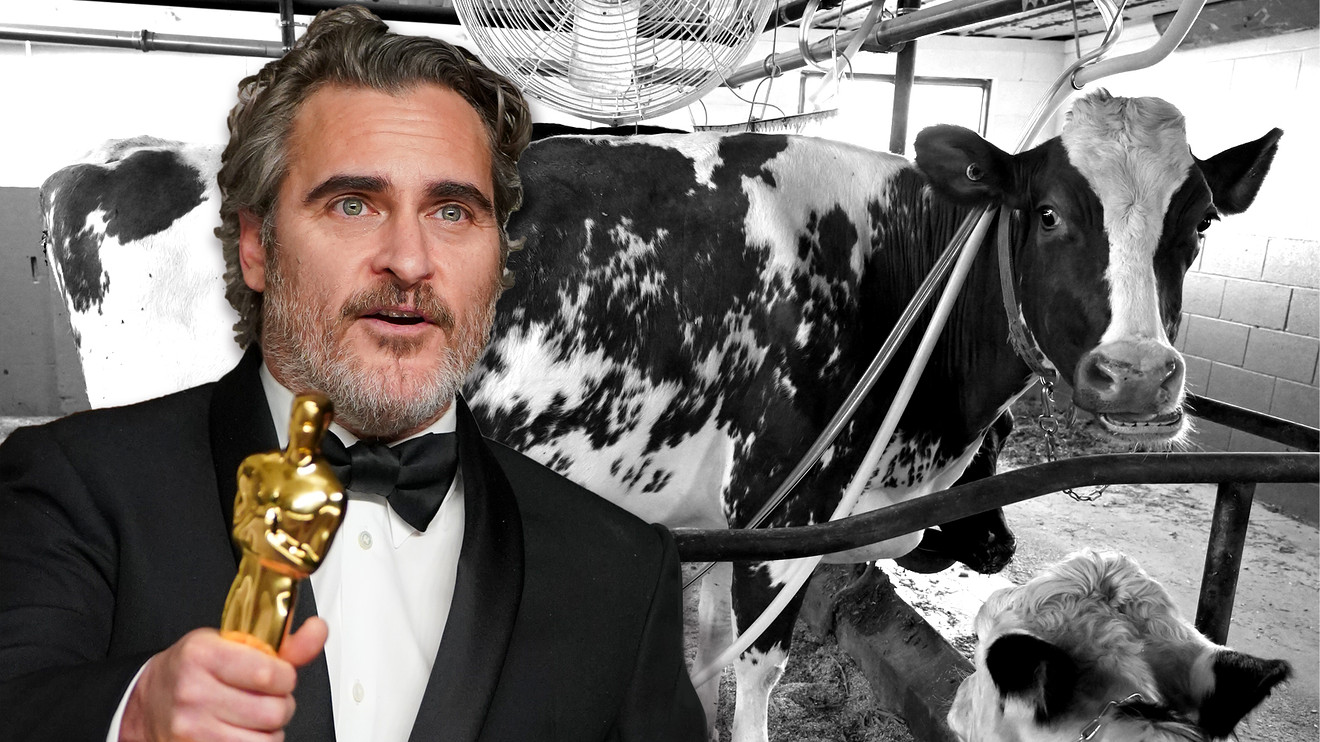 Dairy milk got a bad reception at Sunday’s Academy Awards.

Joaquin Phoenix took aim at dairy farming in his Oscars speech for Best Actor in a Leading Role for “Joker.” “We go into the natural world and we plunder it for its resources. We feel entitled to artificially inseminate a cow and steal her baby, even though her cries of anguish are unmistakable,” he said. “Then we take her milk that’s intended for her calf and we put it in our coffee and our cereal.”

“We fear the idea of personal change, because we think we need to sacrifice something, to give something up,” Phoenix added. “But human beings at our best are so creative and inventive, and we can create, develop and implement systems of change that are beneficial to all sentient beings and the environment.”

The Dairy Farmers of America (DFA), a dairy marketing cooperative, said net sales had declined by $1.1 billion in 2018, from $14.7 billion in 2017 to $13.6 billion in 2018. Dairy industry executives say the milk beverage category remains competitive, while the dairy market as a whole has seen growth. The cooperative did not immediately reply to a request for comment on Phoenix’s speech.

‘We fear the idea of personal change, because we think we need to sacrifice something, to give something up.’

Independent data supports those figures. Dairy milk sales fell to approximately $12 billion last year from $15 billion in 2015, while alternative sources of milk have risen over the same period, according to the market researcher Nielsen. Almond milk sales have increased by nearly 6% to $1.35 billion over the same period, while oat milk soared 662% to nearly $60 million in 2019, Nielsen added.

Market research group Sentient Media crunched more than two dozen studies involving 80,000 Americans and concluded that there are approximately 6.5 million self-identifying vegans in the U.S., and that does not include those who want a lighter meat- and dairy-free diet. That likely why Nielsen data commissioned by the Plant Based Food Association estimates that plant-based food sales surpassed $3.3 billion in 2018, more than doubling from the previous year.

“People change their diets for a lot of reasons: to bring an end to animal farming, to fight for a livable climate, to promote health and personal growth, to be kind,” according to the Sentient Media report. “There is no right answer here. The way we choose to eat will likely change a number of times over the course of our lives, and that’s okay. Ethical eating works like a spectrum, one that is trending towards compassion.”

Sales of plant-based varieties have grown 6% over the past year, now making up 13% of the entire milk category, according to separate data released last year from the Good Food Institute and Plant Based Foods Association. Sales of cow’s milk, meanwhile, have declined 3%. In fact, 11% of consumers say they’re trying to consume less dairy, according to the NPD Group.

Why artificially inseminate heifers? This University of Kentucky paper aims to answer that question: “It’s quite simple: to increase the number of genetically superior heifers available for herd replacement and sale,” it said. “However, the bottom line is heifer AI puts the dairy farmer in a position where he or she has plenty of genetically superior heifers available for replacement and sale.”

“It makes the process safer for consumers and controls the spread of disease,” the paper from the university’s College of Agriculture added. “Certainly, there are many other valid reasons for using heifer artificial insemination: higher conception rate, increased semen value, calving ease, controlling transfer of reproductive diseases, safety, controlled breeding, better records, and accurate due dates.”

Phoenix and other critics of dairy farming argue that it treats the animals like they’re machines.

Still, many people feel so strongly about alternative milk varieties — whether for reasons relating to health, the environment or animal rights — that they’re willing to pay big money for non-dairy varieties, particularly oat milk. When the Swedish oat milk brand Oatly sold out of its Barista Edition Oatmilk variety in December, one Amazon AMZN, +2.63%  seller posted a 12-pack of the milk cartons for $226 (a 32-ounce carton retails for $4.99).

The plant-based market’s best-selling alternatives — almond milk and soy milk — cost almost double at $4.29 a half-gallon (64-ounces), respectively, compared to $2.17 for regular dairy milk, according to a price check by FreshDirect, the online grocery delivery service that delivers in the New York metropolitan area, and areas in Connecticut, Jersey, Pennsylvania and Washington, D.C. Oat milk is almost 2.5 times the cost of dairy milk ($5.29 a half-gallon).

Last year, the dairy company Dean Foods Co. voluntarily filed for Chapter 11 bankruptcy protection, saying it was working toward an “orderly” sale of the company. “Consumers want to reduce, not eliminate, the amount of animal proteins we consume,” Darren Seifer, a food consumption business analyst at NPD Group, told MarketWatch at the time. “They’re pro-protein, they just don’t want to have more meat or more milk to achieve these goals.”

People are certainly becoming more interested in meat and dairy alternatives. Beyond Meat BYND, +2.83%, the plant-based meat company, is up 85% since its initial public offering in May 2019, after soaring nearly 238% in the months after its IPO. More large food companies want a slice out of the vegetarian and vegan market: Meat producer Tyson Foods Inc. TSN, +1.53%   also entered the alternative protein market last year, unveiling new products under the Raised & Rooted brand.

Phoenix, meanwhile, called on people during his speech Sunday night to find alternative sources to dairy farming. “We fear the idea of personal change, because we think we need to sacrifice something; to give something up,” he said. “But human beings at our best are so creative and inventive, and we can create, develop and implement systems of change that are beneficial to all sentient beings and the environment.”