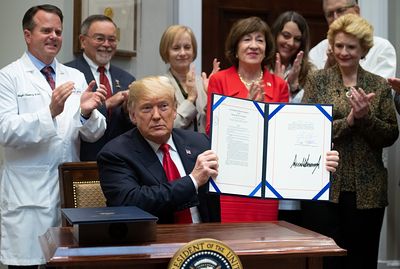 Predicting what President Donald Trump is likely to say or tweet on any given day has never been easy. The State of the Union address is no exception — but it’s a safe bet the president will touch on several issues that directly affect Americans’ bank accounts in Tuesday’s speech.

Here’s a look at what experts say will likely be some of the president’s money-related talking points:

Drug prices — and potentially a plan to lower them

Lowering drug pricing has been a priority for the Trump Administration. “It’s unacceptable that Americans pay vastly more than people in other countries for the exact same drugs, often made in the exact same place,” Trump said in last year’s State of the Union address.

This year, Rob Smith, a director at Capital Alpha Partners, said he expects drug pricing to be “heavily featured” in the speech. “It could be that he mentions it and then talks about what he’s done so far or it could be that regulation comes out tomorrow,” Smith said.

Also see: How the stock market has reacted to State of the Union speeches

If drug pricing regulation is discussed on Tuesday night, it is likely that Trump will introduce a plan tied to an International Pricing Index (IPI). Essentially, a plan tied to an IPI would impose price caps on drugs “to ensure we don’t pay more than ‘x rate’ (the rate implied by the index),” Smith said. This plan would target about 3% of drug sales and analysts say would only significantly affect a few companies.

“It makes sense for them [the Trump Administration] to double down on IPI in speech because it is time to unveil a specific plan,” Smith said. In December the House passed House Speaker Nancy Pelosi’s bill aimed at lowering drug costs. Trump said at the time that he would veto the measure.

The theme for this year’s State of the Union is “The Great American Come Back”, according to a senior Trump official. As the name suggests, Trump is likely to tout the booming economy and the unemployment rate, which is at a 50-year low.

That said, continuing on the path of expansion could require greater investments in infrastructure, some say. But building better roads, highways and bridges may require workers with specialized skill sets.

“As the government issues more [infrastructure] grants to provide updates to everything from airports to roads, plumbers and electricians are critical,” he said.

“Not taking anything away from liberal arts degrees, but society has forgotten that trade and technical career schools are just as important,” he added. Gonzalez said he is satisfied with the actions the president has taken to fund more vocational schools. However, he would like to hear how Trump will work with the Dept. of Education and Labor to ensure “underrepresented veterans” have access to an affordable post-secondary education.

Trump has brought up what is known as the School Choice Act on several occasions, including during last year’s State of the Union. The SCA would distribute nearly $5 billion in federal tax credits to individuals and businesses for donations made to groups offering scholarships to private schools as well as trade schools. The proposal would offer a dollar-for-dollar tax credit for individuals and businesses that donate to scholarship groups approved by the state, meaning that every dollar given takes a dollar off the donor’s tax bill, the Associated Press reported.

Given the government’s current budget deficit is more than $13.3 billion, if tax credits are discussed, there should be a clear plan outlining how they will be paid for, said Marc Goldwein, senior vice president of policy at the nonpartisan Committee for a Responsible Federal Budget. “The thing with tax credits is he talks about it but doesn’t have a plan,” for how to make up for the missing tax revenue, said Seth Hanlon, a senior fellow at the Center for American Progress.

Senior Trump economic adviser, Larry Kudlow, has repeatedly said that a second version of tax cuts will be unveiled just in time for the 2020 election. In November, he said that “it will be released as a strategic pro-growth document for the campaign,” CNBC reported. “We want to see middle-income taxpayers get the lowest possible rates.”

“We keep on hearing rumors about new tax plan 2.0 in the next 90 days,” Hanlon said. A new round of tax cuts could offer breaks for middle-class Americans, “but who knows.”

The State of the Union address will be broadcast live Tuesday night at 9 p.m. Eastern Time on all major news channels.