Home
Stocks
When blockchain arrives in fintech, Visa, PayPal and other companies will feel the pain
Prev Article Next Article
This post was originally published on this site

Finance is changing rapidly through mergers and acquisitions, but not rapidly enough. There will be tremendous pressure for traditional payment processors to get with the times and adopt blockchain, or else they will be left behind by lower-cost competitors.

No benefits to consumers, merchants

The real value to consumers and merchants has yet to be seen. Square SQ, +0.12%  may have replaced cash registers, but the fees the company charges are as old-school as ever. Square charges 2.6% plus 10 cents per transaction.

Similarly, PayPal PYPL, +0.18%  may have the lead in the U.S. as a fintech platform, though it does little to innovate in a way that lowers costs. In fact, PayPal charges merchants even if a customer is refunded. After acquiring Venmo, the peer-to-peer (P2P) payment app celebrated as a way to send free payments, PayPal continues to charge merchants 2.9% plus a 30-cent transaction fee when collecting from the Venmo app.

From that perspective, Venmo and P2P apps don’t really innovate at all, as retailers coughed up a whopping $108 billion in electronic-payment costs last year.

David Ritter, a financial analyst, summed it up well when he said: “Square merchants with low average tickets may fuss over higher costs, but per-transaction fees are typical of alternatives.” Meaning: Merchants have no other choice.

This is important because we have not yet seen the true disruption in finance, despite ongoing sprees of fintech deals. Although Visa, Mastercard, PayPal and Square are acquiring tech startups to help maintain their current positions, the purchases will not allow for the kind of growth that makes for meaningful gains.

In fact, Visa’s acquisition of Plaid is dilutive and won’t be accretive to earnings for an estimated three years.

Blockchain is the answer

According to a recent survey, 75% of consumers have used a fintech service. Of those, competitive fees and rates are their top priority. In addition, 68% of consumers are willing to try a financial proposition from a non-financial company, which is a risk to incumbents.

Two examples of companies that are innovating to lower prices in fintech include Robinhood and Alipay. Both took major market share by simply lowering prices. Robinhood allows for free stock trades, while Alipay charges merchants 0.55%, compared with the typical 3% charged by credit-card companies.

This resulted in Alipay quickly growing to 1 billion users since launching in 2008. Compare that to PayPal’s PYPL, +0.18% 275 million users in 20 years since its 1998 launch. Alipay is the kind of growth you want to see as an investor. Tencent’s TCEHY, -3.66%  WeChat has also crossed the 1 billion user mark with many using WePay. 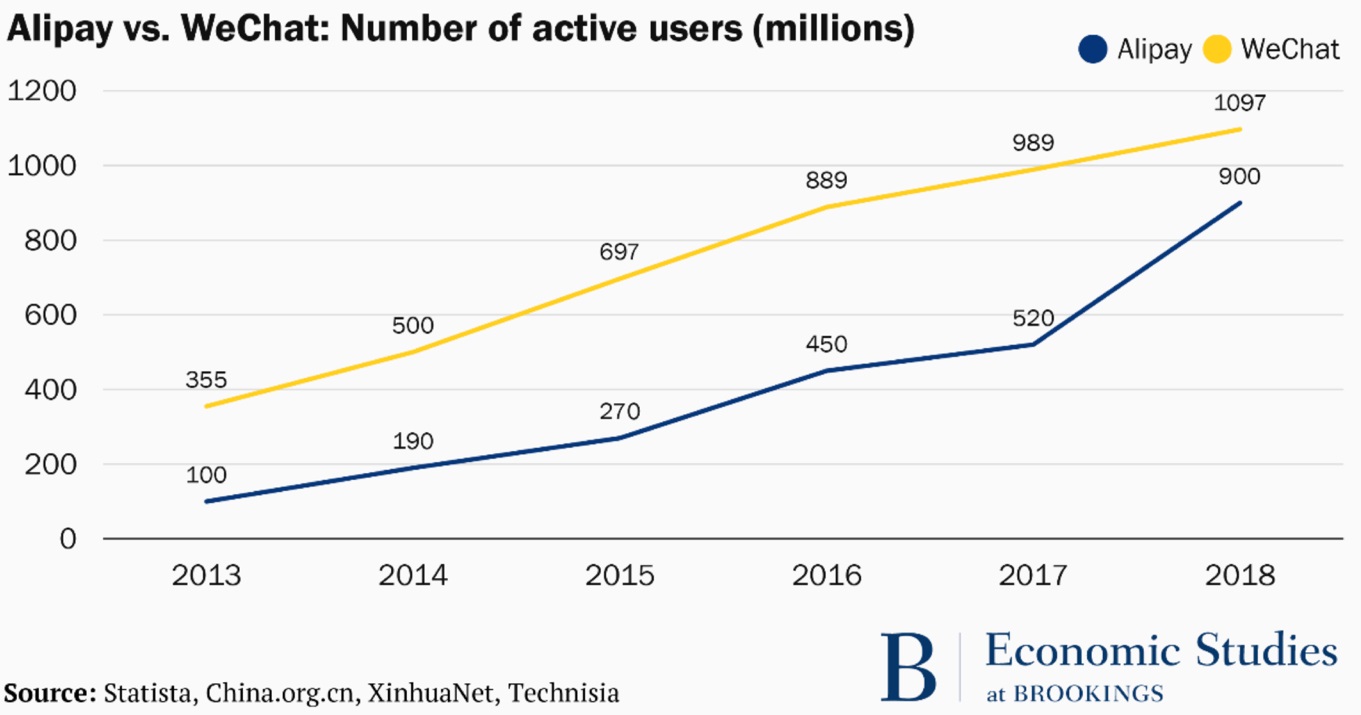 In fact, digital payments are so wildly successful that the People’s Bank of China has had to forbid discrimination against cash by merchants who will accept only digital payments.

According to some estimates, the savings in merchant fees could be as much as $43 billion if the United States had third-party payment apps such as Alipay and WePay. That is because for every $100 spent on a credit-card purchase, $2.20 goes to the issuing bank, 23 cents to a payment processor, 19 cents to the acquiring bank and 13 cents to the card network.

Meanwhile, PayPal’s $4 billion acquisition of Honey, which helps users discover rewards and deals while shopping through a browser extension, is in sharp contrast to the fintech companies in China that have lowered fees. The PayPal-Honey acquisition is meant to drive the same type of higher payments from customers as do many of PayPal’s other acquisitions, such as Braintree, Xoom and Hyperwallet. That strategy places an easy target on PayPal, as new blockchain startups gather strength.

Deploying blockchain systems will remove third-party centralization networks for small to medium-size businesses in lieu of peer-to-peer networks. While there is debate about the viability of bitcoin BTCUSD, -0.33%, blockchain is very much a reality, and can be secured by so-called stablecoins if merchants prefer to be backed by the national currency.

Interestingly enough, banks are leading the way with blockchain. J.P. Morgan Chase JPM, -0.44%  has been working on a blockchain system since 2015. It revealed JPM Coin in 2019, a stablecoin tied to the U.S. dollar. PayPal, Square, Mastercard and Visa are also pioneering blockchain projects.

As developers of the blockchain system have pointed out, the ultimate goal is to have JPM Coin connect private ledgers to a public blockchain. These developers believe that would put major pressure on other financial institutions and fintech companies in about five years.

Digitization in the finance industry is built atop age-old infrastructure and ignores the most obvious area in need of disruption: transaction fees. Visa and Mastercard are making acquisitions to remain relevant and competitive, while PayPal and Square are getting on more devices with peer-to-peer apps such as Venmo and Cash App.

Those moves won’t lead to massive growth. An overhaul of the infrastructure via blockchain will take some time, and only then will investors enjoy serious investment returns.

The writer owns no shares of companies mentioned in this article.