Home
Stocks
: Worried about COVID-19? New $399 Apple Watch tests blood-oxygen levels. Other products do this for $17 — but what does the FDA say?
Prev Article Next Article
This post was originally published on this site 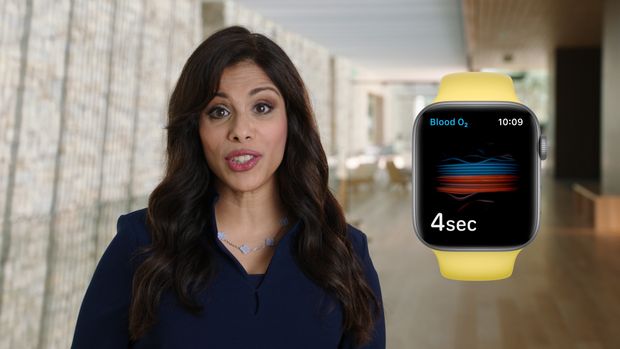 Health was clearly on the minds of the designers behind the new Series 6 Apple Watch AAPL, +0.16%.

Sleep motion sensors, hand-washing detection and a blood-oxygen sensor are all functions of the new model unveiled Tuesday, which has a $399 starting price tag.

But the blood-oxygen sensor has garnered the most attention.

“The new health sensor in Series 6 shines red and infrared light onto your wrist and measures the amount of light reflected back. Advanced algorithms use this data to calculate the color of your blood, which indicates the amount of oxygen present,” Sumbul Desai, vice president of health at Apple and a practicing doctor, said atTuesday’s event. “The new blood oxygen app lets you take a measurement in just 15 seconds.”

Apple is not marketing the new function of the watch as a medical device, that’s because it doesn’t currently have the U.S. Food and Drug Administration’s approval to do so.

“Blood Oxygen app measurements are not intended for medical use, including self-diagnosis or consultation with a doctor, and are only designed for general fitness and wellness purposes,” reads a product disclaimer for the Series 6 Watch.

For instance, the FDA previous said that electrocardiogram readings, or ECGs, that aim to notify users of irregular heart rhythms, should not replace traditional diagnostic methods.

(Apple did not respond to MarketWatch’s inquiry.)

The FDA’s role raises an important point for consumers. Some online reviews may say a blood-oxygen monitor is “FDA-approved,” but they likely mean that the product is “FDA registered” or received “FDA clearance. They are very different from being approved for the purpose of accurately detecting the amount of oxygen in your blood.

The FDA classifies devices according to risk: Class I, Class II and Class III.

The highest-risk devices (Class III), such as mechanical heart valves, generally require FDA approval of a premarket approval application before marketing, according to the FDA. “Manufacturers must demonstrate with sufficient, valid scientific evidence that there is a reasonable assurance that the devices are safe and effective for their intended uses.”

The FDA “clears” rather than “approves” Class II moderate-risk medical devices such as pulse oximeters “for marketing once it has been demonstrated that the device is substantially equivalent to a legally marketed predicate device that does not require premarket approval.”

And Class I? These include non-powered breast pumps, elastic bandages, tongue depressors, and exam gloves, and “are subject to general controls only, and most are exempt from premarket notification requirements,” according to the FDA.

For instance, in its review of the AccuMed CMS-50D1 Pulse Oximeter ($33 on Amazon), CNET noted that it’s “FDA-cleared, meaning it should work as advertised when it comes to monitoring your pulse rate and oxygen saturation level.” 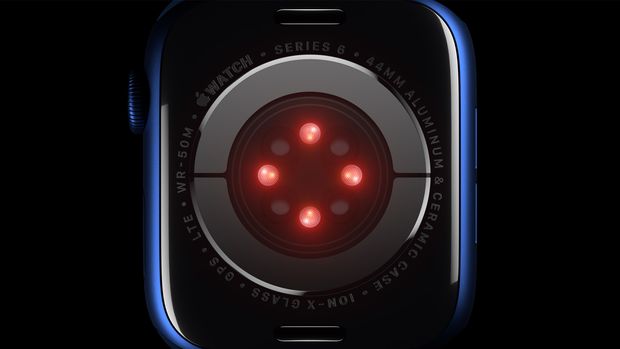 The blood-oxygen sensor on the Series 6 Apple Watch.

The less expensive Apple Watch, the SE model, which was also unveiled on Tuesday, shares many of the same functions as the Series 6 watch, but does not have the blood oxygen sensor.

And: Apple announces new iPad Air, which will start at $599

Typically a healthy range of oxygen levels is between 95% to 100%, according to the Mayo Clinic. Values below 90% are considered low and below 60% “usually indicate the need for supplemental oxygen.”

One of the many symptoms of coronavirus is shortness of breath or difficulty breathing which could be the result of low oxygen levels.

“ Typically a healthy range of oxygen levels is between 95% to 100%. Values below 90% are considered low and below 60% may indicate the need for supplemental oxygen. ”

But it’s not always the case that patients who have low oxygen levels feel shortness of breath or difficulty breathing.

“What’s been intriguing about COVID is people who have no symptoms show up in the emergency room with oxygen stats in the 80s,” said Thomas Russo, chief of the division of infectious disease at the University at Buffalo.

That’s particularly the case among the COVID pneumonia patients, according to Richard Levitan, an emergency room doctor, who volunteered for 10 days at the Bellevue Hospital hospital in New York in April.

— Thomas Russo, chief of the division of infectious disease at the University at Buffalo

“As the inflammation from COVID pneumonia starts, it causes the air sacs to collapse, and oxygen levels fall,” he said in a New York Times opinion piece published in April. “Yet the lungs initially remain ‘compliant,’ not yet stiff or heavy with fluid. This means patients can still expel carbon dioxide — and without a buildup of carbon dioxide, patients do not feel short of breath.”

By the point, however, many these patients were admitted to the hospital their oxygen levels were so low they needed to be put on a ventilator, he wrote.

That’s why some doctors have recommended that more people purchase pulse oximeters so that they can keep tabs on oxygen levels. 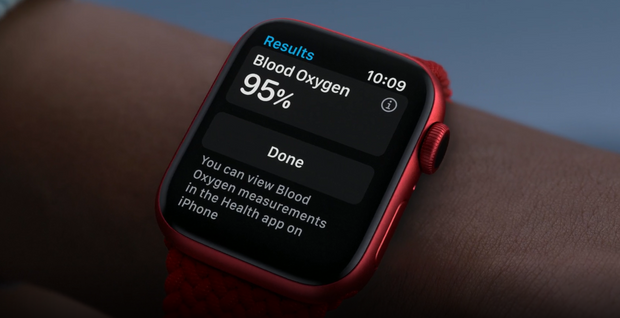 Is the Apple Watch too expensive? Pulse oximeters can be purchased for as little as $17 on Amazon.

These can be purchased for as little as $17 on Amazon AMZN, +1.71%. In other words, you don’t necessarily need to pre-order the new Apple Watch if you’re interested in monitoring your oxygen levels.

But if more people who buy the new Apple Watch use the new technology, assuming it’s accurate,  it could prompt more people to get properly tested for coronavirus or “trigger a call to their doctor”, said Russo.

Take it all with a grain of salt, this pulmonologist warns

What about the new Apple Watch’s accuracy? “Assuming it gives reasonable information with a 4% error rate, then it might be a useful tool to help monitor diseases,” said Timothy Connolly, a pulmonologist and medical director of Respiratory Care Services at Houston Methodist Hospital in Texas.

“What we don’t want is for people to go, ‘Oh s—! I’m looking at my oxygen levels and it’s low, it must be Covid.’” he said. “It has got to be taken with a grain of salt. I wouldn’t encourage people to look at their oxygen level as a diagnostic tool.”

“ ‘If someone gets an Apple Watch and they see they’re at 86% oxygen levels, they need to be evaluated by a doctor because it could be a billion different things.’ ”

“If someone gets an Apple Watch and they see they’re at 86% oxygen levels, they need to be evaluated by a doctor because it could be a billion different things,” he said.

“I told him, ‘If that number shifts downward I need to know because that’s when you might need to go to the hospital. If stays in the same range, I don’t care how bad you feel, stay at home.’”

If oxygen levels continue to drop, a patient is mostly likely in better hands in the hospital than at home, but it does not necessarily mean that they need to be intubated, Connolly told MarketWatch.

Apple is partnering with the investigators of the Seattle Flu Study and faculty from the University of Washington School of Medicine “to learn more about COVID and understand the interplay with influenza,” Desai, Apple’s vice president of health, said.

“We will explore how changes in blood oxygen and heart rate can be early signals of the onset of these respiratory conditions,” she said.