Home
Market
Xi Rallies China Behind Shenzhen as Global Tech Fight Heats Up
Prev Article Next Article
This post was originally published on this sitehttps://d1-invdn-com.akamaized.net/content/pic708169b7019215a1fab6ddb28bfe2fb3.jpg 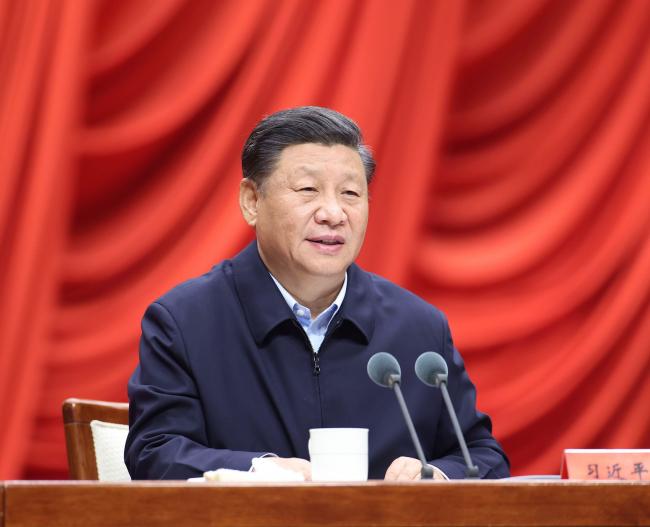 The Chinese president reaffirmed his commitment to “opening up and reform” as a strategy for gaining economic advantage in a 50-minute speech Wednesday to mark the 40th anniversary of Shenzhen’s establishment as a special economic zone. With hundreds of local officials and executives present including Huawei Technologies Co. founder Ren Zhengfei, and Vice Premier Liu He looking on, Xi called for the making of the southern metropolis into a “model city for a great, modern socialist country.”

“We need to unswervingly implement an innovation-driven development strategy to foster new engines and new trends, so as to build a technological and industrial innovation high-ground with global influence,” Xi said, in remarks that didn’t mention China’s disputes with the U.S. and made only passing reference to “many unprecedented challenges” from abroad.

The speech represented a high-profile backing of the companies and leaders in the so-called Greater Bay Area, a designation that’s meant to to push China into higher-quality manufacturing and better integrate the former colonies of Hong Kong and Macau into the mainland. That means bolder policies to knit together several cities — including Shenzhen, Hong Kong and Macau — to create a regional powerhouse rivaling Tokyo Bay or Silicon Valley.

The speech did little to move the broader stock market, with the CSI 300 Index down 0.6% as of the mid-day break. The index of stocks in Shanghai and Shenzhen, which surged 3% on Monday in anticipation of Xi’s visit, is within 1% of a five year high.

Xi’s speech visit also comes at a demanding time for China. The ongoing trade war with the U.S. and pandemic-driven economic downturn have increased the urgency of Beijing’s efforts to boost local consumption and close the technology gap in strategic industries. In recent months, Xi has urged a shift to a “dual-circulation” economy fueled by domestic growth and supplemented by foreign technology and investment.

Also helping to fuel inflows into Chinese assets are signs of a continued recovery in the world’s second-largest economy as the pandemic abates. China’s exports rose for the fourth straight month in September, while the nation’s stock market topped $10 trillion for the first time since 2015 on Tuesday.

During a sweep through manufacturing hub Guangdong province this week, the Chinese leader gave an inkling of what’s to come. He urged a greater focus on quality to overcome increased global uncertainty, and made a pitch for “self-reliance” during a visit to a local technology company, according to the official Xinhua News Agency.

Xi’s trip through the Pearl River Delta, which has an annual economic output larger than Indonesia, “is a huge signal that he wants to follow up on opening-up,” said Wang Huiyao, an adviser to China’s cabinet and founder of the Center for China and Globalization in Beijing. “It’s a symbol of more openness. I’m expecting him to talk about the Greater Bay Area, policy incentives as well as how Hong Kong and China can collaborate.”

Shenzhen could be the center of this new universe, said Hao Hong, chief strategist for Bocom International in Hong Kong. The once-sleepy fishing village that’s now home to Huawei Technologies Co. and Tencent Holdings (OTC:TCEHY) Ltd. could be given more autonomy and become the financing center for technology innovation.

Xi is scheduled to meet the leaders of Hong Kong and Macau in Shenzhen, as he seeks to leverage the former colonies’ separate trade and legal systems to help make the broader region more competitive.

Just like it was four decades ago, the city will again be a testbed for reform — this time in land, human capital and capital markets, including the launch of a digital yuan. That’s why investors sent the Hong Kong and Chinese stock markets rallying earlier this week when Xi’s speech was announced, according to Hao.

“It’s a comprehensive reform aiming at elevating the city to the center of the Greater Bay Area,” he said. “The market is liking what it sees and is excited by this news.”